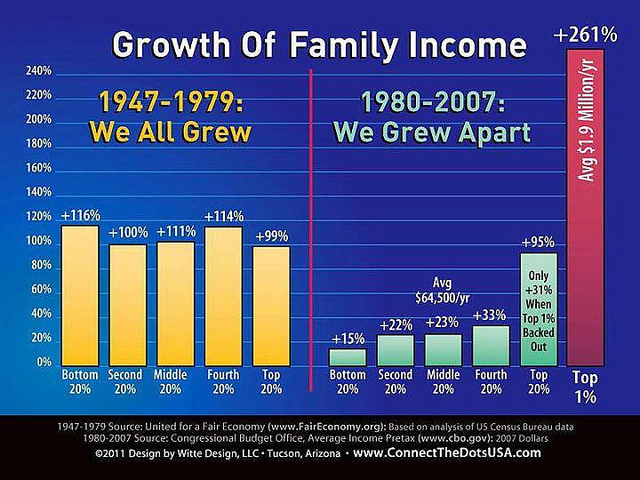 One common way of measuring income inequality is to rank all households by income, from lowest to highest, and then to divide all households into five groups with equal numbers of people, known as quintiles. This calculation allows for measuring the distribution of income among the five groups compared to the total. The first quintile is the lowest fifth or 20%, the second quintile is the next lowest, and so on. Income inequality can be measured by comparing what share of the total income is earned by each quintile.

The U.S. economy has a relatively high degree of income inequality by global standards. As Table 14.7 shows, based on a variety of national surveys done for a selection of years in the last five years of the 2000s (with the exception of Germany, and adjusted to make the measures more comparable), the U.S. economy has greater inequality than Germany (along with most Western European countries). The region of the world with the highest level of income inequality is Latin America, illustrated in the numbers for Brazil and Mexico. The level of inequality in the United States is lower than in some of the low-income countries of the world, like China and Nigeria, or some middle-income countries like the Russian Federation. However, not all poor countries have highly unequal income distributions; India provides a counterexample.

Visit this website to watch a video of wealth inequality across the world.

The data on income inequality can be presented in various ways. For example, you could draw a bar graph that showed the share of income going to each fifth of the income distribution. Figure 14.8 presents an alternative way of showing inequality data in what is called a Lorenz curve. The Lorenz curve shows the cumulative share of population on the horizontal axis and the cumulative percentage of total income received on the vertical axis.

Every Lorenz curve diagram begins with a line sloping up at a 45-degree angle, shown as a dashed line in Figure 14.8. The points along this line show what perfect equality of the income distribution looks like. It would mean, for example, that the bottom 20% of the income distribution receives 20% of the total income, the bottom 40% gets 40% of total income, and so on. The other lines reflect actual U.S. data on inequality for 1980 and 2011.