Article I, Section 9, Clause 4 of the U.S. Constitution states:

No Capitation, or other direct, Tax shall be laid, unless in proportion to the Census or Enumeration herein before directed to be taken.

However, this authorization to collect taxes in the original Constitution has several restrictions. It required taxes to be uniform throughout the country. The Constitution also states no “Capitation, or other tax” meaning a poll tax or head count tax, could be imposed unless it proportional to the population of the state. Income taxes would not fall into this category. In 1913, the Sixteenth Amendment to the U.S. Constitution was ratified which authorizes the collection of taxes based on income by the federal government.

The Congress shall have power to lay and collect taxes on incomes, from whatever source derived, without apportionment among the several States, and without regard to any census or enumeration.

Graduated income tax brackets are deemed to be fairer than a flat tax system because lower income individuals and families typically need more of their income to sustain them. As income increases, less of that income is used for the basic necessities like food, clothing, and housing. Increased income also increases what is referred to as disposable income.

The Merriam-Webster dictionary defines disposable income as, “Income that is left after paying taxes and for things that are essential, such as food and housing.” (Merriam-Webster.com. 2018. https://www.merriam-webster.com (20 July 2018) The current tax code is designed to have those with more disposable income carry the higher burden of income taxes because they can afford to do so. Almost half of the tax payers pay no federal income tax, but they still do pay a significant amount in taxes nevertheless. An article published on April 18, 2018 by Market Watch titled “46% of Americans pay no federal income tax-here’s why” by Quentin Fottrell confirms the data pointing out that, “All but the top 20% of American families pay more in payroll taxes than in federal income taxes, according to Treasury Department data, cited by the Pew Research Center.”

INCOME TAX PAYMENT PROCESS: The general income tax payment process for a typical taxpayer that is an employee receiving a paycheck from their employer is as follows:

FILING STATUS: A review of the tax brackets chart above indicates three different tax filing statuses; unmarried individuals, married individuals filing joint returns, and heads of households. Not mentioned above is married filing separately. Filing status affects tax rates. Married couples have a choice on how to file, which is usually by their respective incomes. Below is a brief summary of 4 of the most common filing statuses.

STANDARD DEDUCTION, ITEMIZED DEDUCTIONS, TAX CREDITS, & TAXABLE INCOME: The amount one pays in income taxes is not totally based on a taxpayer’s income alone. The standard deduction or itemized deductions play an important role in the income tax system. They are used to determine what a taxpayer’s taxable income will be. That, in turn, determines what tax bracket a taxpayer will be in and that in turn determines what tax rate the taxpayer will pay. (Before the new Tax Cuts and Jobs Act of 2017 law was passed, there were also personal and dependent exemptions allowed. Those were eliminated in 2018.) Deductions are allowed under the tax code for certain expenses that taxpayers incur in that tax year.

The tax code is often used to encourage certain behaviors like buying a home or purchasing an electric automobile. To incentivize taxpayers to do certain things, deductions and tax credits are made available which lower the taxable income of taxpayers and thereby lower their income taxes.

The 2018 standard deduction for taxpayers is as follows:

Deductions are different than tax credits. Deductions are used to determine what the taxable income. For example, if a single taxpayer earns $50,000 and takes the standard deduction of $12,000, that taxpayer’s taxable income is $38,000. The tax rate for $38,000 is 12% versus the tax rate for $50,000 which is 22%. The very basic math calculation is the taxpayer will owe $4,560 in federal income taxes. Now, if a taxpayer also has a tax credit, that credit will be applied to the actual tax amount owned. Taking our above example, if this taxpayer also has a dependent child that the taxpayer cares for and supports, there is a $2,000 tax credit allowed. The taxpayer will now pay $2,560 in federal taxes after taking the tax credit.

W-4 FORM: The W-4 form is used by an employer to determine how much they will withhold from an employee’s paycheck. Withholding refers to the amount of money an employer holds as prepayment of income taxes and FICA contributions from an employee’s paycheck and sends to the New York State Department of Taxation and Finance and the Internal Revenue Service on behalf of the employee. To make this determination, all employees fill out a W-4 form with their employers. The information the employee provides on the form provides the employer with the correct information to determine how much the employer should withhold from the employees paycheck for income tax purposes.

The W-4 form gives an employee the opportunity to choose how the number of allowances they want to claim. Allowances are the anticipated deductions and/or credits the employee anticipates they will claim on when they file their federal and state income tax forms. The more allowances a taxpayer claims, the less the employer will withhold for taxes from the employees paycheck. This can result in more or less money in the taxpayer’s paycheck, but it can also determine how much of a refund or taxes the taxpayer may own when they file. 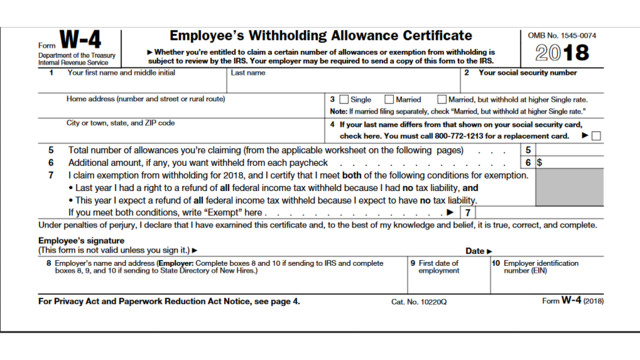 W-2 FORM: The W-2 form is formally called the Wage and Tax Statement form. It is the official record of how much a taxpayer earned from a particular employer in that tax year. It provides the taxpayer and the state and federal income tax agencies, along with the Social Security Administration, with the amount of gross income earned by the employee, the withholdings for state and federal taxes, as well as FICA. It also provides information regarding withholdings for health care benefits paid for and provided to the employee by the employer. It shows the amount of contributions made by and employee for retirement. The W-2 must be sent to the employee by the employer by the end of January following the tax year. Employees must use their W-2(s) to file their state and federal tax returns.

FEDERAL INSURANCE CONRIBUTIONS ACT (FICA): While already discussed in Chapter 9 in regards to determining income for the purposes of spousal and child support obligations, FICA is worth discussing here again. FICA is the acronym for the Federal Insurance Contributions Act. This is the law passed in 1935 that created Social Security. FICA is a contribution, (not technically a tax) that all employees and employers pay for Social Security and Medicare benefits. It is withheld from an employee’s paycheck and paid to the federal government. Employers also match these payments. If a person is self-employed, they pay both the employee and employer amount. The percentage of an employee’s income that is used to determine FICA is 6.2% for Social Security plus 1.45% for Medicare. There is a cap on income at which point the 6.2% for Social Security is no longer deducted from an employee’s paycheck. That amount in 2018 is $128,700 and can change each year pursuant the tax code.

As mentioned earlier in this chapter, approximately 46% of taxpayers do not pay federal income taxes. However, all taxpayers pay FICA. While FICA is technically not called a tax, it is a significant withholding from all taxpayers incomes. It is based on the taxpayer’s gross income, not taxable income. 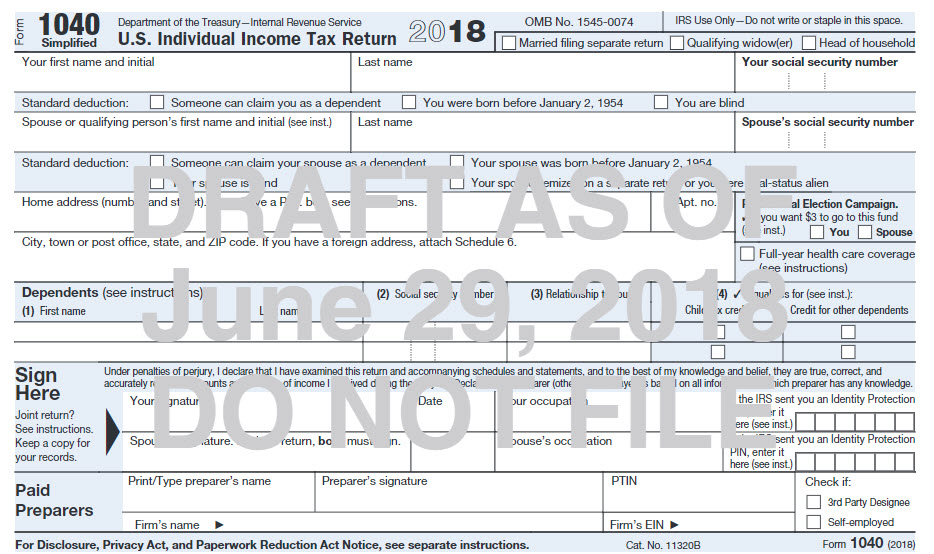 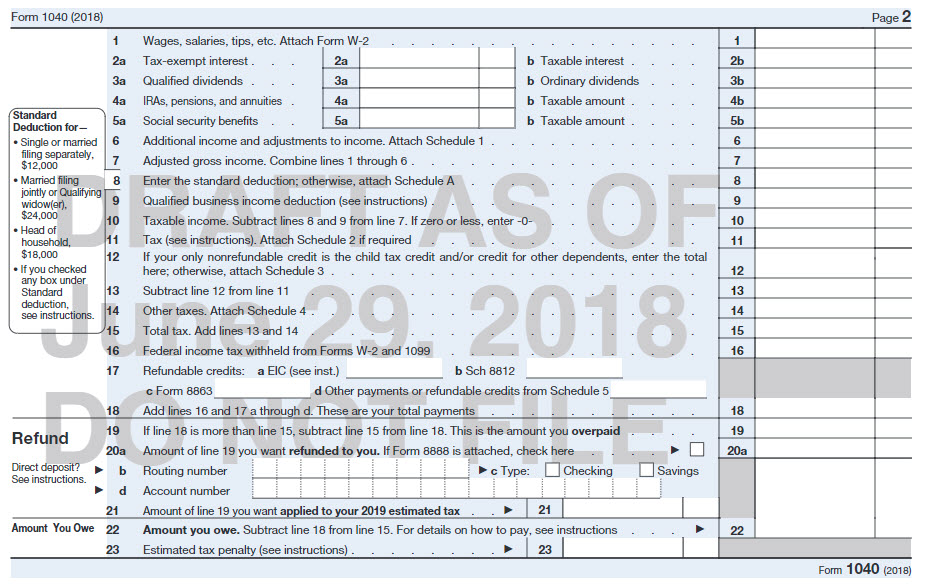 The basic NYS personal income tax form is the IT-201-Resident Income Tax Return. Below is page one of four pages of the 2017 version of this return.