Cancer is the name given to a collection of related diseases. In all types of cancer, some of the body’s 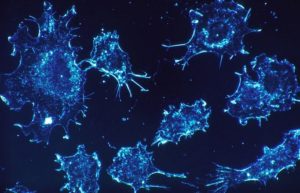 cells begin to divide without stopping and spread into surrounding tissues.

Cancer can start almost anywhere in the human body, which is made up of trillions of cells. Normally, human cells grow and divide to form new cells as the body needs them. When cells grow old or become damaged, they die, and new cells take their place.

When cancer develops, however, this orderly process breaks down. As cells become more and more abnormal, old or damaged cells survive when they should die, and new cells form when they are not needed. These extra cells can divide without stopping and may form growths called tumors.

Cancerous tumors are malignant, which means they can spread into, or invade, nearby tissues. In addition, as these tumors grow, some cancer cells can break off and travel to distant places in the body through the blood or the lymph system and form new tumors far from the original tumor.

Cancer is caused by changes to genes that control the way our cells function, especially how they grow and divide.

Genetic changes that cause cancer can be inherited from our parents. They can also arise during a person’s lifetime as a result of errors that occur as cells divide or because of damage to DNA caused by certain environmental exposures. Cancer-causing environmental exposures include substances, such as the chemicals in tobacco smoke, and radiation, such as ultraviolet rays from the sun.

Metastatic cancer has the same name and the same type of cancer cells as the original, or primary, cancer. For example, breast cancer that spreads to and forms a metastatic tumor in the lung is metastatic breast cancer, not lung cancer.

Tissue Changes That Are Not Cancer

Not every change in the body’s tissues is cancer. Some tissue changes may develop into cancer if they are not treated, however. Here are some examples of tissue changes that are not cancer but, in some cases, are monitored:

Hyperplasia occurs when cells within a tissue divide faster than normal and extra cells build up, or proliferate. However, the cells and the way the tissue is organized look normal under a microscope. Hyperplasia can be caused by several factors or conditions, including chronic irritation.

Dysplasia is a more serious condition than hyperplasia. In dysplasia, there is also a buildup of extra cells. But the cells look abnormal and there are changes in how the tissue is organized. In general, the more abnormal the cells and tissue look, the greater the chance that cancer will form.