Before we can dive into a study of Bach’s cantatas, we need to learn about an important element of Lutheran sacred music: the chorale. Bach worked these chorales or hymn tunes into many of his church cantatas, and the three movements from Cantata 140 Wachet auf all make use of the chorale tune on which that cantata is based.

A chorale is a melody to which a hymn is sung by a congregation in a German Protestant Church service. The typical four-part setting of a chorale, in which the sopranos (and the congregation) sing the melody along with three lower voices, is known as a chorale harmonization. In certain modern usage, this term may include classical settings of such hymns and works of a similar character.

Chorales tend to be simple and singable tunes. The words are often sung to a rhyming scheme and are in a strophic form (the same melody used for different verses). Within a verse, many chorales follow the AAB pattern of melody that is known as the German bar form. 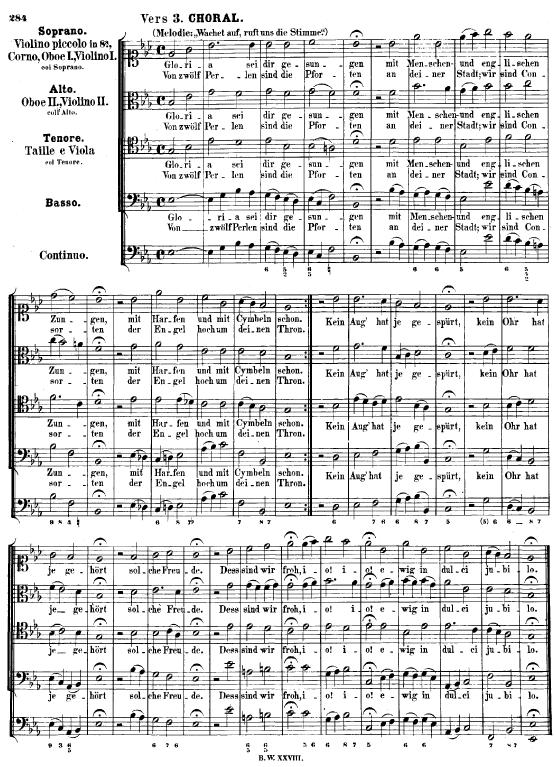 Starting in 1523, Martin Luther began translating worship texts into German from the Latin, so that the people could understand, continue to learn and participate. This created an immediate need for a large repertoire of new chorales. He composed some chorales himself, such as A Mighty Fortress. For other chorales he used Gregorian chant melodies used in Roman Catholic worship and fitted them with new German texts, sometimes adapting the same melody more than once. For example, he fitted the melody of the hymn “Veni redemptor gentium” to three different texts, “Verleih uns Frieden gnädiglich,” “Erhalt uns, Herr, bei deinem Wort,” and “Nun komm, der Heiden Heiland.” A famous example is “Christ lag in Todes Banden,” which is based on the tune of the Catholic Easter Sequence, “Victimae Paschali Laudes.” As early as 1524, Johann Walter published Eyn geystlich Gesangk Buchleyn, the first hymnal for choir, in Wittenberg.

Johann Sebastian Bach harmonised hundreds of chorales, typically used at the end of his cantatas and concluding scenes in his Passions. In hisSt Matthew Passion, he set five stanzas of “O Haupt voll Blut und Wunden” in four different ways. He also used hymns as the base for his cycle ofchorale cantatas and chorale preludes. Bach concentrated on the chorales especially in the Chorale cantatas of his second annual cycle, composed mostly in 1724–25.

Today, many of the Lutheran chorales are familiar as hymns used in Protestant churches, sometimes sung in four-voice harmony.

Anton Bruckner make frequent use of the chorale as a compositional device, based on his understanding of musical settings of the liturgy and Johann Sebastian Bach’s chorale preludes. He used it in his symphonies, masses and motets, for example Dir, Herr, dir will ich mich ergeben andIn jener letzten der Nächte, often in contrast to and combination with the fugue, as in Psalm 22 and in the Finale of Symphony No. 5.