There are a variety of human intervention study designs in nutrition research, but the most common, especially in pharmaceutical/medical research, is the clinical trial. A clinical trial is a scientifically controlled study using consenting people to find the safety and effectiveness of different items/regimens. Clinical trials are the “gold standard” research method. Their findings carry the most weight when making decisions about a certain research area because they are the most rigorous scientific studies. Every pharmaceutical must go through a series of clinical trials before being approved for the market by the FDA (specifically the randomized, double-blind, placebo-controlled experiments). As shown in the figure below, human intervention studies/clinical trials are normally prospective. By the end of this section you should have an understanding of what randomized, double-blind, and placebo-controlled means.

Placebo and The Placebo Effect

A placebo is a fake pill or treatment that serves as a comparison to an active treatment. An examples of placebos are shown below. 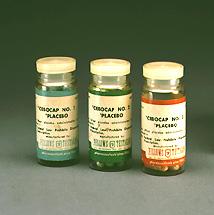 The use of a placebo is necessary in medical research because of a phenomenon known as the “placebo effect”. The placebo effect results from a subject’s belief in a treatment, even though there is actually no treatment being administered. An example would be an athlete who consumes a sports drink and runs the 100 meter dash in 11.00 seconds. The athlete then, under the exact same conditions, drinks what he is told is “Super Duper Sports Drink” and runs the 100 meter dash in 10.50 seconds. But what the athlete didn’t know was that Super Duper Sports Drink was the Sports Drink + Food Coloring. There was nothing different between the drinks, but the athlete believed that the “Super Duper Sports Drink” was going to help him run faster, so he did. This improvement is due to the placebo effect. 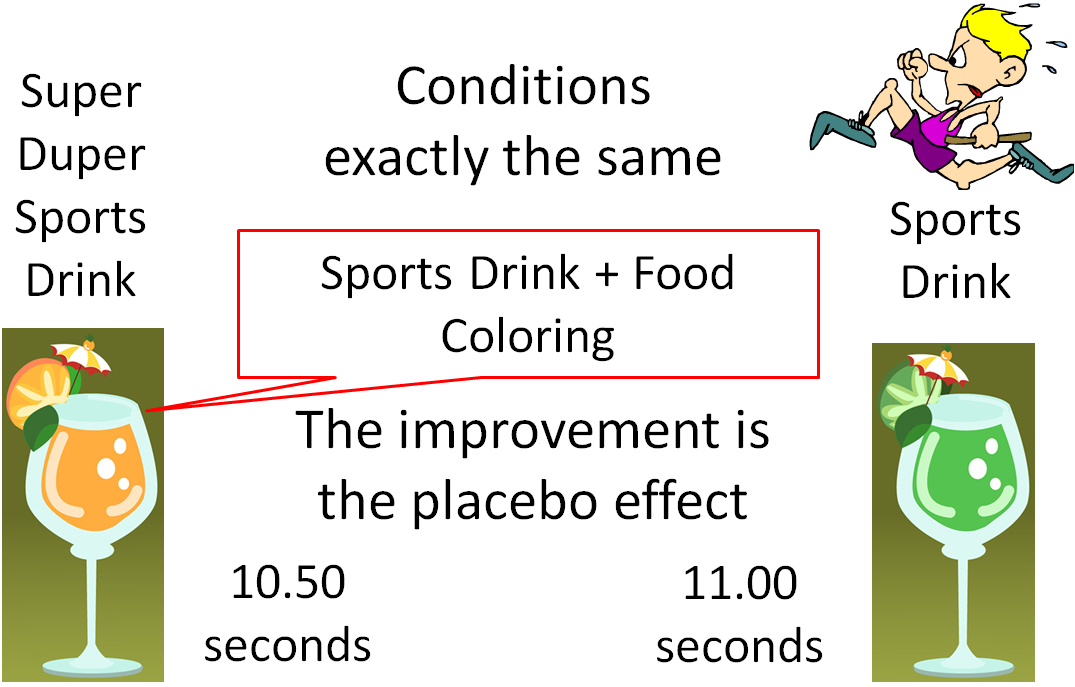 Ironically, a study similar to the example given above has been conducted and its results support that there is a “placebo effect.”

Randomization is the process of randomly assigning subjects to groups to decrease bias. Bias, according to the Merriam-Webster dictionary, is “a systematic error introduced into sampling or testing by selecting or encouraging one outcome or answer over others3“. Bias can occur in assigning subjects to groups in a way that will influence the results. An example of bias in a study of an antidepressant drug is shown below. In this nonrandomized antidepressant drug example, researchers (who know what the subjects are receiving) put depressed subjects into the placebo group, while “less depressed” subjects are put into the antidepressant drug group. As a result, even if the drug isn’t effective, the group assignment may make the drug appear effective, thus biasing the results as shown below. 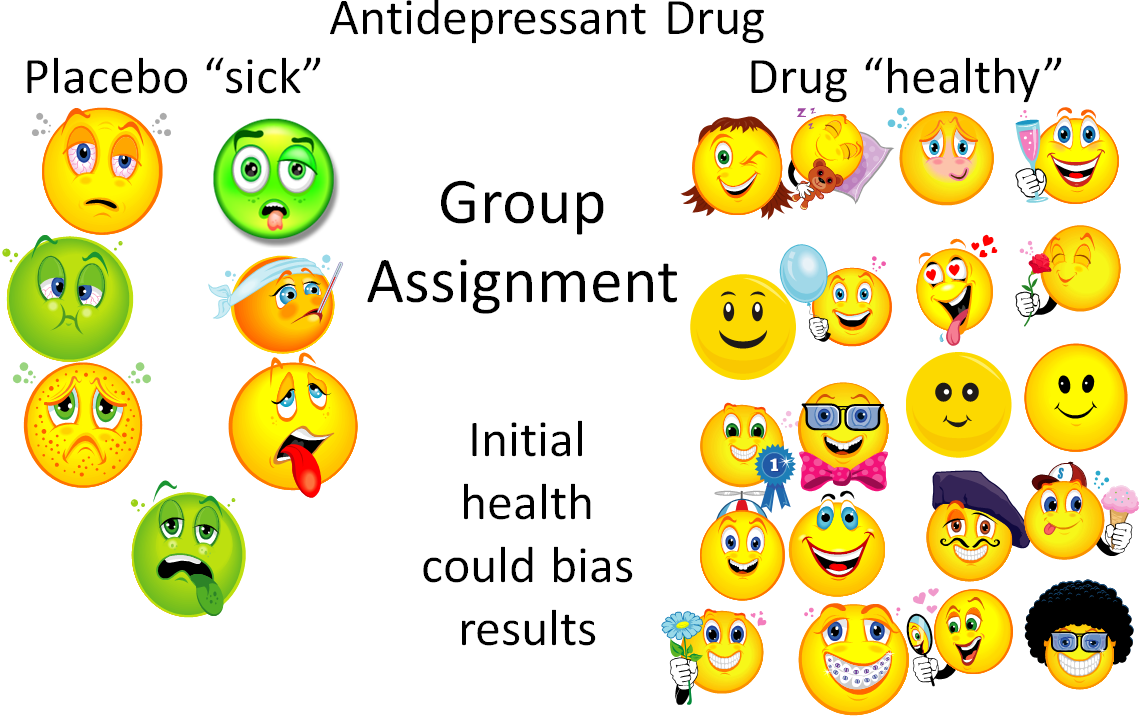 This is a bit of an extreme example, but even if the researchers are trying to prevent bias, sometimes bias can still occur. However, if the subjects are randomized, the sick and the healthy people will ideally be equally distributed between the groups. Thus, the trial will be unbiased and a true test of whether or not the drug is effective. 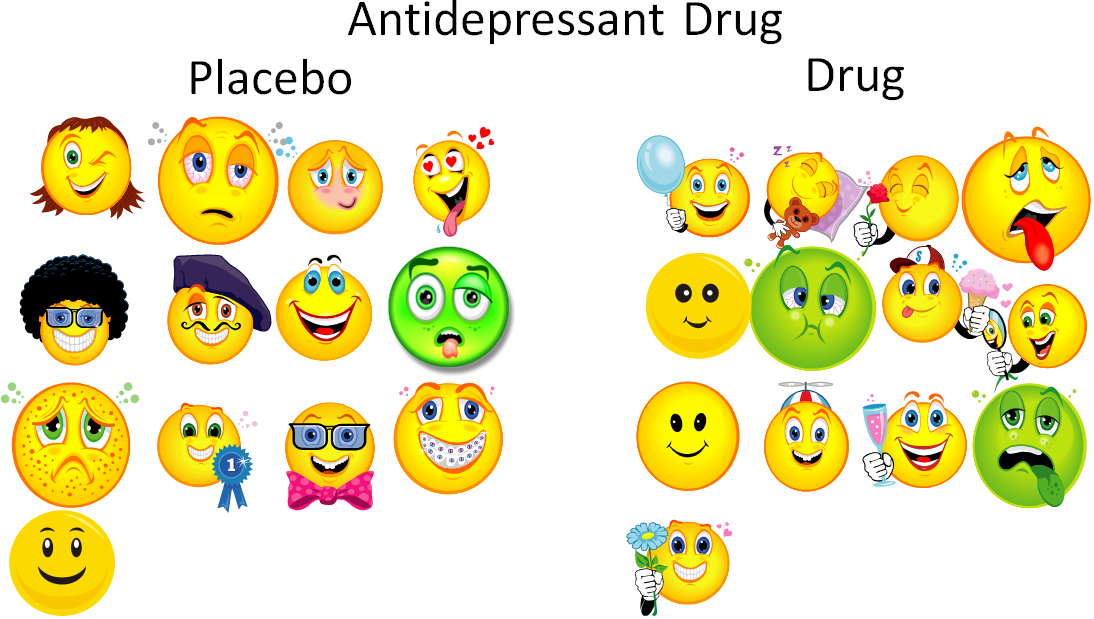 Blinding is a technique to prevent bias in human intervention studies. A study without blinding is referred to as “open label” because both the subject and the researchers know what treatment the subject is receiving (i.e. placebo or drug). This can lead to bias, so these types of trials are used less frequently. 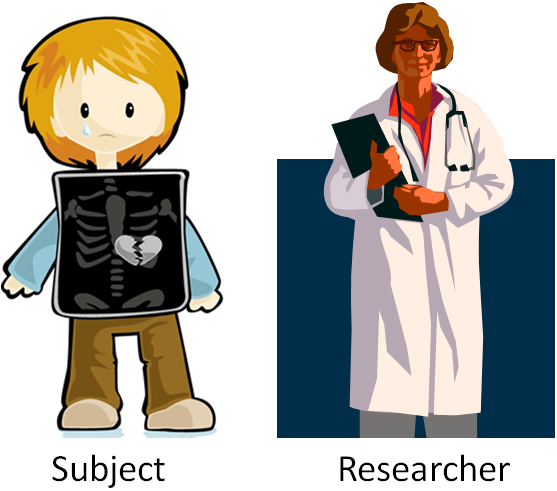 Figure 1.46 In an open-label study, both the subject and researcher know what treatment the subject is receiving. 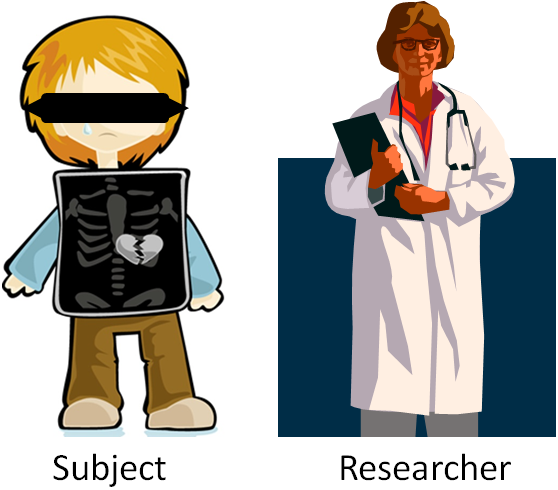 Figure 1.47 In a single-blind study, the researcher knows what treatment the subject is receiving, but the subject does not.

Finally there is the double-blind study, where neither the researcher nor the subject know what treatment the subject is receiving. A separate board reviews the collected results and decides the fate of the trial. This is the “gold standard” because it prevents observer bias from occurring. 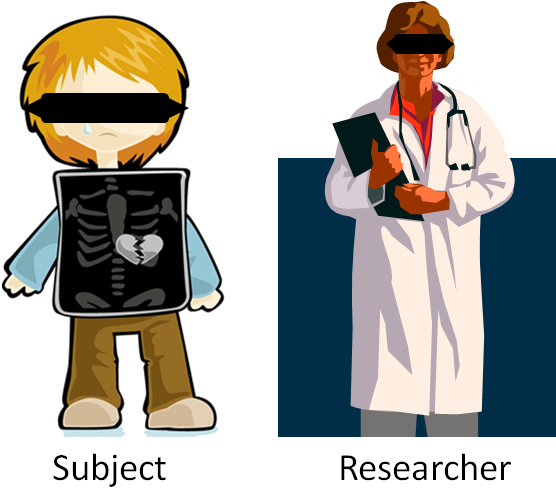 Figure 1.48 In a double-blind study, neither the subject nor the researcher know what treatment the subject is receiving.

The following video does a nice job explaining and illustrating how double-blind randomized trials are performed.