The uptake, absorption, transport, and storage of vitamin A and carotenoids are summarized in the figure below. 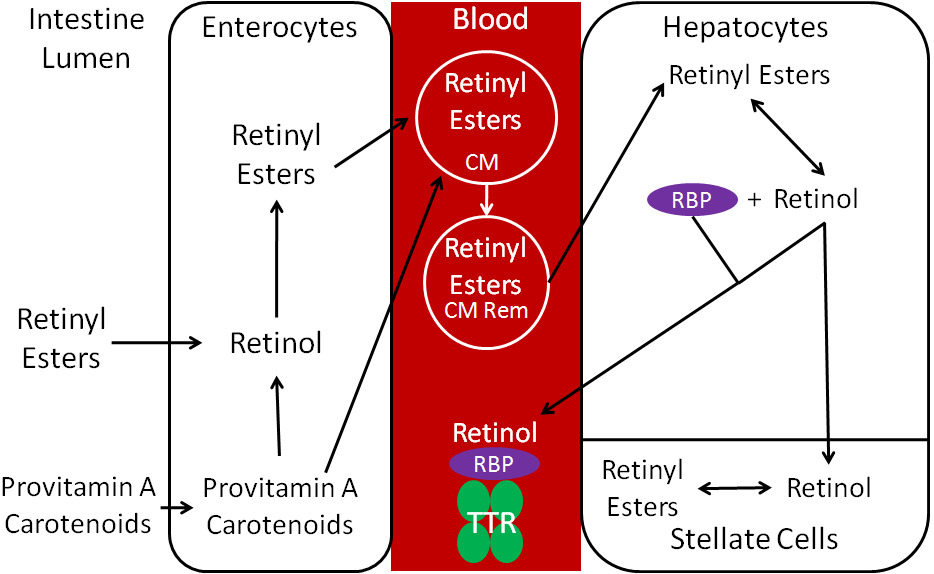 Esters are removed by esterases so that free retinol can be taken up into the enterocyte. Preformed vitamin A is highly bioavailable (70-90%) if consumed with some fat2. Carotenoids have a much lower bioavailability, which varies based on the carotenoid and matrix it is in when consumed. Once provitamin A carotenoids are taken up into the enterocytes, they are: (1) cleaved to retinal and then converted to retinol or (2) absorbed intact and incorporated into chylomicrons.

The liver is the major storage site of vitamin A. For storage, the retinol will be transported from the hepatocytes to the stellate cells and converted back to retinyl esters, the storage form of vitamin A. If vitamin A is needed to be released into circulation, retinol will combine with retinol binding protein (RBP). Retinol + RBP are then bound to a large transport protein, transthyretin (TTR). It is believed that retinol + RBP would be filtered out by the kidney and excreted in urine if it was not bound to TTR1.

After it is further metabolized, 60% of vitamin A is excreted in the urine, 40% in feces2.