2 Small amount are released from liver, bone, and spleen – proportional to body stores

The most common measures of iron status are hemoglobin concentrations and hematocrit (described below) levels. A decreased amount of either measure indicates iron deficiency, but these two measures are among the last to indicate that iron status is depressed. This is because, as you can see in the figure above, circulating iron (plasma iron) levels are not altered until you reach iron deficiency. Thus, other measures are likely better choices1.

The hematocrit, as illustrated in the figure below, is a measure of the proportion of red blood cells (erythrocytes) as compared to all other components of blood. The components are separated by a centrifuge. The red blood cells remain at the bottom of the tube. They can be quantified by measuring the packed cell volume (PCV) relative to the total whole blood volume. 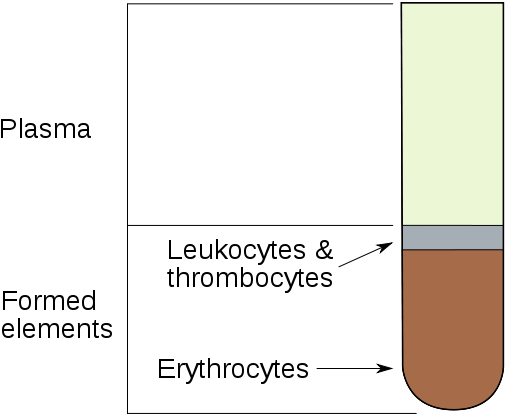 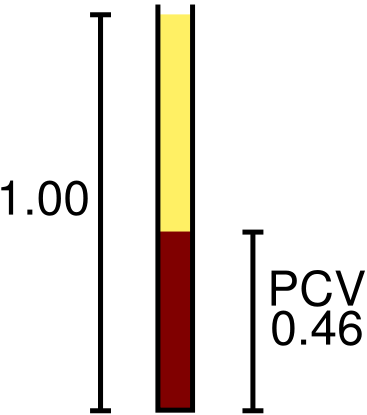 One of the best measures of iron status is bone marrow iron, but this is an invasive measure,  and is therefore not commonly used. Plasma ferritin, the iron storage protein, is also found in lower amounts in the blood (plasma) and is a good indicator of iron stores. Thus, it is a sensitive measure to determine if someone is in negative iron balance or iron depleted. It is not as useful of a measure beyond this stage because the iron stores have been exhausted for the most part. Transferrin iron binding capacity (aka total iron binding capacity), as it sounds, is a measure of how much iron transferrin can bind. An increase in transferrin iron binding capacity indicates deficiency (>400 indicates deficiency). But the best measure for deficiency or anemia is either percent serum transferrin saturation or plasma iron. A lower % saturation means that less of the transferrin are saturated or carrying the maximum amount of iron that they can handle. Plasma iron is easily understood as the amount of iron within the plasma1.

Iron deficiency is the most common deficiency worldwide, estimated to affect 1.6 billion people. In the US, it is less common, but an estimated 10% of toddlers and women of childbearing age are deficient. Iron deficiency often results in a microcytic (small cell), hypochromic (low color) anemia, that is a result of decreased hemoglobin production. With decreased hemoglobin, the red blood cells cannot carry as much oxygen. Decreased oxygen leads to slower metabolism. Thus, a person with this anemia feels fatigued, weak, apathetic, and can experience headaches6. Other side effects include decreased immune function and delayed cognitive development in children7.

Those who are particularly at risk are1,7:

Women of childbearing age – because of losses due to menstruation

Vegetarians – because they do not consume heme iron sources

To give you a better understanding of these risks, it is helpful to look at how much higher the RDAs are for women of reproductive age and pregnant women compared to men8.

To put this in perspective, 3 oz of beef contains ~3 mg of iron. Thus, it can be a challenge for some women to meet the requirement. The RDA committee estimates the iron requirements to be 80% and 70% higher for vegans and endurance athletes, respectively. The increased requirement for endurance athletes is based on loss due to “foot strike hemolysis”, or the increased rupture of red blood cells due to the striking of the foot on hard surfaces3.

Iron toxicity is rare in adults, but can occur in children who consume too many supplements containing iron. Symptoms of this acute toxicity include nausea, vomiting, and diarrhea7.

50 out of 10,000 newborns in the United States are born with the genetic condition, hemochromatosis. In this condition, there is a mutation in a protein in the enterocyte that prevents the normal decrease of intestinal iron absorption. Without this protein these individuals cannot decrease iron absorption. Since the body cannot excrete iron, it accumulates in tissues, and ultimately can result in organ failure1.