1 out of every 133 people in the United States has celiac disease1. People with celiac disease cannot consume the protein gluten because it causes their body to generate an autoimmune response (immune cells attack the body’s own cells) that causes damage to the villi in the intestine, as shown below.

This damage to the villi impairs the absorption of macronutrients and micronutrients from food.

There are a variety of symptoms for celiac disease that vary depending on age and from person to person. For a listing of all symptoms, see the first link below. The second link describes the difficulty in diagnosing this disease, which is reinforced by the the third video link.

Gluten is a protein that is bound to starch in the endosperm of grains such as: 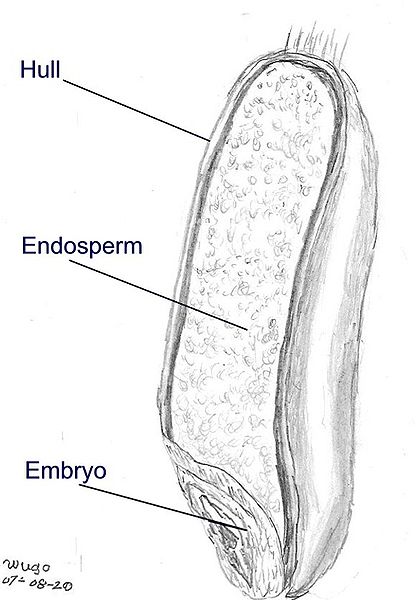 Figure 5.51 Parts of a wheat granule3

The video below does a nice job of providing some more information about this disease.

Gluten-free diets have been increasing in popularity even for people who don’t have celiac disease. The thinking among those consuming these diets is that they might be gluten-sensitive, meaning that they experience adverse effects from consuming it. However, as the following videos describes, there is not much evidence to support people being gluten-sensitive.

What are the symptoms of celiac disease? – http://digestive.niddk.nih.gov/ddiseases/pubs/celiac/#symptoms

The gluten-free diet: some examples – http://digestive.niddk.nih.gov/ddiseases/pubs/celiac/#symptoms