4.2 Sociological Influences of the Four Curricula

There are four different types of curricula that educators have to address in the classroom; these four are the explicit, implicit, null, and extracurricular. The most obvious curriculum in the classroom is the explicit curriculum because that is the curriculum that has been approved by the New York State Board of Regents. Curriculum of extracurricular activities also exists for such activities as academic clubs, band and chorus, or sports. The curriculum that is not so obvious is the implicit or “hidden curriculum” and the null curriculum, which is information that students may never be exposed to because they are excluded from the explicit curriculum. Each of these curricula will be explained below with examples to illustrate what each entail. 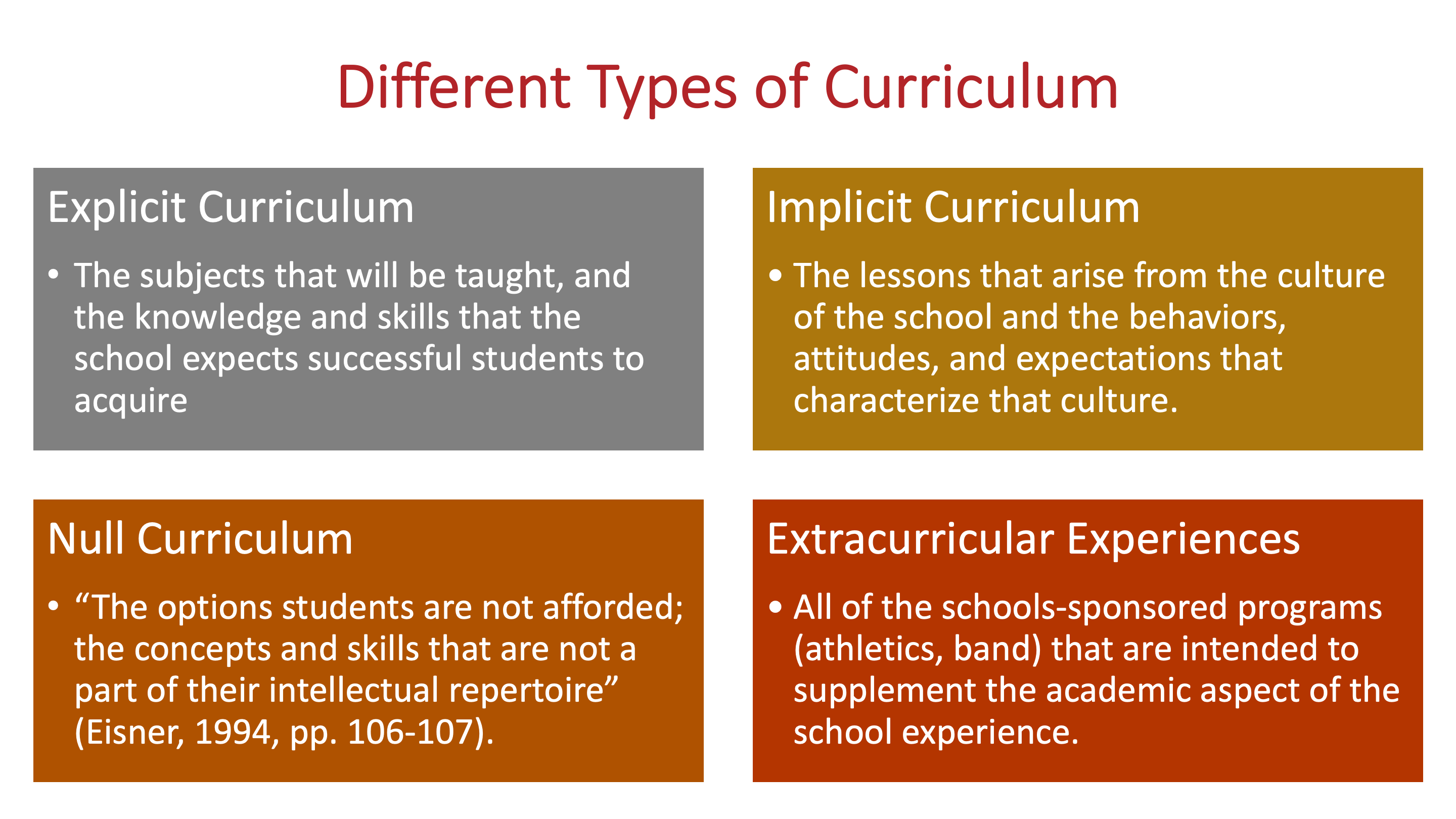 Explicit instruction can be described as being a curriculum that has been intentionally designed, field tested by educators, and disseminated publicly, often with resources that will help teachers facilitate classroom instruction. To illustrate this point, one could look at the current modules that were created to offer guidance on how to deliver instruction to students and provide curriculum maps, graphic organizers, and supplemental materials that could be used to deliver the prescribed curriculum.

Module 1 in the 5th Grade ELA curriculum uses excerpts from the Universal Declaration of Human Rights (UDHR) and Esperanza Rising as the central texts focused on in the module. The curriculum map also provides several supplemental resources that are used to offer context to the central texts, such as a history of the United Nations, to understand how the UDHR was created and for what purpose. The module maps out suggested pacing, or benchmarks in the modules. Continuing with the 5th grade New York State ELA module 1 example, teachers are encouraged to give students the vocabulary that will be used in the module to clarify the goals of the module. The 5th grade ELA Module 1 example suggested that teachers assess the vocabulary they need for the module using short constructed or selected response questions. The students would then read supplemental human rights accounts that are meant to be scaffolds that lead up to the novel Esperanza Rising, in which students will be asked to use extended responses with textual evidence from the novel to explain how Esperanza changed over time.

Eisner (1985) defined null curriculum as information that schools do not teach:

… the options students are not afforded, the perspectives they may never know about, much less be able to use, the concepts and skills that are not part of their intellectual repertoire (Eisner,1985, p. 107).

There are several examples of null curriculum that can be identified in content areas. For example, in social studies, the teacher may give a general overview of the history of science while covering the scientific revolution. However, this information is excluded from the formal curriculum. Another example would be the exclusion of Darwin’s theory of evolution from the official biology curriculum. Null content may represent specific facts omitted in a particular unit of study. An example of this would be a social studies unit focusing on the New Deal may not reference the fact that the New Deal failed to resolve the problem of unemployment.

Extra-curricular curriculum includes school-sponsored opportunities that fall outside of academic requirements prescribed on the local and state levels. Examples of extra-curricular activities include participation in sports, music, student governance, yearbook, school newspaper, and academic clubs. Extracurricular participation is a strategy to promote school connectedness (Centers for Disease Control and Prevention, 2009). Extracurricular activities are often associated with many positive outcomes such as higher academic achievement and decreased school dropout (Farb & Matjasko, 2012).

According to the United States National Center for Education Statistics (2012), sports are the most common type of extracurricular activity among secondary school students, with 44% of high school seniors reporting participation in some type of sport. Additionally, 21% of students participate in music activities, as well as clubs, such as academic (21%), hobby (12%), and vocational clubs (16%).