The headlines on October 4, 1957 revealed that the Soviet Union had successfully launched Sputnik 1, the first man-made satellite. This event single-handedly launched America into a decades long endeavor to not only compete in the space program, but to evaluate and launch a new and purportedly improved educational system that would afford its students a curriculum of rigor, especially in the realms of mathematics and science. It would, presumably, prepare U.S. students to compete with  other nations.

This event also marked a pivotal reversal of progressive educational philosophy that prevailed during the 1950’s.  Some proponents of a more rigorous curricula contended that U.S. education was “soft,” that they relied too heavily on vocational training, and that teachers were not trained effectively. (Watters, 2015)

Life, a weekly magazine at the time, known for its general interest stories and quality photographs ran a five-part essay entitled The Crisis in U.S. Education.”  The cover photo was intended to juxtapose the seriousness of the Soviet student with the carefree image of the U.S. student. Inside articles contrasted the former as a student of physics and chemistry with the latter who jokingly referred to his inability to solve simple geography problems.

Critics of the U.S. educational system included Arthur Bester (Educational Wastelands 1953 and Restoration of Learning 1956). Bestor, professor of history at the University of Illinois wrote a Life magazine article, “What Went Wrong with US Schools?”  He made sharp comparisons to schools and the Sputnik satellite; contending that US students were simply not prepared. (Bestor, 1953) 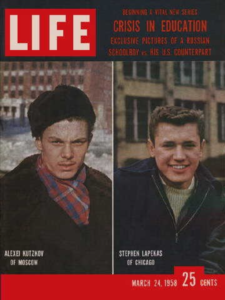 These series of events set the stage for the educational reform measures of the next decades; a period marked by the need for rigor, accountability and competitive edge within the global sphere.

Nearly two decades later, the historic report, A Nation at Risk (April 1983), would catapult a nation toward an increased urgency for rigor and competency. As the framers stated:

In an age of accountability and data driven curriculum, policy makers have supported standardized and other testing measures; however, some organizations have highlighted the importance of a balance between teaching and testing. The “Learning Is More Than a Test Score” campaign has brought to light the curricula omissions in favor of increased time for testing and preparation of testing [1]  Studies reveal that students spend 20 to 50 hours each year taking tests while those in heavily tested grades spend 60 to more than 110 hours per year. These figures translate to additional pupil expenditures of $700 to at time, more than $1,000 per year and account for 20 to 40 minutes of lost instructional time each day (see footnote 1).

The debate continues about the loss of academic time and dollars spent in relation to the benefits of test preparation.