The New York State Commissioner of Education, who is the chief executive officer of the Board of Regents, is elected by the Board of Regents. The commissioner is responsible for enforcement of educational laws, compliance to educational policies, and general supervision of schools. The New York State Governor is advised by a cabinet member about education. The governor creates a budget, a part of which pertains to state aid to public schools. Other responsibilities of the governor are to appoint commissions and to create programs. An example of is the 2013 Reform Commission that investigated and made recommendations about full day pre-K, awards for high performing teachers, and early college high school programs. The NYS Senate and House pass educational laws and appoint the Regents.

The 10th Amendment gives states control over education that limits the role of the federal government in education. The Secretary of Education is a cabinet position appointed by the President of the United States and confirmed by the Senate. The responsibility of the secretary of education is to ensure all schools are abiding by the federal policies and laws pertaining to education. Both the House and Senate have education committees to review educational policies and proposed laws. Adoption of federal policies were influenced by funding in the past, but a new law has drastically limited this practice. An example was Race to the Top as an incentive for adopting the CCSS under the Obama administration.

The Every Student Succeeds Act (ESSA) recently replaced No Child Left Behind (2002) and represents a reauthorization of the Elementary and Secondary Education Act (ESEA), originally authorized in 1965 as the federal legislation that guides public education in the United States. In response to state feedback under NCLB, ESSA provides states the flexibility to develop programs that meet the needs of individual states. An important component to ESSA is the inclusion of a measure of equity and access to education for all students including disadvantaged and high needs students.

As a teacher it is your responsibility to become familiar with your school’s organizational structure, policies, procedures and culture. Understanding how your school is governed and establishing good communication with your superintendent, principal and colleagues will ensure you are meeting the expectations of the district. We will discuss several layers of local governance including the Board of Education, Superintendent and other district and building-level personnel that ensure a school is complying with the multitude of policies and laws of the state and Federal Government. 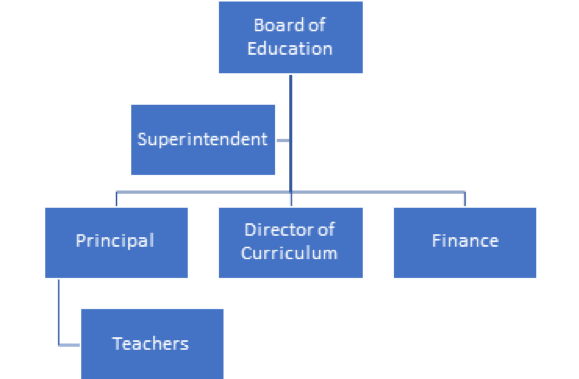 Local Board of Education

As a teacher your work is primarily influenced by the local arm of school governance, the Board of Education. In New York State all public schools have a Board of Education (BOE). The board’s powers and duties are derived from the state constitution, the laws of New York State and the regulations or rulings of the New York State Commissioner of Education. The Board of Education is a group of locally elected officials who serve as volunteers and have several important responsibilities, most notably to establish district policies, develop an annual budget for public approval, approve or disapprove of the superintendent’s recommendations on personnel matters and contracts, and to evaluate the superintendent.  Board members typically serve in two, three or four-year terms. The size of the BOE varies but must include an odd number of members for voting purposes (5, 7,9).

Meetings of the BOE are held in public and the meeting minutes and proceedings are public information except for matters of personnel which are confidential. Anyone who is an adult may serve as a member of the BOE. There is no educational requirement to serve as a member of the BOE. Community members choose to run for this position for a variety of reasons. Some members are parents, grandparents, business owners and concerned citizens. The local BOE often reflects many of the values, customs and culture of a school district. As a new, or veteran, teacher you should plan to attend some of the BOE meetings to gain a better sense of the community that you work in and the people who determine educational policy in your district. Be sure to review policies and procedures.

The superintendent of schools is selected by the Board of Education and is the chief executive officer of the district. As such, the superintendent is responsible for the day-to-day operation of the district and administration of board policies, programs and plans for board action.  Superintendents are hired and serve for a term period, usually four years. Superintendents are not eligible to earn tenure like teachers and principals. A superintendent works with a team of administrators to ensure the educational and safety needs of students are met. Typically, they will supervise school business officials, various principals and curriculum leaders and other members of the school management team (buildings and grounds, transportation director, etc.). The superintendent, as school leader, should be a very visible and influential member of the school community. The superintendent’s vision, philosophy and values all contribute to decisions that create school climate and culture.

Many students come to teaching from a variety of backgrounds and experiences in schools. School settings are as diverse as are people. Schools operate in rural, suburban and urban areas. Schools range from multi-building districts to PK-12 one-building schools with 100 students. Considering this level of diversity each school may or may not have the resources to support district and building level personnel.  A familiar hierarchy in schools might be the Superintendent, Principal, Assistant Principal, Director of Curriculum, the Business office and teachers. See Figure 1.1.