There are many different ways to teach, varying circumstances to take into account, and philosophies to apply to each classroom. And what better way to have a positive impact on the world than to offer knowledge for consumption? The term ‘teacher’ can be applied to anyone who imparts knowledge of any topic, but it is generally more focused on those who are hired to do so (teach, n.d., n.p.). In imparting knowledge to our students, it is inevitable that we must consider our own personal philosophies, or pedagogies, and determine not only how we decide what our philosophies are, but also how those impact our consumers.

Horace Mann, from Report of the Massachusetts Board of Education (1848) 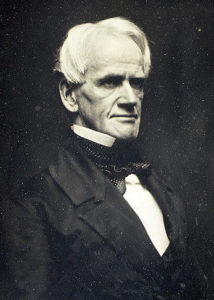 Horace Mann (May 4, 1796 – August 2, 1859) was an American educational reformer known for his commitment to promoting public education.

Without undervaluing any other human agency, it may be safely affirmed that the common school, improved and energized as it can easily be, may become the most effective and benignant of all the forces of civilization. Two reasons sustain this position. In the first place, there is an universality in its operation, which can be affirmed of no other institution whatever. If administered in the spirit of justice and conciliation, all the rising generation may be brought within the circle of its reformatory and elevating influences. And, in the second place, the materials upon which it operates are so pliant and ductile as to be susceptible of assuming a greater variety of forms than any other earthly work of the Creator. . . .

According to the European theory, men are divided into classes-some to toil and earn, others to seize and enjoy. According to the Massachusetts theory, all are to have an equal chance for earning, and equal security in the enjoyment of what they earn. A republican form of government, without intelligence in the people, must be, on a vast scale, what a mad-house without superintendent or keepers would be on a small one. . . . However elevated the moral character of a constituency may be, however, well-informed in matters of general science or history, yet they must, if citizens of a republic, understand something of the true nature and functions of the government under which they live. . . .

The establishment of a republican government, without well-appointed and efficient means for the universal education of the people, is the most rash and foolhardy experiment ever tried by man. . . . It may be an easy thing to make a republic, but it a very laborious thing to make republicans; and woe to the republic that rests upon no better foundations than ignorance, selfishness, and passion! . . .

Such, then, . . . is the Massachusetts system of common schools. Reverently it recognizes and affirms the sovereign rights of the Creator, sedulously and sacredly it guards the religious rights of the creature. . . . In a social and political sense, it is a free school system. It knows no distinction of rich and poor, of bond and free, or between those, who, in the imperfect light of this world, are seeking, through different avenues, to reach the gate of heaven. Without money and without price, it throws open its doors, and spreads the table of its bounty, for all the children of the State. Like the sun, it shines not only upon the good, but upon the evil, that they may become good; and, like the rain, its blessings descend not only upon the just, but upon the unjust, that their injustice may depart from them, and be know no more.

In order to develop a teaching philosophy, a teacher should examine and continuously reflect on the following: