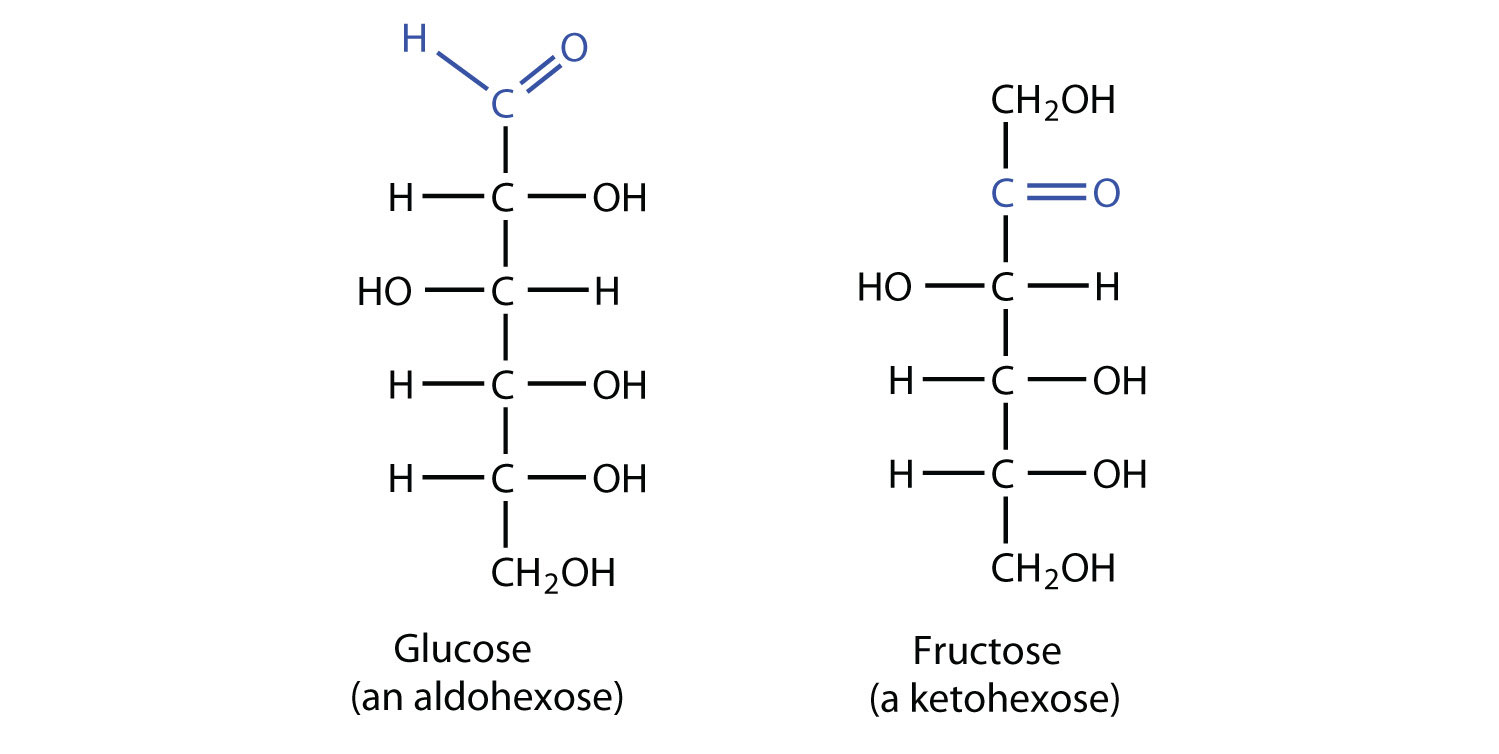 Draw an example of each type of compound.

Draw an example of each type of compound.

The simplest sugars are the trioses. The possible trioses are shown in part (a) of Figure 16.2 “Structures of the Trioses”; glyceraldehyde is an aldotriose, while dihydroxyacetone is a ketotriose. Notice that two structures are shown for glyceraldehyde. These structures are stereoisomers, isomers having the same structural formula but differing in the arrangement of atoms or groups of atoms in three-dimensional space. If you make models of the two stereoisomers of glyceraldehyde, you will find that you cannot place one model on top of the other and have each functional group point in the same direction. However, if you place one of the models in front of a mirror, the image in the mirror will be identical to the second stereoisomer in part (b) of Figure 16.2 “Structures of the Trioses”. Molecules that are nonsuperimposable (nonidentical) mirror images of each other are a type of stereoisomer called enantiomers (Greek enantios, meaning “opposite”).

Cis-trans (geometric) isomers were discussed in Chapter 13 “Unsaturated and Aromatic Hydrocarbons”, Section 13.2 “Cis-Trans Isomers (Geometric Isomers)”. These are another type of stereoisomers. 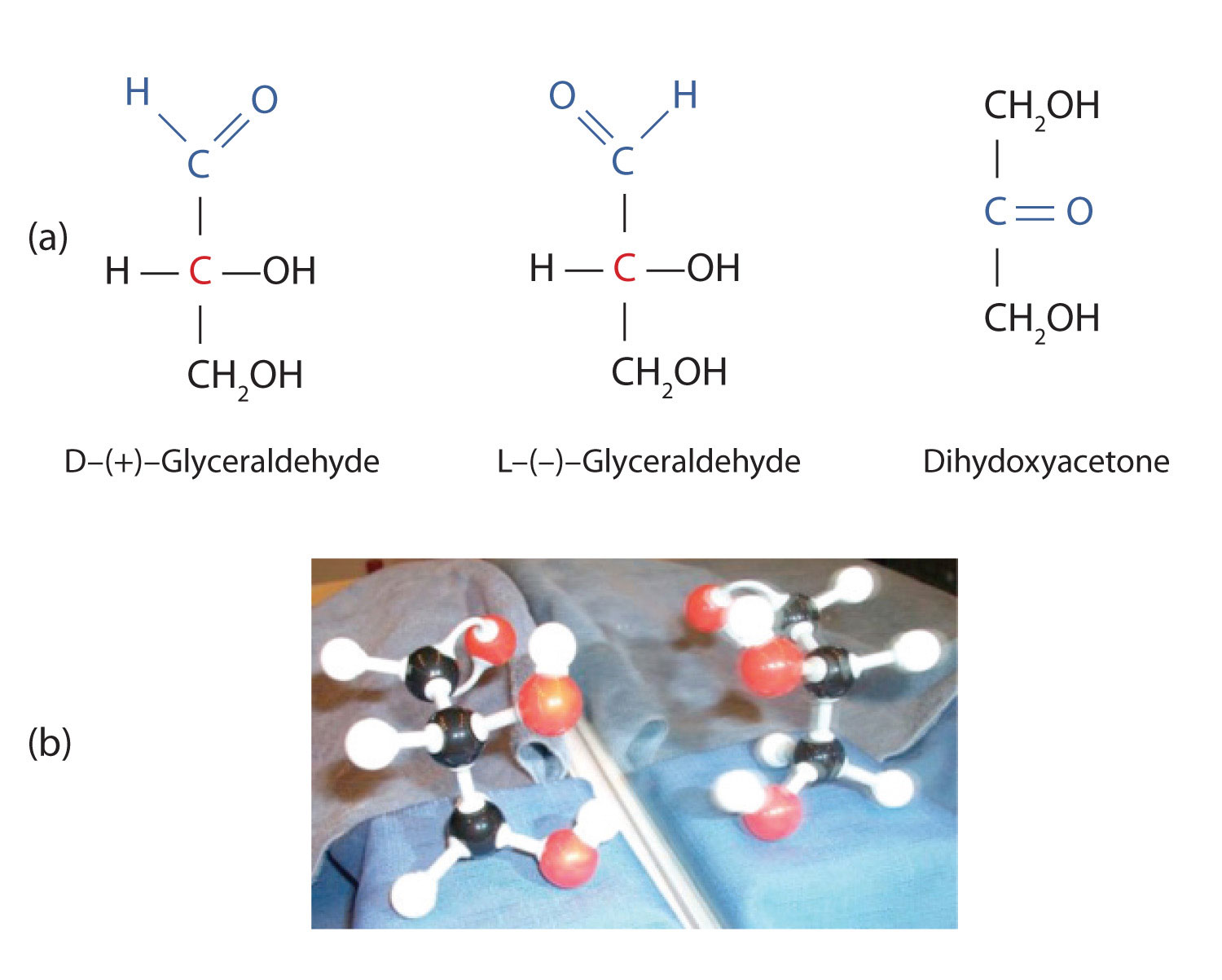 Figure 16.2 Structures of the Trioses.(a) D- and L-glyceraldehyde are mirror images of each other and represent a pair of enantiomers. (b) A ball-and-stick model of D-glyceraldehyde is reflected in a mirror. Note that the reflection has the same structure as L-glyceraldehyde.

H. Emil Fischer, a German chemist, developed the convention commonly used for writing two-dimensional representations of the monosaccharides, such as those in part (a) of Figure 16.2 “Structures of the Trioses”. In these structural formulas, the aldehyde group is written at the top, and the hydrogen atoms and OH groups that are attached to each chiral carbon are written to the right or left. (If the monosaccharide is a ketose, the ketone functional group is the second carbon atom.) Vertical lines represent bonds pointing away from you, while horizontal lines represent bonds coming toward you. The formulas of chiral molecules represented in this manner are referred to as Fischer projections.

By convention, the penultimate (next-to-last) carbon atom has been chosen as the carbon atom that determines if a sugar is D or L. It is the chiral carbon farthest from the aldehyde or ketone functional group.

A beam of ordinary light can be pictured as a bundle of waves; some move up and down, some sideways, and others at all other conceivable angles. When a beam of light has been polarized, however, the waves in the bundle all vibrate in a single plane. Light altered in this way is called plane-polarized light. Much of what chemists know about stereoisomers comes from studying the effects they have on plane-polarized light. In this illustration, the light on the left is not polarized, while that on the right is polarized.

Certain substances act on polarized light by rotating the plane of vibration. Such substances are said to be optically active. The extent of optical activity is measured by a polarimeter, an instrument that contains two polarizing lenses separated by a sample tube, as shown in the accompanying figure. With the sample tube empty, maximum light reaches the observer’s eye when the two lenses are aligned so that both pass light vibrating in the same plane. When an optically active substance is placed in the sample tube, that substance rotates the plane of polarization of the light passing through it, so that the polarized light emerging from the sample tube is vibrating in a different direction than when it entered the tube. To see the maximum amount of light when the sample is in place, the observer must rotate one lens to accommodate the change in the plane of polarization. 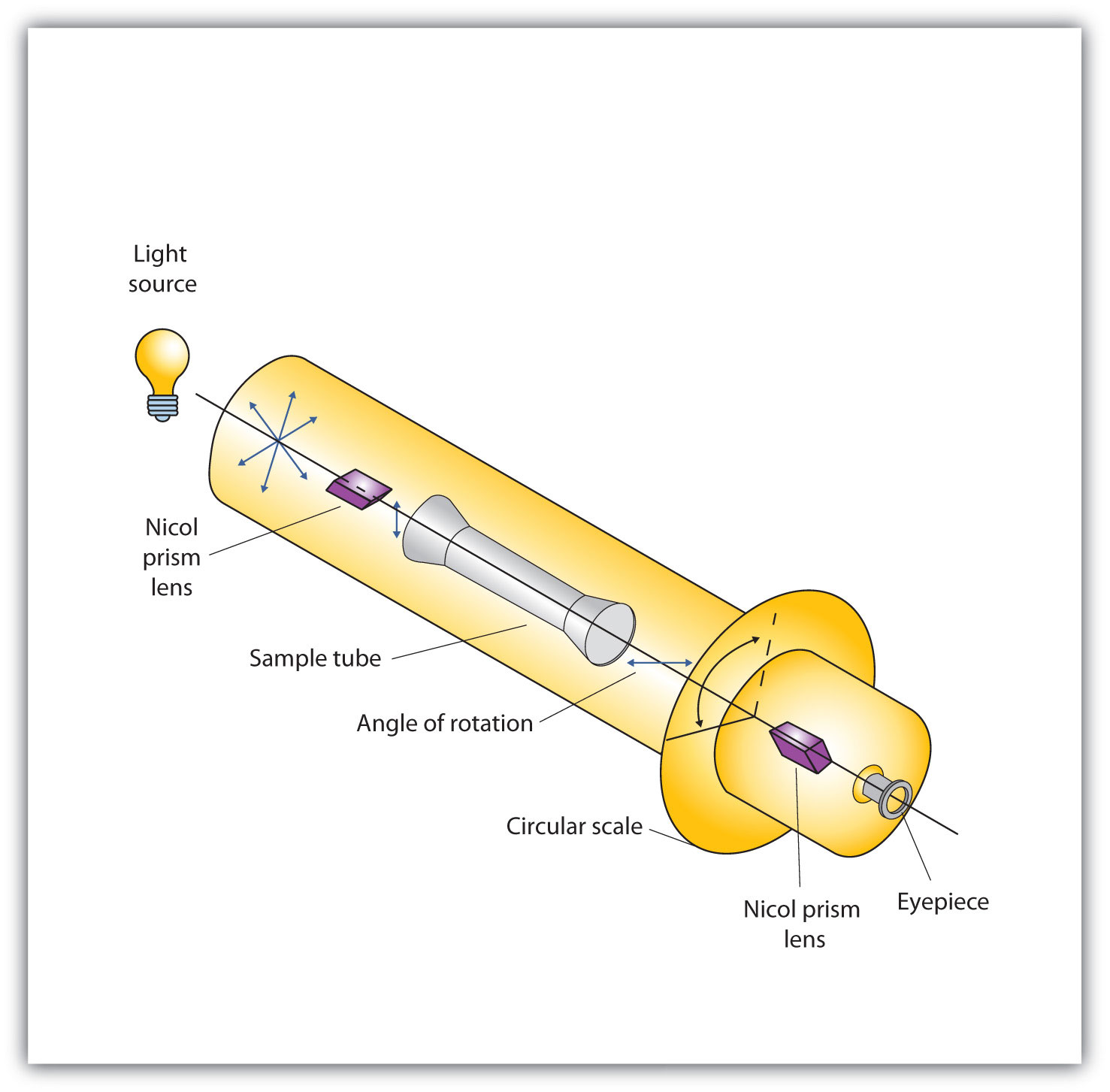 Figure 16.3 Diagram of a Polarimeter

1. A chiral carbon is a carbon atom with four different groups attached to it.

2. Enantiomers are mirror images of each other; they differ in the arrangements of atoms around a chiral carbon.