So far we have represented monosaccharides as linear molecules, but many of them also adopt cyclic structures. This conversion occurs because of the ability of aldehydes and ketones to react with alcohols:

In some cases, OH and carbonyl groups on the same molecule are able to react with one another in an intramolecular reaction. Thus, monosaccharides larger than tetroses exist mainly as cyclic compounds (Figure 16.5 “Cyclization of D-Glucose”). You might wonder why the aldehyde reacts with the OH group on the fifth carbon atom rather than the OH group on the second carbon atom next to it. Recall from Chapter 12 “Organic Chemistry: Alkanes and Halogenated Hydrocarbons”, Section 12.9 “Cycloalkanes”, that cyclic alkanes containing five or six carbon atoms in the ring are the most stable. The same is true for monosaccharides that form cyclic structures: rings consisting of five or six carbon atoms are the most stable. 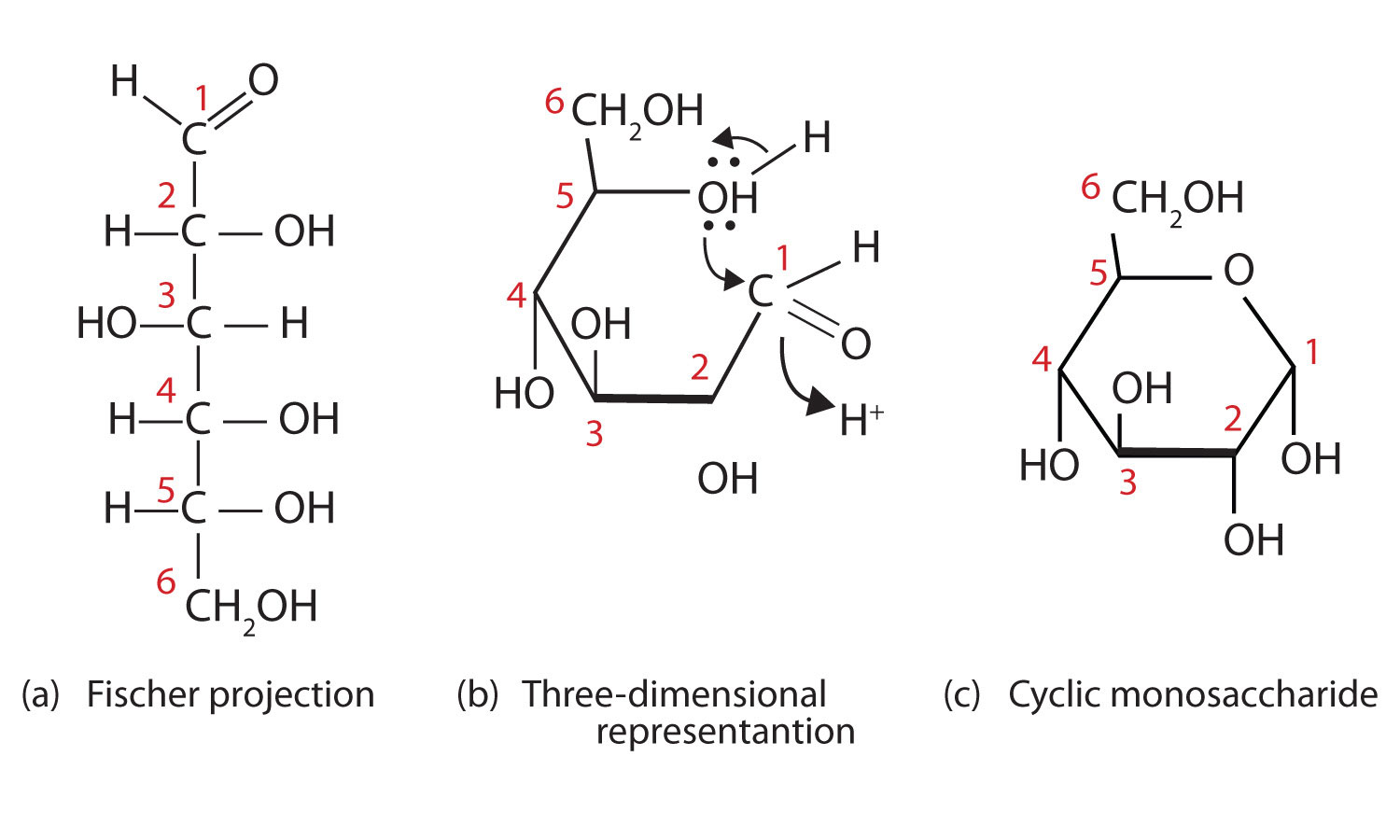 Figure 16.5 Cyclization of D-Glucose. D-Glucose can be represented with a Fischer projection (a) or three dimensionally (b). By reacting the OH group on the fifth carbon atom with the aldehyde group, the cyclic monosaccharide (c) is produced.

When a straight-chain monosaccharide, such as any of the structures shown in Figure 16.4 “Structures of Three Important Hexoses”, forms a cyclic structure, the carbonyl oxygen atom may be pushed either up or down, giving rise to two stereoisomers, as shown in Figure 16.6 “Monosaccharides”. The structure shown on the left side of Figure 16.6 “Monosaccharides”, with the OH group on the first carbon atom projected downward, represent what is called the alpha (α) form. The structures on the right side, with the OH group on the first carbon atom pointed upward, is the beta (β) form. These two stereoisomers of a cyclic monosaccharide are known as anomers; they differ in structure around the anomeric carbon—that is, the carbon atom that was the carbonyl carbon atom in the straight-chain form. 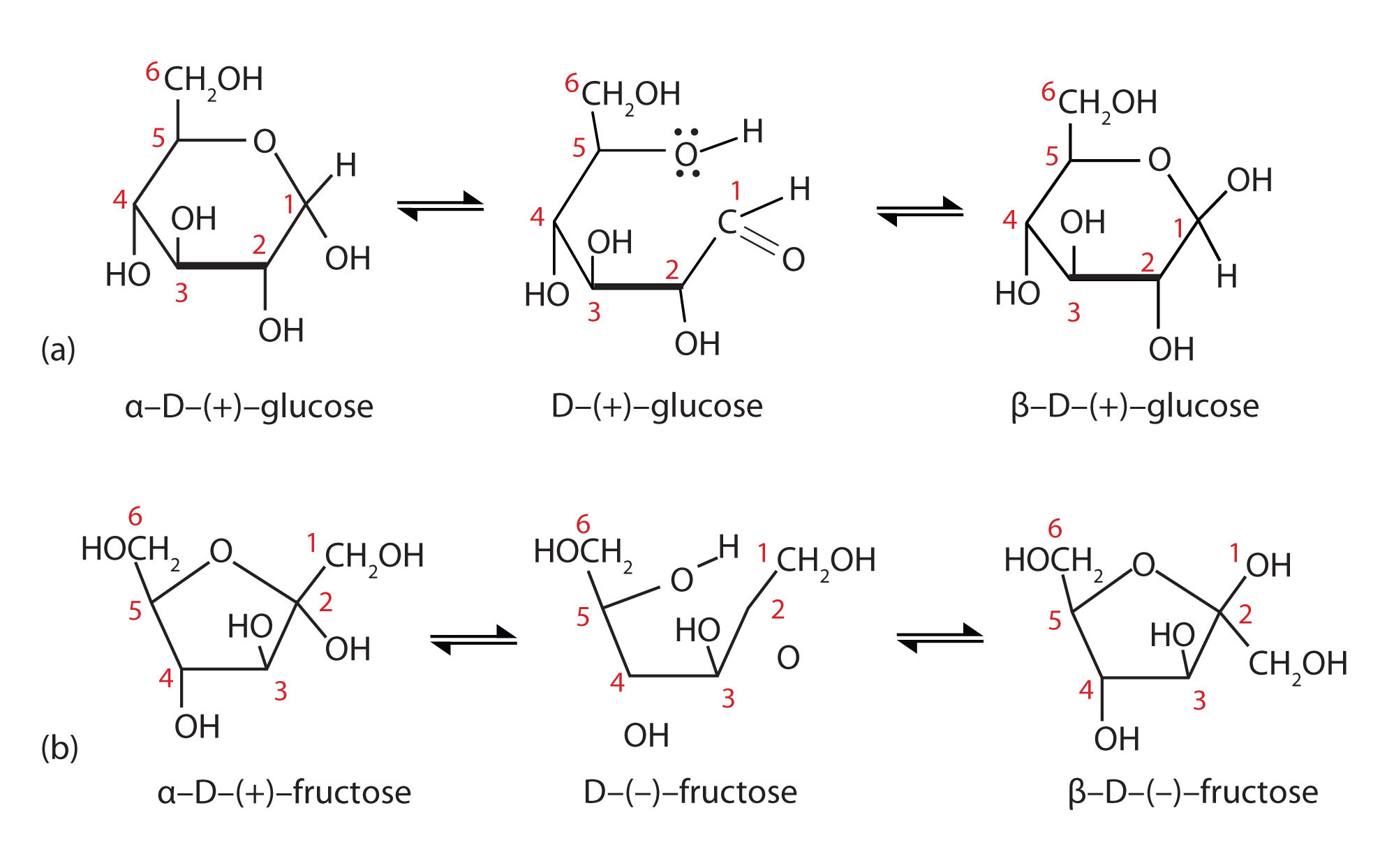 Figure 16.6 Monosaccharides. In an aqueous solution, monosaccharides exist as an equilibrium mixture of three forms. The interconversion between the forms is known as mutarotation, which is shown for D-glucose (a) and D-fructose (b).

It is possible to obtain a sample of crystalline glucose in which all the molecules have the α structure or all have the β structure. The α form melts at 146°C and has a specific rotation of +112°, while the β form melts at 150°C and has a specific rotation of +18.7°. When the sample is dissolved in water, however, a mixture is soon produced containing both anomers as well as the straight-chain form, in dynamic equilibrium (part (a) of Figure 16.6 “Monosaccharides”). You can start with a pure crystalline sample of glucose consisting entirely of either anomer, but as soon as the molecules dissolve in water, they open to form the carbonyl group and then reclose to form either the α or the β anomer. The opening and closing repeats continuously in an ongoing interconversion between anomeric forms and is referred to as mutarotation (Latin mutare, meaning “to change”). At equilibrium, the mixture consists of about 36% α-D-glucose, 64% β-D-glucose, and less than 0.02% of the open-chain aldehyde form. The observed rotation of this solution is +52.7°.

Even though only a small percentage of the molecules are in the open-chain aldehyde form at any time, the solution will nevertheless exhibit the characteristic reactions of an aldehyde. As the small amount of free aldehyde is used up in a reaction, there is a shift in the equilibrium to yield more aldehyde. Thus, all the molecules may eventually react, even though very little free aldehyde is present at a time.

In Figure 16.5 “Cyclization of D-Glucose” and Figure 16.6 “Monosaccharides”, and elsewhere in this book, the cyclic forms of sugars are depicted using a convention first suggested by Walter N. Haworth, an English chemist. The molecules are drawn as planar hexagons with a darkened edge representing the side facing toward the viewer. The structure is simplified to show only the functional groups attached to the carbon atoms. Any group written to the right in a Fischer projection appears below the plane of the ring in a Haworth projection, and any group written to the left in a Fischer projection appears above the plane in a Haworth projection.

The difference between the α and the β forms of sugars may seem trivial, but such structural differences are often crucial in biochemical reactions. This explains why we can get energy from the starch in potatoes and other plants but not from cellulose, even though both starch and cellulose are polysaccharides composed of glucose molecules linked together. We will examine the effects of these differences more closely in Section 16.7 “Polysaccharides” and when we discuss enzyme specificity in Chapter 18 “Amino Acids, Proteins, and Enzymes”, Section 18.5 “Enzymes”.

2. Place a sample of pure α-D-glucose in a polarimeter and measure its observed rotation. This value will change as mutarotation occurs.