Management and Leadership in Today’s Organizations

In carrying out the responsibilities of planning, organizing, leading, and controlling, managers take on many different roles. A role is a set of behavioral expectations, or a set of activities that a person is expected to perform. Managers’ roles fall into three basic categories: informational roles, interpersonal roles, and decisional roles. These roles are summarized in (Figure). In an informational role, the manager may act as an information gatherer, an information distributor, or a spokesperson for the company. A manager’s interpersonal roles are based on various interactions with other people. Depending on the situation, a manager may need to act as a figurehead, a company leader, or a liaison. When acting in a decisional role, a manager may have to think like an entrepreneur, make decisions about resource allocation, help resolve conflicts, or negotiate compromises.

In every function performed, role taken on, and set of skills applied, a manager is a decision maker. Decision-making means choosing among alternatives. Decision-making occurs in response to the identification of a problem or an opportunity. The decisions managers make fall into two basic categories: programmed and nonprogrammed. Programmed decisions are made in response to routine situations that occur frequently in a variety of settings throughout an organization. For example, the need to hire new personnel is a common situation for most organizations. Therefore, standard procedures for recruitment and selection are developed and followed in most companies.

Table 6.5 The Many Roles Managers Play in an Organization

Infrequent, unforeseen, or very unusual problems and opportunities require nonprogrammed decisions by managers. Because these situations are unique and complex, the manager rarely has a precedent to follow. The earlier example of the Norfolk Southern employee, who had to decide the best way to salvage a five-mile-long piece of railroad track from the bottom of Lake Pontchartrain, is an example of a nonprogrammed decision. Likewise, when Hurricane Katrina was forecast to make landfall, Thomas Oreck, then CEO of the vacuum manufacturer that bears his name, had to make a series of nonprogrammed decisions. Oreck’s corporate headquarters were in New Orleans, and its primary manufacturing facility was in Long Beach, Mississippi. Before the storm hit, Oreck transferred its computer systems and call-center operations to backup locations in Colorado and planned to move headquarters to Long Beach. The storm, however, brutally hit both locations. Oreck executives began searching for lost employees, tracking down generators, assembling temporary housing for workers, and making deals with UPS to begin distributing its product (UPS brought food and water to Oreck from Atlanta and took vacuums back to the company’s distribution center there). All of these decisions were made in the middle of a very challenging crisis environment.

Whether a decision is programmed or nonprogrammed, managers typically follow five steps in the decision-making process, as illustrated in (Figure):

It can be easy (and dangerous) for managers to get stuck at any stage of the decision-making process. For example, entrepreneurs can become paralyzed evaluating the options. For the Gabby Slome, the cofounder of natural pet food maker Ollie, the idea for starting the company came after her rescue dog began having trouble digesting store-bought pet food after living on scraps. Slome decided that the pet food industry, a $30 billion a year business, was ripe for a natural food alternative. She laments, however, that she let perfect be the enemy of the very good by indulging in “analysis paralysis.”[1] 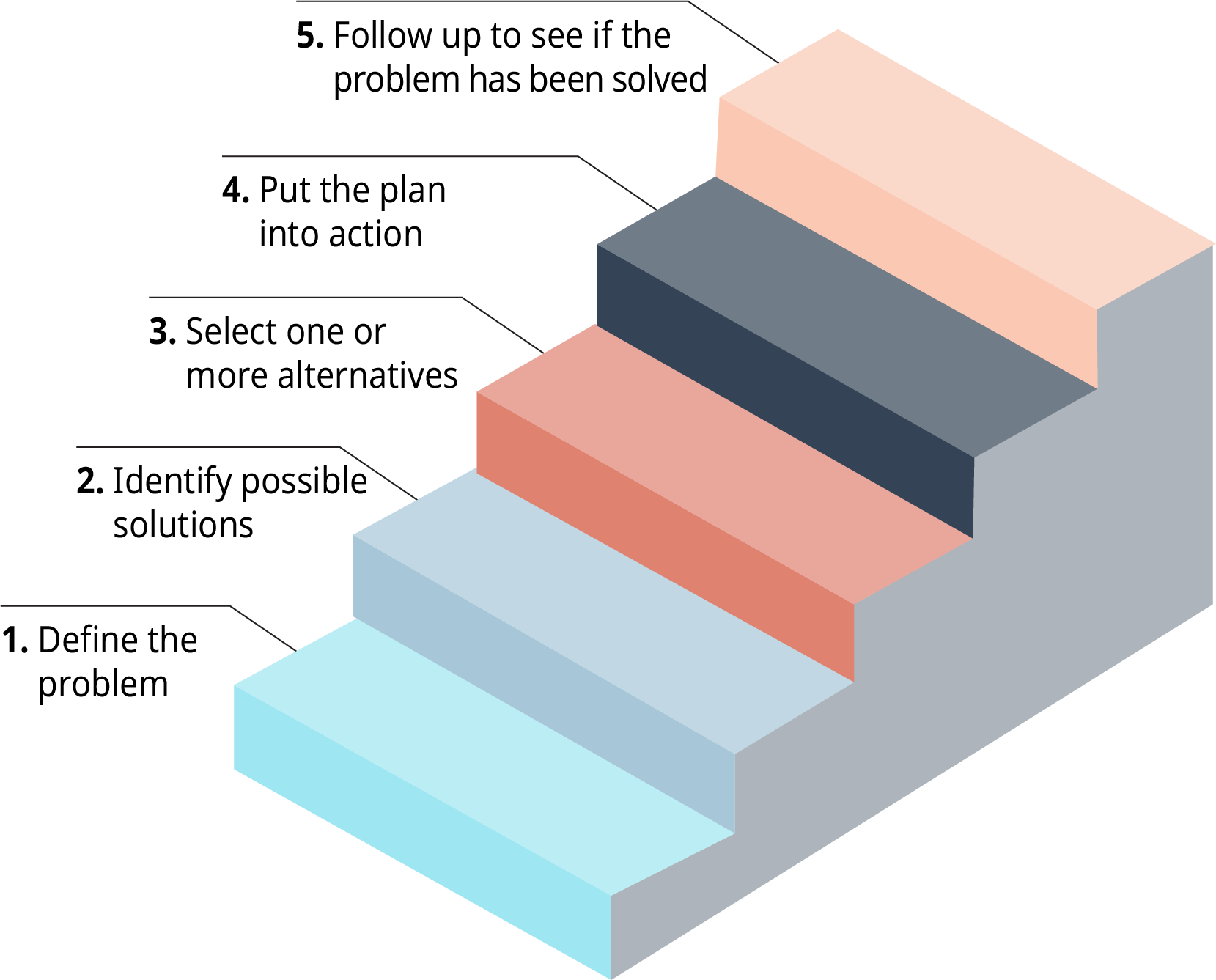 In an informational role, the manager may act as an information gatherer, an information distributor, or a spokesperson for the company. A manager’s interpersonal roles are based on various interactions with other people. Depending on the situation, a manager may need to act as a figurehead, a company leader, or a liaison.

interpersonal roles
A manager’s activities as a figurehead, company leader, or liaison.

nonprogrammed decisions
Responses to infrequent, unforeseen, or very unusual problems and opportunities where the manager does not have a precedent to follow in decision-making.