As we saw previously, the range of objects and phenomena studied in physics is immense. From the incredibly short lifetime of a nucleus to the age of Earth, from the tiny sizes of subnuclear particles to the vast distance to the edges of the known universe, from the force exerted by a jumping flea to the force between Earth and the Sun, there are enough factors of 10 to challenge the imagination of even the most experienced scientist. Giving numerical values for physical quantities and equations for physical principles allows us to understand nature much more deeply than qualitative descriptions alone. To comprehend these vast ranges, we must also have accepted units in which to express them. We shall find that even in the potentially mundane discussion of meters, kilograms, and seconds, a profound simplicity of nature appears: all physical quantities can be expressed as combinations of only seven base physical quantities.

We define a physical quantity either by specifying how it is measured or by stating how it is calculated from other measurements. For example, we might define distance and time by specifying methods for measuring them, such as using a meter stick and a stopwatch. Then, we could define average speed by stating that it is calculated as the total distance traveled divided by time of travel.

Measurements of physical quantities are expressed in terms of units, which are standardized values. For example, the length of a race, which is a physical quantity, can be expressed in units of meters (for sprinters) or kilometers (for distance runners). Without standardized units, it would be extremely difficult for scientists to express and compare measured values in a meaningful way ((Figure)). 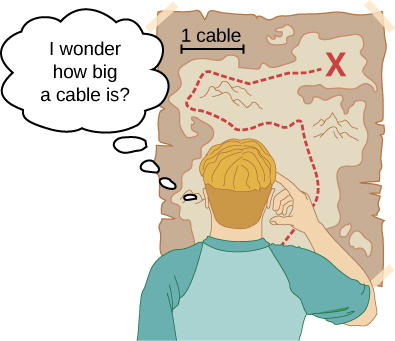 Figure 1.7 Distances given in unknown units are maddeningly useless.

Two major systems of units are used in the world: SI units (for the French Système International d’Unités), also known as the metric system, and English units (also known as the customary or imperial system). English units were historically used in nations once ruled by the British Empire and are still widely used in the United States. English units may also be referred to as the foot–pound–second (fps) system, as opposed to the centimeter–gram–second (cgs) system. You may also encounter the term SAE units, named after the Society of Automotive Engineers. Products such as fasteners and automotive tools (for example, wrenches) that are measured in inches rather than metric units are referred to as SAE fasteners or SAE wrenches.

Virtually every other country in the world (except the United States) now uses SI units as the standard. The metric system is also the standard system agreed on by scientists and mathematicians.

SI Units: Base and Derived Units

Check out a comprehensive source of information on SI units at the National Institute of Standards and Technology (NIST) Reference on Constants, Units, and Uncertainty.

Units of Time, Length, and Mass: The Second, Meter, and Kilogram

The initial chapters in this textbook are concerned with mechanics, fluids, and waves. In these subjects all pertinent physical quantities can be expressed in terms of the base units of length, mass, and time. Therefore, we now turn to a discussion of these three base units, leaving discussion of the others until they are needed later.

The SI unit for time, the second (abbreviated s), has a long history. For many years it was defined as 1/86,400 of a mean solar day. More recently, a new standard was adopted to gain greater accuracy and to define the second in terms of a nonvarying or constant physical phenomenon (because the solar day is getting longer as a result of the very gradual slowing of Earth’s rotation). Cesium atoms can be made to vibrate in a very steady way, and these vibrations can be readily observed and counted. In 1967, the second was redefined as the time required for 9,192,631,770 of these vibrations to occur ((Figure)). Note that this may seem like more precision than you would ever need, but it isn’t—GPSs rely on the precision of atomic clocks to be able to give you turn-by-turn directions on the surface of Earth, far from the satellites broadcasting their location. 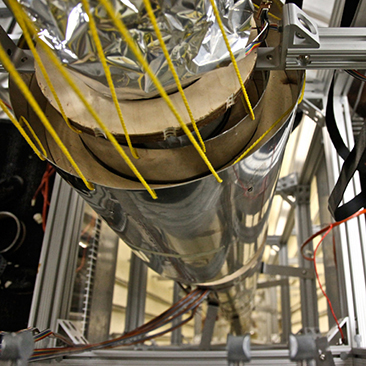 Figure 1.8 An atomic clock such as this one uses the vibrations of cesium atoms to keep time to a precision of better than a microsecond per year. The fundamental unit of time, the second, is based on such clocks. This image looks down from the top of an atomic fountain nearly 30 feet tall. (credit: Steve Jurvetson)

The SI unit for length is the meter (abbreviated m); its definition has also changed over time to become more precise. The meter was first defined in 1791 as 1/10,000,000 of the distance from the equator to the North Pole. This measurement was improved in 1889 by redefining the meter to be the distance between two engraved lines on a platinum–iridium bar now kept near Paris. By 1960, it had become possible to define the meter even more accurately in terms of the wavelength of light, so it was again redefined as 1,650,763.73 wavelengths of orange light emitted by krypton atoms. In 1983, the meter was given its current definition (in part for greater accuracy) as the distance light travels in a vacuum in 1/299,792,458 of a second ((Figure)). This change came after knowing the speed of light to be exactly 299,792,458 m/s. The length of the meter will change if the speed of light is someday measured with greater accuracy.

Figure 1.9 The meter is defined to be the distance light travels in 1/299,792,458 of a second in a vacuum. Distance traveled is speed multiplied by time.

The SI unit for mass is the kilogram (abbreviated kg); it is defined to be the mass of a platinum–iridium cylinder kept with the old meter standard at the International Bureau of Weights and Measures near Paris. Exact replicas of the standard kilogram are also kept at the U.S. National Institute of Standards and Technology (NIST), located in Gaithersburg, Maryland, outside of Washington, DC, and at other locations around the world. Scientists at NIST are currently investigating two complementary methods of redefining the kilogram (see (Figure)). The determination of all other masses can be traced ultimately to a comparison with the standard mass.

There is currently an effort to redefine the SI unit of mass in terms of more fundamental processes by 2018. You can explore the history of mass standards and the contenders in the quest to devise a new one at the website of the Physical Measurement Laboratory. 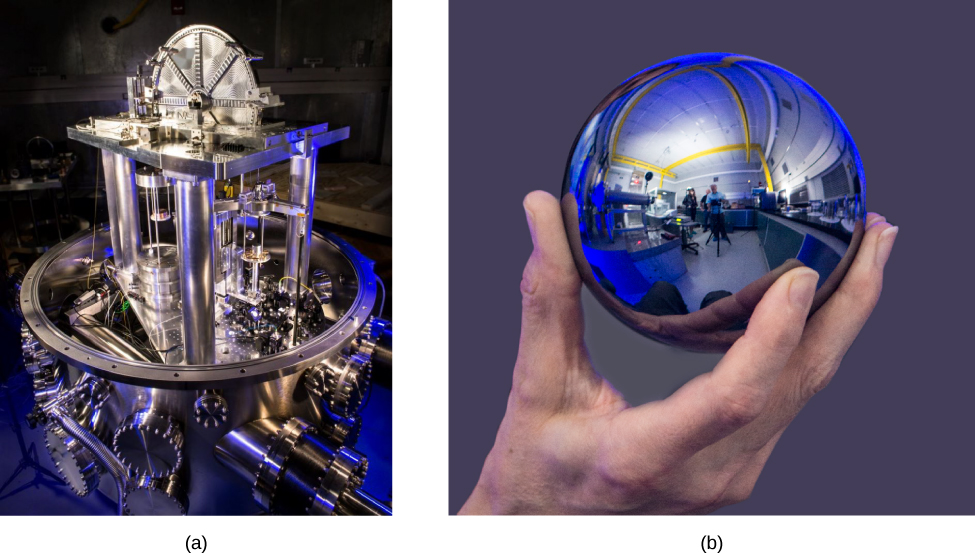 Figure 1.10 Redefining the SI unit of mass. Complementary methods are being investigated for use in an upcoming redefinition of the SI unit of mass. (a) The U.S. National Institute of Standards and Technology’s watt balance is a machine that balances the weight of a test mass against the current and voltage (the “watt”) produced by a strong system of magnets. (b) The International Avogadro Project is working to redefine the kilogram based on the dimensions, mass, and other known properties of a silicon sphere. (credit a and credit b: National Institute of Standards and Technology)

SI units are part of the metric system, which is convenient for scientific and engineering calculations because the units are categorized by factors of 10. (Figure) lists the metric prefixes and symbols used to denote various factors of 10 in SI units. For example, a centimeter is one-hundredth of a meter (in symbols, 1 cm = 10–2 m) and a kilometer is a thousand meters (1 km = 103 m). Similarly, a megagram is a million grams (1 Mg = 106 g), a nanosecond is a billionth of a second (1 ns = 10–9 s), and a terameter is a trillion meters (1 Tm = 1012 m).

The only rule when using metric prefixes is that you cannot “double them up.” For example, if you have measurements in petameters (1 Pm = 1015 m), it is not proper to talk about megagigameters, although [latex] {10}^{6}\,×\,{10}^{9}={10}^{15}. [/latex] In practice, the only time this becomes a bit confusing is when discussing masses. As we have seen, the base SI unit of mass is the kilogram (kg), but metric prefixes need to be applied to the gram (g), because we are not allowed to “double-up” prefixes. Thus, a thousand kilograms (103 kg) is written as a megagram (1 Mg) since

Incidentally, 103 kg is also called a metric ton, abbreviated t. This is one of the units outside the SI system considered acceptable for use with SI units.

Another advantage of metric systems is that the same unit can be used over extremely large ranges of values simply by scaling it with an appropriate metric prefix. The prefix is chosen by the order of magnitude of physical quantities commonly found in the task at hand. For example, distances in meters are suitable in construction, whereas distances in kilometers are appropriate for air travel, and nanometers are convenient in optical design. With the metric system there is no need to invent new units for particular applications. Instead, we rescale the units with which we are already familiar.

Since we are not allowed to “double-up” prefixes, we first need to restate the mass in grams by replacing the prefix symbol k with a factor of 103 (see (Figure)). Then, we should see which two prefixes in (Figure) are closest to the resulting power of 10 when the number is written in scientific notation. We use whichever of these two prefixes gives us a number between one and 1000.

Replacing the k in kilogram with a factor of 103, we find that

If this mass arose from a calculation, we would also want to check to determine whether a mass this large makes any sense in the context of the problem. For this, (Figure) might be helpful.

Identify some advantages of metric units.

Conversions between units require factors of 10 only, which simplifies calculations. Also, the same basic units can be scaled up or down using metric prefixes to sizes appropriate for the problem at hand.

What are the SI base units of length, mass, and time?

For each of the following scenarios, refer to (Figure) and (Figure) to determine which metric prefix on the meter is most appropriate for each of the following scenarios. (a) You want to tabulate the mean distance from the Sun for each planet in the solar system. (b) You want to compare the sizes of some common viruses to design a mechanical filter capable of blocking the pathogenic ones. (c) You want to list the diameters of all the elements on the periodic table. (d) You want to list the distances to all the stars that have now received any radio broadcasts sent from Earth 10 years ago.

English units
system of measurement used in the United States; includes units of measure such as feet, gallons, and pounds

SI units
the international system of units that scientists in most countries have agreed to use; includes units such as meters, liters, and grams