In this section, we put together all the pieces learned so far in this chapter to analyze the dynamics of rotating rigid bodies. We have analyzed motion with kinematics and rotational kinetic energy but have not yet connected these ideas with force and/or torque. In this section, we introduce the rotational equivalent to Newton’s second law of motion and apply it to rigid bodies with fixed-axis rotation.

We have thus far found many counterparts to the translational terms used throughout this text, most recently, torque, the rotational analog to force. This raises the question: Is there an analogous equation to Newton’s second law, [latex] \Sigma \overset{\to }{F}=m\overset{\to }{a}, [/latex] which involves torque and rotational motion? To investigate this, we start with Newton’s second law for a single particle rotating around an axis and executing circular motion. Let’s exert a force [latex] \overset{\to }{F} [/latex] on a point mass m that is at a distance r from a pivot point ((Figure)). The particle is constrained to move in a circular path with fixed radius and the force is tangent to the circle. We apply Newton’s second law to determine the magnitude of the acceleration [latex] a=F\text{/}m [/latex] in the direction of [latex] \overset{\to }{F} [/latex]. Recall that the magnitude of the tangential acceleration is proportional to the magnitude of the angular acceleration by [latex] a=r\alpha [/latex]. Substituting this expression into Newton’s second law, we obtain 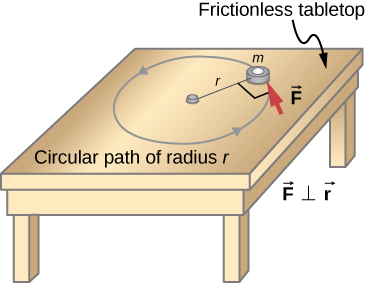 Figure 10.37 An object is supported by a horizontal frictionless table and is attached to a pivot point by a cord that supplies centripetal force. A force [latex] \overset{\to }{F} [/latex] is applied to the object perpendicular to the radius r, causing it to accelerate about the pivot point. The force is perpendicular to r.

Multiply both sides of this equation by r,

Note that the left side of this equation is the torque about the axis of rotation, where r is the lever arm and F is the force, perpendicular to r. Recall that the moment of inertia for a point particle is[latex] I=m{r}^{2} [/latex]. The torque applied perpendicularly to the point mass in (Figure) is therefore

The torque on the particle is equal to the moment of inertia about the rotation axis times the angular acceleration. We can generalize this equation to a rigid body rotating about a fixed axis.

If more than one torque acts on a rigid body about a fixed axis, then the sum of the torques equals the moment of inertia times the angular acceleration:

(Figure) is Newton’s second law for rotation and tells us how to relate torque, moment of inertia, and rotational kinematics. This is called the equation for rotational dynamics. With this equation, we can solve a whole class of problems involving force and rotation. It makes sense that the relationship for how much force it takes to rotate a body would include the moment of inertia, since that is the quantity that tells us how easy or hard it is to change the rotational motion of an object.

As before, when we found the angular acceleration, we may also find the torque vector. The second law [latex] \Sigma \overset{\to }{F}=m\overset{\to }{a} [/latex] tells us the relationship between net force and how to change the translational motion of an object. We have a vector rotational equivalent of this equation, which can be found by using (Figure) and (Figure). (Figure) relates the angular acceleration to the position and tangential acceleration vectors:

Identifying the first term on the left as the sum of the torques, and [latex] m{r}^{2} [/latex] as the moment of inertia, we arrive at Newton’s second law of rotation in vector form:

Before we apply the rotational dynamics equation to some everyday situations, let’s review a general problem-solving strategy for use with this category of problems.

Calculating the Effect of Mass Distribution on a Merry-Go-RoundConsider the father pushing a playground merry-go-round in (Figure). He exerts a force of 250 N at the edge of the 50.0-kg merry-go-round, which has a 1.50-m radius. Calculate the angular acceleration produced (a) when no one is on the merry-go-round and (b) when an 18.0-kg child sits 1.25 m away from the center. Consider the merry-go-round itself to be a uniform disk with negligible friction. 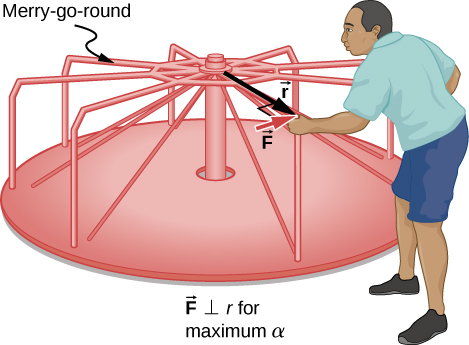 Figure 10.38 A father pushes a playground merry-go-round at its edge and perpendicular to its radius to achieve maximum torque.

The angular acceleration is less when the child is on the merry-go-round than when the merry-go-round is empty, as expected. The angular accelerations found are quite large, partly due to the fact that friction was considered to be negligible. If, for example, the father kept pushing perpendicularly for 2.00 s, he would give the merry-go-round an angular velocity of 13.3 rad/s when it is empty but only 8.89 rad/s when the child is on it. In terms of revolutions per second, these angular velocities are 2.12 rev/s and 1.41 rev/s, respectively. The father would end up running at about 50 km/h in the first case.

The fan blades on a jet engine have a moment of inertia [latex] 30.0{\,\text{kg-m}}^{2} [/latex]. In 10 s, they rotate counterclockwise from rest up to a rotation rate of 20 rev/s. (a) What torque must be applied to the blades to achieve this angular acceleration? (b) What is the torque required to bring the fan blades rotating at 20 rev/s to a rest in 20 s?

If you were to stop a spinning wheel with a constant force, where on the wheel would you apply the force to produce the maximum negative acceleration?

A rod is pivoted about one end. Two forces [latex] \overset{\to }{F}\text{and}\,-\overset{\to }{F} [/latex] are applied to it. Under what circumstances will the rod not rotate?

If the forces are along the axis of rotation, or if they have the same lever arm and are applied at a point on the rod.

You have a grindstone (a disk) that is 90.0 kg, has a 0.340-m radius, and is turning at 90.0 rpm, and you press a steel axe against it with a radial force of 20.0 N. (a) Assuming the kinetic coefficient of friction between steel and stone is 0.20, calculate the angular acceleration of the grindstone. (b) How many turns will the stone make before coming to rest?

A flywheel ([latex] I=50{\,\text{kg-m}}^{2} [/latex]) starting from rest acquires an angular velocity of 200.0 rad/s while subject to a constant torque from a motor for 5 s. (a) What is the angular acceleration of the flywheel? (b) What is the magnitude of the torque?

A constant torque is applied to a rigid body whose moment of inertia is [latex] 4.0{\,\text{kg-m}}^{2} [/latex] around the axis of rotation. If the wheel starts from rest and attains an angular velocity of 20.0 rad/s in 10.0 s, what is the applied torque?

A uniform cylindrical grinding wheel of mass 50.0 kg and diameter 1.0 m is turned on by an electric motor. The friction in the bearings is negligible. (a) What torque must be applied to the wheel to bring it from rest to 120 rev/min in 20 revolutions? (b) A tool whose coefficient of kinetic friction with the wheel is 0.60 is pressed perpendicularly against the wheel with a force of 40.0 N. What torque must be supplied by the motor to keep the wheel rotating at a constant angular velocity?

Suppose when Earth was created, it was not rotating. However, after the application of a uniform torque after 6 days, it was rotating at 1 rev/day. (a) What was the angular acceleration during the 6 days? (b) What torque was applied to Earth during this period? (c) What force tangent to Earth at its equator would produce this torque? 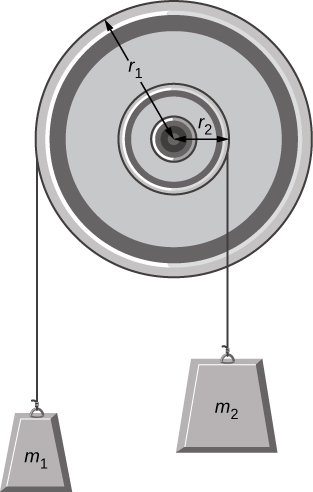 A block of mass 3 kg slides down an inclined plane at an angle of [latex] 45\text{°} [/latex] with a massless tether attached to a pulley with mass 1 kg and radius 0.5 m at the top of the incline (see the following figure). The pulley can be approximated as a disk. The coefficient of kinetic friction on the plane is 0.4. What is the acceleration of the block? 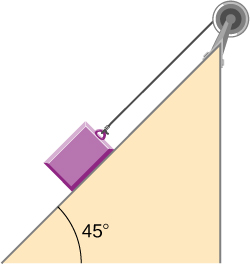 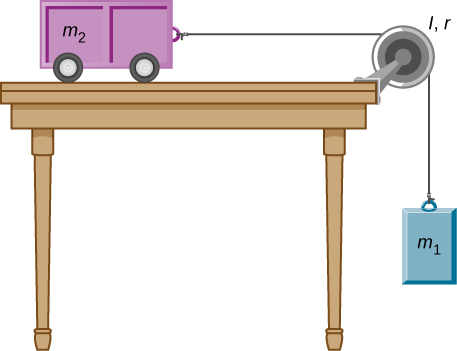 A uniform rod of mass and length is held vertically by two strings of negligible mass, as shown below. (a) Immediately after the string is cut, what is the linear acceleration of the free end of the stick? (b) Of the middle of the stick? 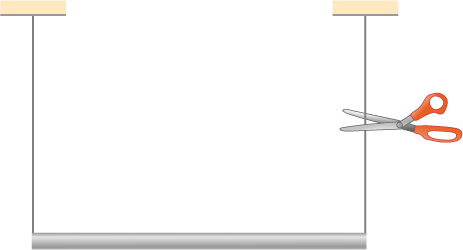 A thin stick of mass 0.2 kg and length [latex] L=0.5\,\text{m} [/latex] is attached to the rim of a metal disk of mass [latex] M=2.0\,\text{kg} [/latex] and radius [latex] R=0.3\,\text{m} [/latex]. The stick is free to rotate around a horizontal axis through its other end (see the following figure). (a) If the combination is released with the stick horizontal, what is the speed of the center of the disk when the stick is vertical? (b) What is the acceleration of the center of the disk at the instant the stick is released? (c) At the instant the stick passes through the vertical? 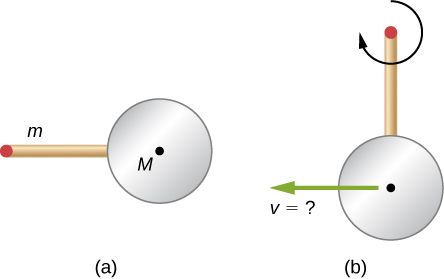