11.4 Precession of a Gyroscope 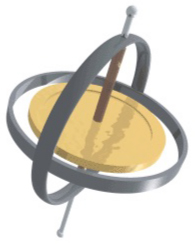 Figure 11.19 A gyroscope consists of a spinning disk about an axis that is free to assume any orientation.

We illustrate the precession of a gyroscope with an example of a top in the next two figures. If the top is placed on a flat surface near the surface of Earth at an angle to the vertical and is not spinning, it will fall over, due to the force of gravity producing a torque acting on its center of mass. This is shown in (Figure)(a). However, if the top is spinning on its axis, rather than topple over due to this torque, it precesses about the vertical, shown in part (b) of the figure. This is due to the torque on the center of mass, which provides the change in angular momentum. 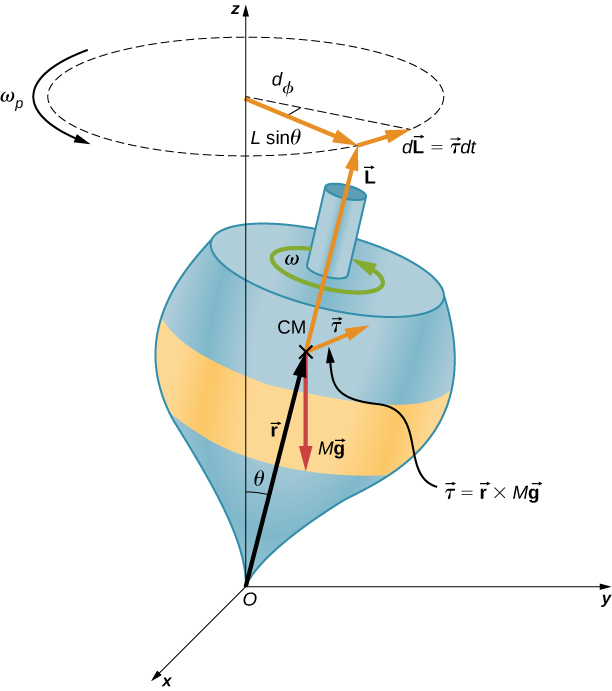 We can experience this phenomenon first hand by holding a spinning bicycle wheel and trying to rotate it about an axis perpendicular to the spin axis. As shown in (Figure), the person applies forces perpendicular to the spin axis in an attempt to rotate the wheel, but instead, the wheel axis starts to change direction to her left due to the applied torque. 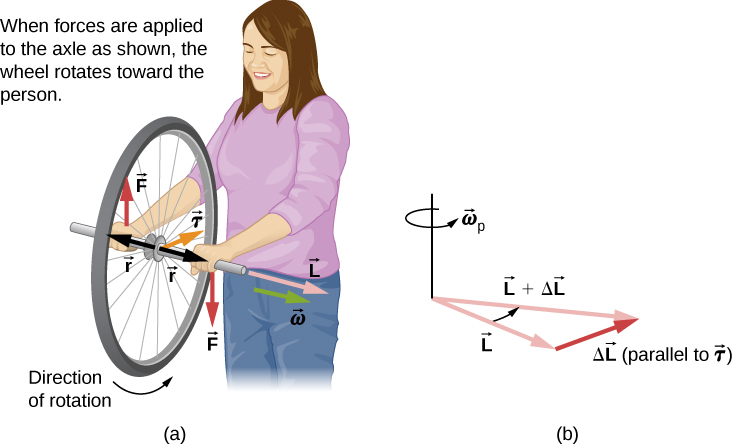 Figure 11.22 (a) A person holding the spinning bike wheel lifts it with her right hand and pushes down with her left hand in an attempt to rotate the wheel. This action creates a torque directly toward her. This torque causes a change in angular momentum [latex] \text{Δ}\overset{\to }{L} [/latex] in exactly the same direction. (b) A vector diagram depicting how [latex] \text{Δ}\overset{\to }{L}\,\text{and}\,\overset{\to }{L} [/latex] add, producing a new angular momentum pointing more toward the person. The wheel moves toward the person, perpendicular to the forces she exerts on it.

We all know how easy it is for a bicycle to tip over when sitting on it at rest. But when riding the bicycle at a good pace, it is harder to tip it over because we must change the angular momentum vector of the spinning wheels.

View the video on gyroscope precession for a complete demonstration of precession of the bicycle wheel.

Also, when a spinning disk is put in a box such as a Blu-Ray player, try to move it. It is easy to translate the box in a given direction but difficult to rotate it about an axis perpendicular to the axis of the spinning disk, since we are putting a torque on the box that will cause the angular momentum vector of the spinning disk to precess.

We can calculate the precession rate of the top in (Figure). From (Figure), we see that the magnitude of the torque is

The angle the top precesses through in time dt is

Earth itself acts like a gigantic gyroscope. Its angular momentum is along its axis and currently points at Polaris, the North Star. But Earth is slowly precessing (once in about 26,000 years) due to the torque of the Sun and the Moon on its nonspherical shape.

The moment of inertia of the disk is

The angular velocity of the disk is

We can now substitute in (Figure). The precessional angular velocity is

The precessional period of the gyroscope is

Gyroscopes used in guidance systems to indicate directions in space must have an angular momentum that does not change in direction. When placed in the vehicle, they are put in a compartment that is separated from the main fuselage, such that changes in the orientation of the fuselage does not affect the orientation of the gyroscope. If the space vehicle is subjected to large forces and accelerations how can the direction of the gyroscopes angular momentum be constant at all times?

A torque is needed in the direction perpendicular to the angular momentum vector in order to change its direction. These forces on the space vehicle are external to the container in which the gyroscope is mounted and do not impart torques to the gyroscope’s rotating disk.

Earth precesses about its vertical axis with a period of 26,000 years. Discuss whether (Figure) can be used to calculate the precessional angular velocity of Earth.

A gyroscope has a 0.5-kg disk that spins at 40 rev/s. The center of mass of the disk is 10 cm from a pivot which is also the radius of the disk. What is the precession angular velocity?

The precession angular velocity of a gyroscope is 1.0 rad/s. If the mass of the rotating disk is 0.4 kg and its radius is 30 cm, as well as the distance from the center of mass to the pivot, what is the rotation rate in rev/s of the disk?

The axis of Earth makes a [latex] 23.5\text{°} [/latex] angle with a direction perpendicular to the plane of Earth’s orbit. As shown below, this axis precesses, making one complete rotation in 25,780 y.

(a) Calculate the change in angular momentum in half this time.

(b) What is the average torque producing this change in angular momentum?

(c) If this torque were created by a pair of forces acting at the most effective point on the equator, what would the magnitude of each force be? 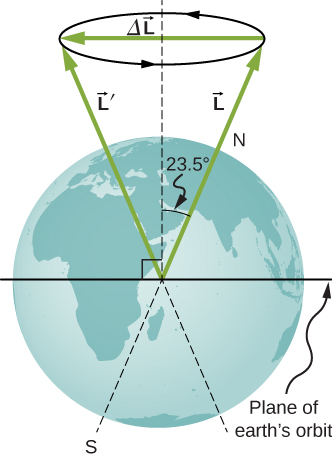 A marble is rolling across the floor at a speed of 7.0 m/s when it starts up a plane inclined at [latex] 30\text{°} [/latex] to the horizontal. (a) How far along the plane does the marble travel before coming to a rest? (b) How much time elapses while the marble moves up the plane?

Repeat the preceding problem replacing the marble with a hollow sphere. Explain the new results.

The hollow sphere has a larger moment of inertia, and therefore is harder to bring to a rest than the marble, or solid sphere. The distance travelled is larger and the time elapsed is longer.

Repeat the preceding problem for a hollow sphere of the same radius and mass and initial speed. Explain the differences in the results.

The moment of inertia is less for the hollow sphere, therefore less work is required to stop it. Likewise it rolls up the incline a shorter distance than the hoop.

A particle has mass 0.5 kg and is traveling along the line [latex] x=5.0\,\text{m} [/latex] at 2.0 m/s in the positive y-direction. What is the particle’s angular momentum about the origin?

Suppose you start an antique car by exerting a force of 300 N on its crank for 0.250 s. What is the angular momentum given to the engine if the handle of the crank is 0.300 m from the pivot and the force is exerted to create maximum torque the entire time?

In the conservation of angular momentum equation, the rotation rate appears on both sides so we keep the (rev/min) notation as the angular velocity can be multiplied by a constant to get (rev/min):

A boy stands at the center of a platform that is rotating without friction at 1.0 rev/s. The boy holds weights as far from his body as possible. At this position the total moment of inertia of the boy, platform, and weights is [latex] 5.0\,\text{kg}·{\text{m}}^{2}. [/latex] The boy draws the weights in close to his body, thereby decreasing the total moment of inertia to [latex] 1.5\,\text{kg}·{\text{m}}^{2}. [/latex] (a) What is the final angular velocity of the platform? (b) By how much does the rotational kinetic energy increase?

A thin meter stick of mass 150 g rotates around an axis perpendicular to the stick’s long axis at an angular velocity of 240 rev/min. What is the angular momentum of the stick if the rotation axis (a) passes through the center of the stick? (b) Passes through one end of the stick? 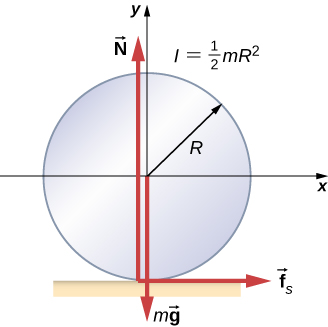 A bowling ball of radius 8.5 cm is tossed onto a bowling lane with speed 9.0 m/s. The direction of the toss is to the left, as viewed by the observer, so the bowling ball starts to rotate counterclockwise when in contact with the floor. The coefficient of kinetic friction on the lane is 0.3. (a) What is the time required for the ball to come to the point where it is not slipping? What is the distance d to the point where the ball is rolling without slipping?

A small ball of mass 0.50 kg is attached by a massless string to a vertical rod that is spinning as shown below. When the rod has an angular velocity of 6.0 rad/s, the string makes an angle of [latex] 30\text{°} [/latex] with respect to the vertical. (a) If the angular velocity is increased to 10.0 rad/s, what is the new angle of the string? (b) Calculate the initial and final angular momenta of the ball. (c) Can the rod spin fast enough so that the ball is horizontal?

A bug flying horizontally at 1.0 m/s collides and sticks to the end of a uniform stick hanging vertically. After the impact, the stick swings out to a maximum angle of [latex] 5.0\text{°} [/latex] from the vertical before rotating back. If the mass of the stick is 10 times that of the bug, calculate the length of the stick.