According to Newton’s second law of motion, the linear acceleration of a rigid body is caused by a net force acting on it, or

This vector equation is equivalent to the following three scalar equations for the components of the net force:

Analogously to (Figure), we can state that the rotational acceleration [latex] \overset{\to }{\alpha } [/latex] of a rigid body about a fixed axis of rotation is caused by the net torque acting on the body, or

Here [latex] I [/latex] is the rotational inertia of the body in rotation about this axis and the summation is over all torques [latex] {\overset{\to }{\tau }}_{k} [/latex] of external forces in (Figure). In equilibrium, the rotational acceleration is zero. By setting to zero the right-hand side of (Figure), we obtain the second equilibrium condition:

The second equilibrium condition means that in equilibrium, there is no net external torque to cause rotation about any axis.

The first and second equilibrium conditions are stated in a particular reference frame. The first condition involves only forces and is therefore independent of the origin of the reference frame. However, the second condition involves torque, which is defined as a cross product, [latex] {\overset{\to }{\tau }}_{k}={\overset{\to }{r}}_{k}\,×\,{\overset{\to }{F}}_{k}, [/latex] where the position vector [latex] {\overset{\to }{r}}_{k} [/latex] with respect to the axis of rotation of the point where the force is applied enters the equation. Therefore, torque depends on the location of the axis in the reference frame. However, when rotational and translational equilibrium conditions hold simultaneously in one frame of reference, then they also hold in any other inertial frame of reference, so that the net torque about any axis of rotation is still zero. The explanation for this is fairly straightforward.

The practical implication of this is that when applying equilibrium conditions for a rigid body, we are free to choose any point as the origin of the reference frame. Our choice of reference frame is dictated by the physical specifics of the problem we are solving. In one frame of reference, the mathematical form of the equilibrium conditions may be quite complicated, whereas in another frame, the same conditions may have a simpler mathematical form that is easy to solve. The origin of a selected frame of reference is called the pivot point.

In the most general case, equilibrium conditions are expressed by the six scalar equations ((Figure) and (Figure)). For planar equilibrium problems with rotation about a fixed axis, which we consider in this chapter, we can reduce the number of equations to three. The standard procedure is to adopt a frame of reference where the z-axis is the axis of rotation. With this choice of axis, the net torque has only a z-component, all forces that have non-zero torques lie in the xy-plane, and therefore contributions to the net torque come from only the x– and y-components of external forces. Thus, for planar problems with the axis of rotation perpendicular to the xy-plane, we have the following three equilibrium conditions for forces and torques:

where the summation is over all N external forces acting on the body and over their torques. In (Figure), we simplified the notation by dropping the subscript z, but we understand here that the summation is over all contributions along the z-axis, which is the axis of rotation. In (Figure), the z-component of torque [latex] {\overset{\to }{\tau }}_{k} [/latex] from the force [latex] {\overset{\to }{F}}_{k} [/latex] is 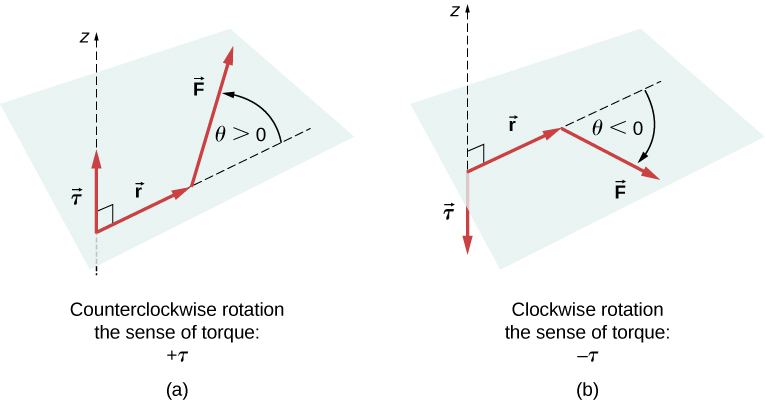 View this demonstration to see two forces act on a rigid square in two dimensions. At all times, the static equilibrium conditions given by (Figure) through (Figure) are satisfied. You can vary magnitudes of the forces and their lever arms and observe the effect these changes have on the square.

Center of Gravity of a Car

A passenger car with a 2.5-m wheelbase has 52% of its weight on the front wheels on level ground, as illustrated in (Figure). Where is the CM of this car located with respect to the rear axle? 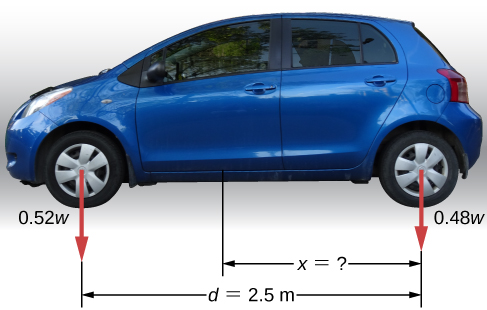 Figure 12.4 The weight distribution between the axles of a car. Where is the center of gravity located?

We do not know the weight w of the car. All we know is that when the car rests on a level surface, 0.52w pushes down on the surface at contact points of the front wheels and 0.48w pushes down on the surface at contact points of the rear wheels. Also, the contact points are separated from each other by the distance [latex] d=2.5\,\text{m}. [/latex] At these contact points, the car experiences normal reaction forces with magnitudes [latex] {F}_{\text{F}}=0.52w [/latex] and [latex] {F}_{\text{R}}=0.48w [/latex] on the front and rear axles, respectively. We also know that the car is an example of a rigid body in equilibrium whose entire weight w acts at its CM. The CM is located somewhere between the points where the normal reaction forces act, somewhere at a distance x from the point where [latex] {F}_{R} [/latex] acts. Our task is to find x. Thus, we identify three forces acting on the body (the car), and we can draw a free-body diagram for the extended rigid body, as shown in (Figure). 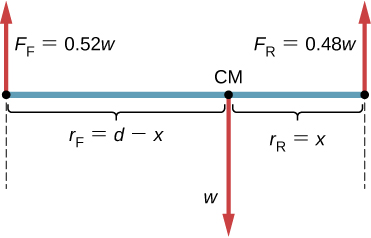 Figure 12.5 The free-body diagram for the car clearly indicates force vectors acting on the car and distances to the center of mass (CM). When CM is selected as the pivot point, these distances are lever arms of normal reaction forces. Notice that vector magnitudes and lever arms do not need to be drawn to scale, but all quantities of relevance must be clearly labeled.

We are almost ready to write down equilibrium conditions (Figure) through (Figure) for the car, but first we must decide on the reference frame. Suppose we choose the x-axis along the length of the car, the y-axis vertical, and the z-axis perpendicular to this xy-plane. With this choice we only need to write (Figure) and (Figure) because all the y-components are identically zero. Now we need to decide on the location of the pivot point. We can choose any point as the location of the axis of rotation (z-axis). Suppose we place the axis of rotation at CM, as indicated in the free-body diagram for the car. At this point, we are ready to write the equilibrium conditions for the car.

This condition is trivially satisfied because when we substitute the data, (Figure) becomes [latex] +0.52w-w+0.48w=0. [/latex] The second equilibrium condition, (Figure), reads

Choosing the pivot at the position of the front axle does not change the result. The free-body diagram for this pivot location is presented in (Figure). For this choice of pivot point, the second equilibrium condition is

When we substitute the quantities indicated in the diagram, we obtain 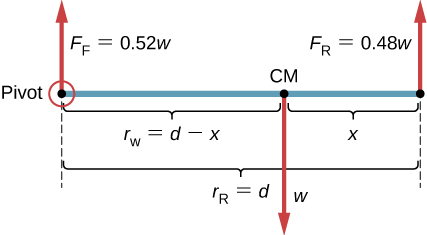 Figure 12.6 The equivalent free-body diagram for the car; the pivot is clearly indicated.

This example shows that when solving static equilibrium problems, we are free to choose the pivot location. For different choices of the pivot point we have different sets of equilibrium conditions to solve. However, all choices lead to the same solution to the problem.

Solve (Figure) by choosing the pivot at the location of the rear axle.

Explain which one of the following situations satisfies both equilibrium conditions: (a) a tennis ball that does not spin as it travels in the air; (b) a pelican that is gliding in the air at a constant velocity at one altitude; or (c) a crankshaft in the engine of a parked car.

View this demonstration to see three weights that are connected by strings over pulleys and tied together in a knot. You can experiment with the weights to see how they affect the equilibrium position of the knot and, at the same time, see the vector-diagram representation of the first equilibrium condition at work.

A small pan of mass 42.0 g is supported by two strings, as shown in (Figure). The maximum tension that the string can support is 2.80 N. Mass is added gradually to the pan until one of the strings snaps. Which string is it? How much mass must be added for this to occur? 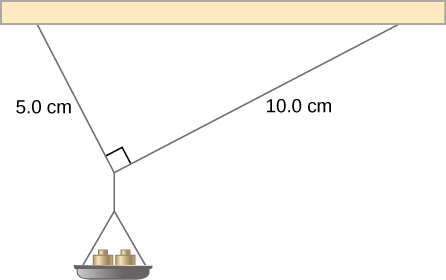 Figure 12.7 Mass is added gradually to the pan until one of the strings snaps. 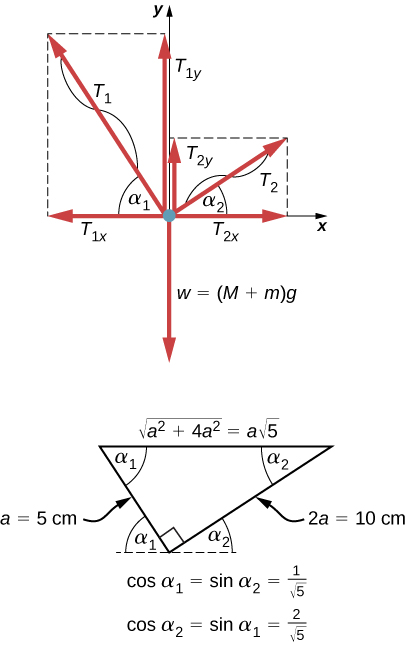 Figure 12.8 Free-body diagram for the knot in (Figure).

The weight w pulling on the knot is due to the mass M of the pan and mass m added to the pan, or [latex] w=(M+m)g. [/latex] With the help of the free-body diagram in (Figure), we can set up the equilibrium conditions for the knot:

From the free-body diagram, the magnitudes of components in these equations are

We substitute these components into the equilibrium conditions and simplify. We then obtain two equilibrium equations for the tensions:

The string breaks when the tension reaches the critical value of [latex] {T}_{1}=2.80\,\text{N}. [/latex] The preceding equation can be solved for the critical mass m that breaks the string:

Suppose that the mechanical system considered in this example is attached to a ceiling inside an elevator going up. As long as the elevator moves up at a constant speed, the result stays the same because the weight [latex] w [/latex] does not change. If the elevator moves up with acceleration, the critical mass is smaller because the weight of [latex] M+m [/latex] becomes larger by an apparent weight due to the acceleration of the elevator. Still, in all cases the shorter string breaks first.

What can you say about the velocity of a moving body that is in dynamic equilibrium?

Under what conditions can a rotating body be in equilibrium? Give an example.

What three factors affect the torque created by a force relative to a specific pivot point?

magnitude and direction of the force, and its lever arm

Mechanics sometimes put a length of pipe over the handle of a wrench when trying to remove a very tight bolt. How does this help?

For the next four problems, evaluate the statement as either true or false and explain your answer.

If there is only one external force (or torque) acting on an object, it cannot be in equilibrium.

True, as the sum of forces cannot be zero in this case unless the force itself is zero.

If an object is in equilibrium there must be an even number of forces acting on it.

If an odd number of forces act on an object, the object cannot be in equilibrium.

False, provided forces add to zero as vectors then equilibrium can be achieved.

A body moving in a circle with a constant speed is in rotational equilibrium.

What purpose is served by a long and flexible pole carried by wire-walkers?

It helps a wire-walker to maintain equilibrium.

When opening a door, you push on it perpendicularly with a force of 55.0 N at a distance of 0.850 m from the hinges. What torque are you exerting relative to the hinges?

Find the magnitude of the tension in each supporting cable shown below. In each case, the weight of the suspended body is 100.0 N and the masses of the cables are negligible.

The uniform seesaw is balanced at its center of mass, as seen below. The smaller boy on the right has a mass of 40.0 kg. What is the mass of his friend?

center of gravity
point where the weight vector is attached

first equilibrium condition
expresses translational equilibrium; all external forces acting on the body balance out and their vector sum is zero

gravitational torque
torque on the body caused by its weight; it occurs when the center of gravity of the body is not located on the axis of rotation

second equilibrium condition
expresses rotational equilibrium; all torques due to external forces acting on the body balance out and their vector sum is zero