In the preceding section, we derived a formula for calculating the variation in pressure for a fluid in hydrostatic equilibrium. As it turns out, this is a very useful calculation. Measurements of pressure are important in daily life as well as in science and engineering applications. In this section, we discuss different ways that pressure can be reported and measured.

Some gauges are designed to measure negative pressure. For example, many physics experiments must take place in a vacuum chamber, a rigid chamber from which some of the air is pumped out. The pressure inside the vacuum chamber is less than atmospheric pressure, so the pressure gauge on the chamber reads a negative value.

Unlike gauge pressure, absolute pressure accounts for atmospheric pressure, which in effect adds to the pressure in any fluid not enclosed in a rigid container.

The absolute pressure, or total pressure, is the sum of gauge pressure and atmospheric pressure:

A host of devices are used for measuring pressure, ranging from tire gauges to blood pressure monitors. Many other types of pressure gauges are commonly used to test the pressure of fluids, such as mechanical pressure gauges. We will explore some of these in this section.

Figure 14.11 (a) Gauges are used to measure and monitor pressure in gas cylinders. Compressed gases are used in many industrial as well as medical applications. (b) Tire pressure gauges come in many different models, but all are meant for the same purpose: to measure the internal pressure of the tire. This enables the driver to keep the tires inflated at optimal pressure for load weight and driving conditions. (c) An ionization gauge is a high-sensitivity device used to monitor the pressure of gases in an enclosed system. Neutral gas molecules are ionized by the release of electrons, and the current is translated into a pressure reading. Ionization gauges are commonly used in industrial applications that rely on vacuum systems.

One of the most important classes of pressure gauges applies the property that pressure due to the weight of a fluid of constant density is given by [latex] p=h\rho g [/latex]. The U-shaped tube shown in (Figure) is an example of a manometer; in part (a), both sides of the tube are open to the atmosphere, allowing atmospheric pressure to push down on each side equally so that its effects cancel.

Figure 14.12 An open-tube manometer has one side open to the atmosphere. (a) Fluid depth must be the same on both sides, or the pressure each side exerts at the bottom will be unequal and liquid will flow from the deeper side. (b) A positive gauge pressure [latex] {p}_{\text{g}}=h\rho g [/latex] transmitted to one side of the manometer can support a column of fluid of height h. (c) Similarly, atmospheric pressure is greater than a negative gauge pressure [latex] {p}_{\text{g}} [/latex] by an amount [latex] h\rho g [/latex]. The jar’s rigidity prevents atmospheric pressure from being transmitted to the peanuts.

Manometers typically use a U-shaped tube of a fluid (often mercury) to measure pressure. A barometer (see (Figure)) is a device that typically uses a single column of mercury to measure atmospheric pressure. The barometer, invented by the Italian mathematician and physicist Evangelista Torricelli (1608–1647) in 1643, is constructed from a glass tube closed at one end and filled with mercury. The tube is then inverted and placed in a pool of mercury. This device measures atmospheric pressure, rather than gauge pressure, because there is a nearly pure vacuum above the mercury in the tube. The height of the mercury is such that [latex] h\rho g={p}_{\text{atm}} [/latex]. When atmospheric pressure varies, the mercury rises or falls. 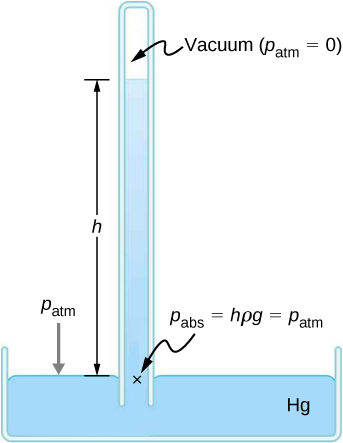 Fluid Heights in an Open U-Tube 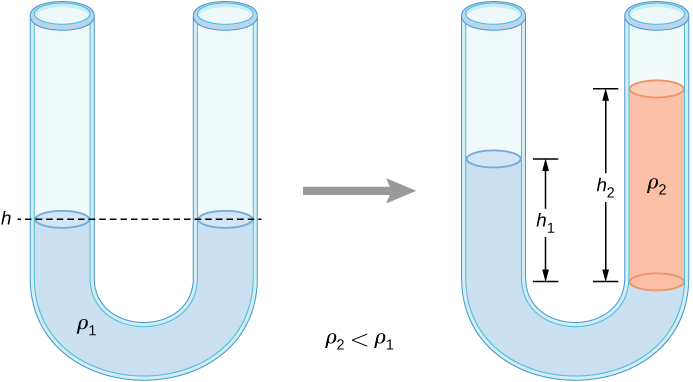 Figure 14.14 Two liquids of different densities are shown in a U-tube.

Mercury is a hazardous substance. Why do you suppose mercury is typically used in barometers instead of a safer fluid such as water?

As stated earlier, the SI unit for pressure is the pascal (Pa), where

In addition to the pascal, many other units for pressure are in common use ((Figure)). In meteorology, atmospheric pressure is often described in the unit of millibars (mbar), where

The millibar is a convenient unit for meteorologists because the average atmospheric pressure at sea level on Earth is [latex] 1.013\,×\,{10}^{5}\,\text{Pa}=1013\,\text{mbar}=1\,\text{atm} [/latex]. Using the equations derived when considering pressure at a depth in a fluid, pressure can also be measured as millimeters or inches of mercury. The pressure at the bottom of a 760-mm column of mercury at [latex] 0\,\text{°C} [/latex] in a container where the top part is evacuated is equal to the atmospheric pressure. Thus, 760 mm Hg is also used in place of 1 atmosphere of pressure. In vacuum physics labs, scientists often use another unit called the torr, named after Torricelli, who, as we have just seen, invented the mercury manometer for measuring pressure. One torr is equal to a pressure of 1 mm Hg.

Explain why the fluid reaches equal levels on either side of a manometer if both sides are open to the atmosphere, even if the tubes are of different diameters.

How tall must a water-filled manometer be to measure blood pressure as high as 300 mm Hg?

Assuming bicycle tires are perfectly flexible and support the weight of bicycle and rider by pressure alone, calculate the total area of the tires in contact with the ground if a bicycle and rider have a total mass of 80.0 kg, and the gauge pressure in the tires is [latex] 3.50\,×\,{10}^{5}\,\text{Pa} [/latex].