What could this mean? What happens when a source approaches the speed of sound? It was once argued by some scientists that such a large pressure wave would result from the constructive interference of the sound waves, that it would be impossible for a plane to exceed the speed of sound because the pressures would be great enough to destroy the airplane. But now planes routinely fly faster than the speed of sound. On July 28, 1976, Captain Eldon W. Joersz and Major George T. Morgan flew a Lockheed SR-71 Blackbird #61-7958 at 3529.60 km/h (2193.20 mi/h), which is Mach 2.85. The Mach number is the speed of the source divided by the speed of sound:

You will see that interesting phenomena occur when a source approaches and exceeds the speed of sound.

What happens to the sound produced by a moving source, such as a jet airplane, that approaches or even exceeds the speed of sound? The answer to this question applies not only to sound but to all other waves as well. Suppose a jet plane is coming nearly straight at you, emitting a sound of frequency [latex] {f}_{\text{s}}. [/latex] The greater the plane’s speed [latex] {v}_{\text{s}}, [/latex] the greater the Doppler shift and the greater the value observed for [latex] {f}_{\text{o}} [/latex] ((Figure)).

If the source exceeds the speed of sound, no sound is received by the observer until the source has passed, so that the sounds from the approaching source are mixed with those from it when receding. This mixing appears messy, but something interesting happens—a shock wave is created ((Figure)). 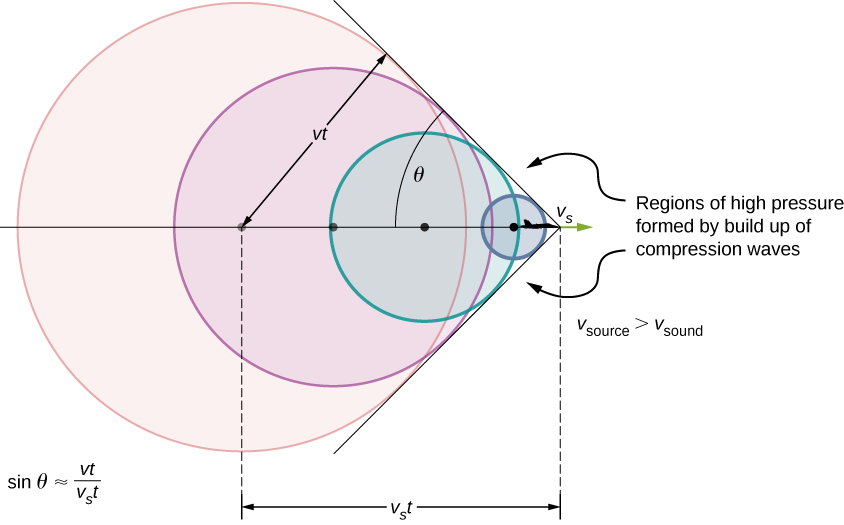 Figure 17.36 Sound waves from a source that moves faster than the speed of sound spread spherically from the point where they are emitted, but the source moves ahead of each wave. Constructive interference along the lines shown (actually a cone in three dimensions) creates a shock wave called a sonic boom. The faster the speed of the source, the smaller the angle [latex] \theta [/latex].

Constructive interference along the lines shown (a cone in three dimensions) from similar sound waves arriving there simultaneously. This superposition forms a disturbance called a shock wave, a constructive interference of sound created by an object moving faster than sound. Inside the cone, the interference is mostly destructive, so the sound intensity there is much less than on the shock wave. The angle of the shock wave can be found from the geometry. In time t the source has moved [latex] {v}_{\text{s}}t [/latex] and the sound wave has moved a distance vt and the angle can be found using [latex] \text{sin}\,\theta =\frac{vt}{{v}_{\text{s}}t}=\frac{v}{{v}_{\text{s}}}. [/latex] Note that the Mach number is defined as [latex] \frac{{v}_{\text{s}}}{v} [/latex] so the sine of the angle equals the inverse of the Mach number,

An aircraft creates two shock waves, one from its nose and one from its tail ((Figure)). During television coverage of space shuttle landings, two distinct booms could often be heard. These were separated by exactly the time it would take the shuttle to pass by a point. Observers on the ground often do not see the aircraft creating the sonic boom, because it has passed by before the shock wave reaches them, as seen in the figure. If the aircraft flies close by at low altitude, pressures in the sonic boom can be destructive and break windows as well as rattle nerves. Because of how destructive sonic booms can be, supersonic flights are banned over populated areas. 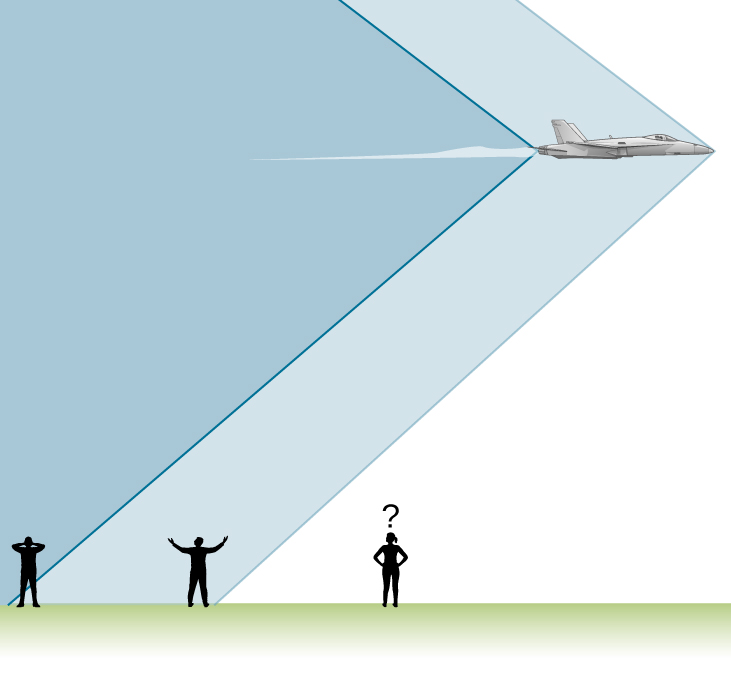 figure 17.37 Two sonic booms experienced by observers, created by the nose and tail of an aircraft as the shock wave sweeps along the ground, are observed on the ground after the plane has passed by.

Shock waves are one example of a broader phenomenon called bow wakes. A bow wake, such as the one in (Figure), is created when the wave source moves faster than the wave propagation speed. Water waves spread out in circles from the point where created, and the bow wake is the familiar V-shaped wake, trailing the source. A more exotic bow wake is created when a subatomic particle travels through a medium faster than the speed of light travels in that medium. (In a vacuum, the maximum speed of light is [latex] c=3.00\,×\,{10}^{8}\,\text{m/s;} [/latex] in the medium of water, the speed of light is closer to 0.75c.) If the particle creates light in its passage, that light spreads on a cone with an angle indicative of the speed of the particle, as illustrated in (Figure). Such a bow wake is called Cerenkov radiation and is commonly observed in particle physics. 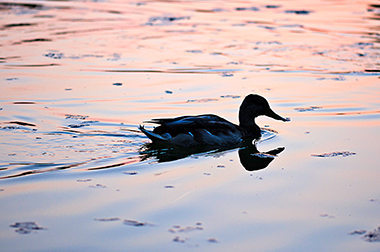 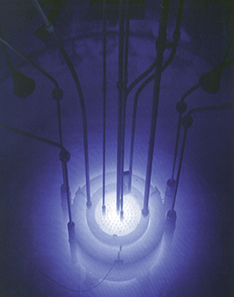 Figure 17.39 The blue glow in this research reactor pool is Cerenkov radiation caused by subatomic particles traveling faster than the speed of light in water. (credit: U.S. Nuclear Regulatory Commission)

What is the difference between a sonic boom and a shock wave?

Due to efficiency considerations related to its bow wake, the supersonic transport aircraft must maintain a cruising speed that is a constant ratio to the speed of sound (a constant Mach number). If the aircraft flies from warm air into colder air, should it increase or decrease its speed? Explain your answer.

Show Answer
The speed of sound decreases as the temperature decreases. The Mach number is equal to [latex] M=\frac{{v}_{\text{s}}}{v}, [/latex] so the plane should slow down.
When you hear a sonic boom, you often cannot see the plane that made it. Why is that?

An airplane moves at Mach 1.2 and produces a shock wave. (a) What is the speed of the plane in meters per second? (b) What is the angle that the shock wave moves?

A 0.80-m-long tube is opened at both ends. The air temperature is [latex] 26\text{°}\text{C}\text{.} [/latex] The air in the tube is oscillated using a speaker attached to a signal generator. What are the wavelengths and frequencies of first two modes of sound waves that resonate in the tube?

A tube filled with water has a valve at the bottom to allow the water to flow out of the tube. As the water is emptied from the tube, the length L of the air column changes. A 1024-Hz tuning fork is placed at the opening of the tube. Water is removed from the tube until the [latex] n=5 [/latex] mode of a sound wave resonates. What is the length of the air column if the temperature of the air in the room is [latex] 18\text{°}\text{C?} [/latex] 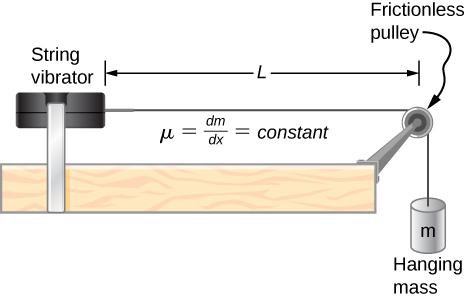 Early Doppler shift experiments were conducted using a band playing music on a train. A trumpet player on a moving railroad flatcar plays a 320-Hz note. The sound waves heard by a stationary observer on a train platform hears a frequency of 350 Hz. What is the flatcar’s speed in mph? The temperature of the air is [latex] {T}_{\text{C}}=22\text{°}\text{C} [/latex].

A flute plays a note with a frequency of 600 Hz. The flute can be modeled as a pipe open at both ends, where the flute player changes the length with his finger positions. What is the length of the tube if this is the fundamental frequency?

Two sound speakers are separated by a distance d, each sounding a frequency f. An observer stands at one speaker and walks in a straight line a distance x, perpendicular to the the two speakers, until he comes to the first maximum intensity of sound. The speed of sound is v. How far is he from the speaker?

Consider the beats shown below. This is a graph of the gauge pressure versus time for the position [latex] x=0.00\,\text{m}\text{.} [/latex] The wave moves with a speed of [latex] v=343.00\,\text{m/s}\text{.} [/latex] (a) How many beats are there per second? (b) How many times does the wave oscillate per second? (c) Write a wave function for the gauge pressure as a function of time. 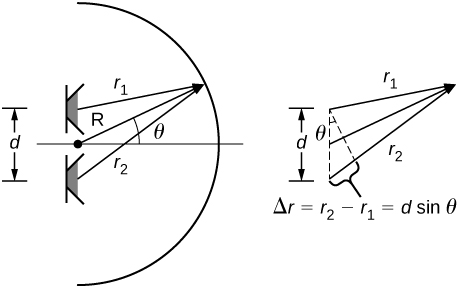