We have thus far considered force as a push or a pull; however, if you think about it, you realize that no push or pull ever occurs by itself. When you push on a wall, the wall pushes back on you. This brings us to Newton’s third law.

Newton’s third law represents a certain symmetry in nature: Forces always occur in pairs, and one body cannot exert a force on another without experiencing a force itself. We sometimes refer to this law loosely as “action-reaction,” where the force exerted is the action and the force experienced as a consequence is the reaction. Newton’s third law has practical uses in analyzing the origin of forces and understanding which forces are external to a system.

Figure 5.16 When the swimmer exerts a force on the wall, she accelerates in the opposite direction; in other words, the net external force on her is in the direction opposite of [latex] {F}_{\text{feet on wall}}. [/latex] This opposition occurs because, in accordance with Newton’s third law, the wall exerts a force [latex] {F}_{\text{wall on feet}} [/latex] on the swimmer that is equal in magnitude but in the direction opposite to the one she exerts on it. The line around the swimmer indicates the system of interest. Thus, the free-body diagram shows only [latex] {F}_{\text{wall on feet}}, [/latex] w (the gravitational force), and BF, which is the buoyant force of the water supporting the swimmer’s weight. The vertical forces w and BF cancel because there is no vertical acceleration.

Other examples of Newton’s third law are easy to find: 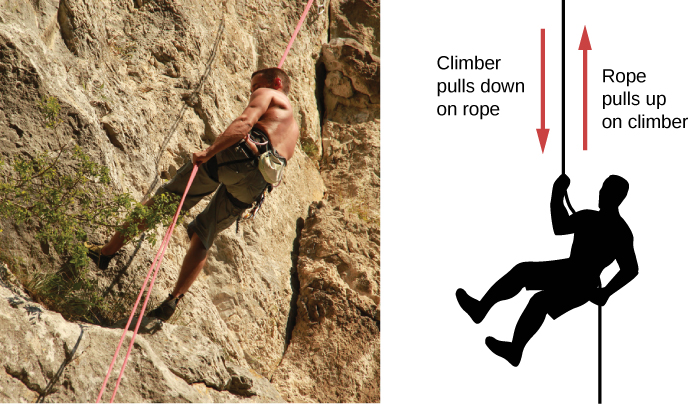 There are two important features of Newton’s third law. First, the forces exerted (the action and reaction) are always equal in magnitude but opposite in direction. Second, these forces are acting on different bodies or systems: A’s force acts on B and B’s force acts on A. In other words, the two forces are distinct forces that do not act on the same body. Thus, they do not cancel each other.

A person who is walking or running applies Newton’s third law instinctively. For example, the runner in (Figure) pushes backward on the ground so that it pushes him forward. 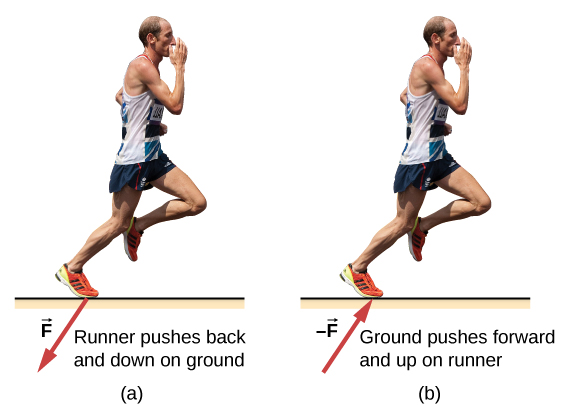 Figure 5.18 The runner experiences Newton’s third law. (a) A force is exerted by the runner on the ground. (b) The reaction force of the ground on the runner pushes him forward.

Forces on a Stationary Object 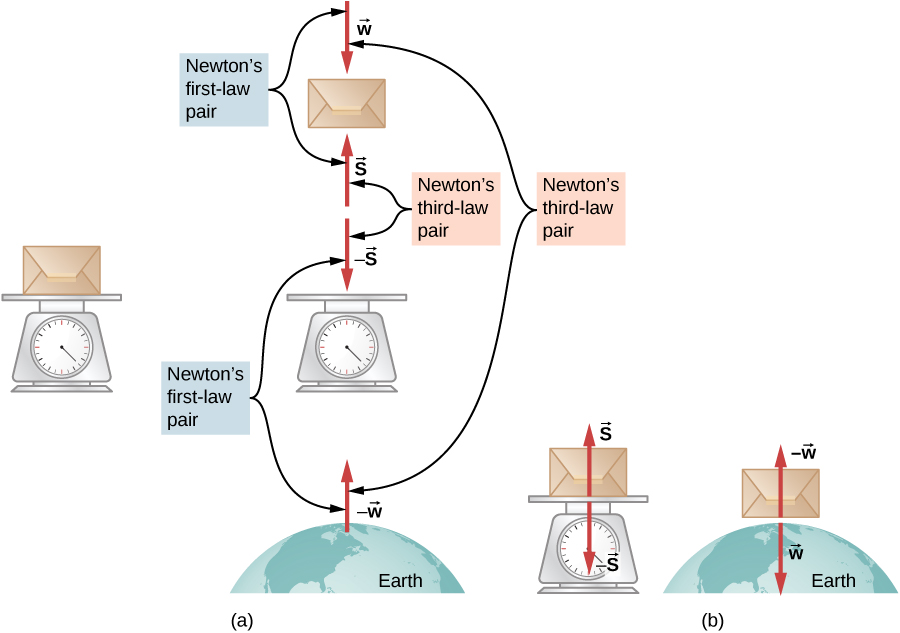 Getting Up to Speed: Choosing the Correct System

A physics professor pushes a cart of demonstration equipment to a lecture hall ((Figure)). Her mass is 65.0 kg, the cart’s mass is 12.0 kg, and the equipment’s mass is 7.0 kg. Calculate the acceleration produced when the professor exerts a backward force of 150 N on the floor. All forces opposing the motion, such as friction on the cart’s wheels and air resistance, total 24.0 N. 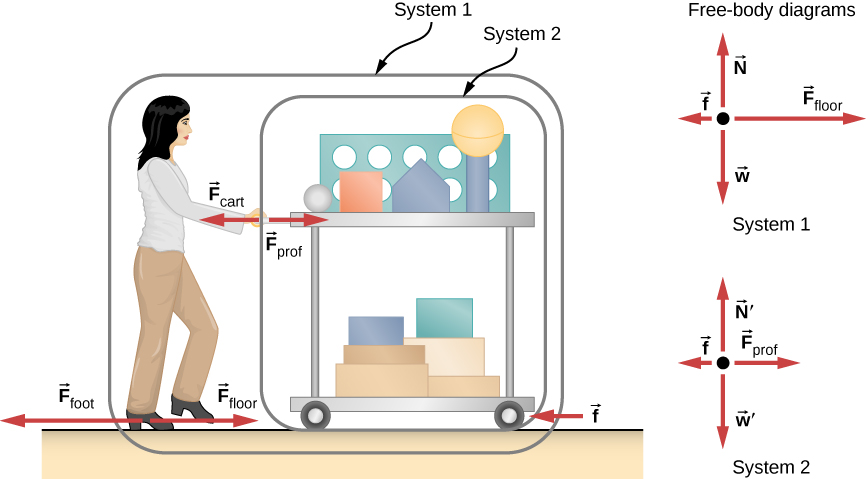 Figure 5.20 A professor pushes the cart with her demonstration equipment. The lengths of the arrows are proportional to the magnitudes of the forces (except for [latex] \overset{\to }{f}\text{,} [/latex] because it is too small to drawn to scale). System 1 is appropriate for this example, because it asks for the acceleration of the entire group of objects. Only [latex] {\overset{\to }{F}}_{\text{floor}} [/latex] and [latex] \overset{\to }{f} [/latex] are external forces acting on System 1 along the line of motion. All other forces either cancel or act on the outside world. System 2 is chosen for the next example so that [latex] {\overset{\to }{F}}_{\text{prof}} [/latex] is an external force and enters into Newton’s second law. The free-body diagrams, which serve as the basis for Newton’s second law, vary with the system chosen.

Newton’s second law is given by

The mass of System 1 is

Force on the Cart: Choosing a New System

Calculate the force the professor exerts on the cart in (Figure), using data from the previous example if needed.

If we define the system of interest as the cart plus the equipment (System 2 in (Figure)), then the net external force on System 2 is the force the professor exerts on the cart minus friction. The force she exerts on the cart, [latex] {F}_{\text{prof}} [/latex], is an external force acting on System 2. [latex] {F}_{\text{prof}} [/latex] was internal to System 1, but it is external to System 2 and thus enters Newton’s second law for this system.

The magnitude of the net external force on System 2 is

The value of f is given, so we must calculate net [latex] {F}_{\text{net}}. [/latex] That can be done because both the acceleration and the mass of System 2 are known. Using Newton’s second law, we see that

Now we can find the desired force:

This force is significantly less than the 150-N force the professor exerted backward on the floor. Not all of that 150-N force is transmitted to the cart; some of it accelerates the professor. The choice of a system is an important analytical step both in solving problems and in thoroughly understanding the physics of the situation (which are not necessarily the same things).

View this video to watch examples of action and reaction.

View this video to watch examples of Newton’s laws and internal and external forces.

Identify the action and reaction forces in the following situations: (a) Earth attracts the Moon, (b) a boy kicks a football, (c) a rocket accelerates upward, (d) a car accelerates forward, (e) a high jumper leaps, and (f) a bullet is shot from a gun.

Suppose that you are holding a cup of coffee in your hand. Identify all forces on the cup and the reaction to each force.

(a) Why does an ordinary rifle recoil (kick backward) when fired? (b) The barrel of a recoilless rifle is open at both ends. Describe how Newton’s third law applies when one is fired. (c) Can you safely stand close behind one when it is fired?

A history book is lying on top of a physics book on a desk, as shown below; a free-body diagram is also shown. The history and physics books weigh 14 N and 18 N, respectively. Identify each force on each book with a double subscript notation (for instance, the contact force of the history book pressing against physics book can be described as [latex] {\overset{\to }{F}}_{\text{HP}} [/latex]), and determine the value of each of these forces, explaining the process used. 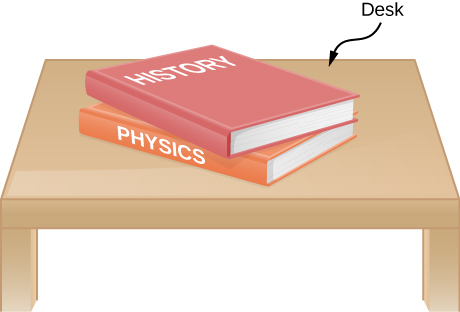 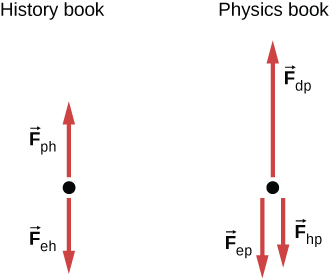 Newton’s third law of motion
whenever one body exerts a force on a second body, the first body experiences a force that is equal in magnitude and opposite in direction to the force that it exerts