5.3 The Cash Budget and Other Specialized Budgets

When cash flows are not periodic, that is, when they are affected by seasonality or a different frequency than the budgetary period, a closer look at cash flow management can be helpful. Although cash flows may be adequate to support expenses for the whole year, there may be timing differences. Cash flows from income may be less frequent than cash flows for expenses, for example, or may be seasonal while expenses are more regular. Most expenses must be paid on a monthly basis, and if some income cash flows occur less frequently or only seasonally, there is a risk of running out of cash in a specific month. For cash flows, timing is everything.

A good management tool is the cash budget, which is a rearrangement of budget items to show each month in detail. Irregular cash flows can be placed in the specific months when they will occur, allowing you to see the effects of cash flow timing more clearly. Mark’s cash budget for 2010 is in the spreadsheet shown in Figure 5.11 “Mark’s Cash Budget”. 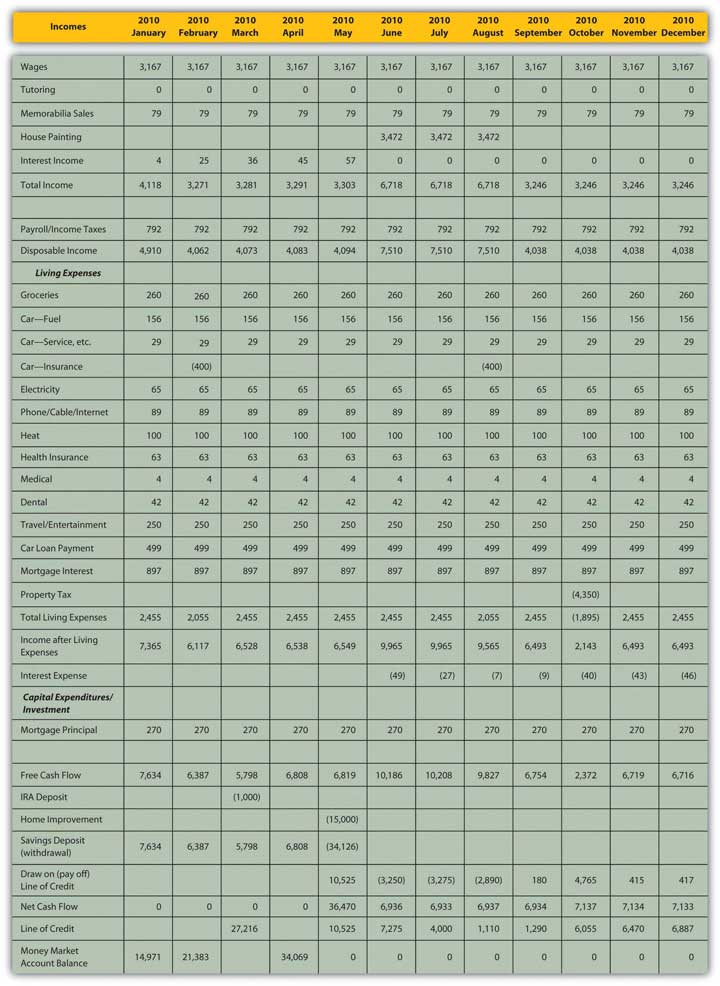 Mark’s original annual budget (Figure 5.8 “Mark’s 2010 Budget”) shows that although his income is enough to cover his living expenses, it does not produce enough cash to support his capital expenditures, specifically, to fix the roof. In fact, his cash flow would fall short by about $6,870, even after he uses the cash from his savings (the money market account). If he must make the capital expenditure this year, he can finance it with a line of credit[1]: a loan where money can be borrowed as needed, up to a limit, and paid down as desired, and interest is paid only on the outstanding balance. Using the line of credit, Mark would create an extra $321 of interest expense for the year.

The cash budget (Figure 5.11 “Mark’s Cash Budget”) shows a more detailed and slightly different story. Because of Mark’s seasonal incomes, if he has the roof fixed in May, he will need to borrow $10,525 in May (before he has income from painting). Then he can pay that balance down until October, when he will need to extend it again to pay his property tax. By the end of the year, his outstanding debt will be a bit more than originally shown, with an ending balance of $6,887. But his total interest expense will be a bit less—only $221—as the loan balance (and therefore the interest expense) will be less in some of the months that he has the loan.

The cash (monthly) budget shows a different story than the annual budget because of the seasonal nature of Mark’s incomes. Since he is planning the capital expenditures before he begins to earn income from painting, he actually has to borrow more—and assume more risk—than originally indicated.

The cash budget may show risks but also remedies that otherwise may not be apparent. In Mark’s case, it is clear that the capital expenditure cannot be financed without some external source of capital, most likely a line of credit. He would have to pay interest on that loan, creating an additional expense. That expense would be in proportion to the amount borrowed and the time it is borrowed for. In his original plan the capital expenditure occurred in May, and Mark would have had to borrow about $10,525, paying interest for the next seven months of the year. Delaying the capital expenditure until October, however, would cost him less, because he would have to borrow less and would be paying interest in fewer months. An alternative cash budget illustrating this scenario is shown in Figure 5.12 “Mark’s Alternative Cash Budget”. 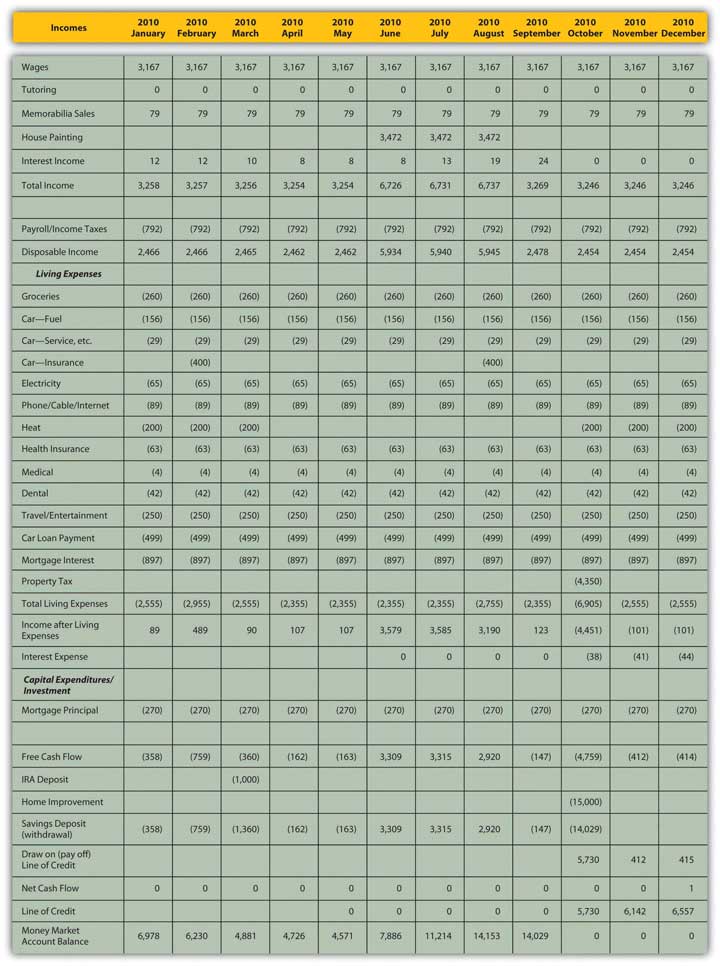 Delaying the capital expenditure until October would also allow the money market account to build value—Mark’s seasonal income would be deposited during the summer—which would finance more of the capital expenditure. He could borrow less, ending the year about $6,557 short, and his interest expense would be only $123, because he has borrowed less and because he can wait until October to borrow, thus paying interest for only three months of the year.

Timing matters for cash flows because you need to get cash before you spend it, but also because time affects value, so it is always better to have liquidity sooner and hang onto it longer. A cash budget provides a much more detailed look at these timing issues, and the risks—and opportunities—of cash management that you may otherwise have missed.

A cash flow budget is a budget that projects a specific aspect of your finances, that is, the cash flows. Other kinds of specialized budgets[2] focus on one particular financial aspect or goal. A specialized budget is ultimately included in the comprehensive budget, as it is a part of total financial activity. It usually reflects one particular activity in more detail, such as the effect of owning and maintaining a particular asset or of pursuing a particular activity. You create a budget for that asset or that activity by segregating its incomes and expenses from your comprehensive budget. It is possible to create such a focused budget only if you can identify and separate its financial activity from the rest of your financial life. If so, you may want to track an activity separately that is directly related to a specific goal.

For example, suppose you decide to take up weekend backpacking as a recreational activity. You are going to try it for two years, and then decide if you want to continue. Aside from assessing the enjoyment that it gives you, you want to be able to assess its impact on your finances. Typically, weekend backpacking requires specialized equipment and clothing, travel to a hiking trail access or campground, and perhaps lodging and meals: capital investment (in the equipment) and then recurring expenses. You may want to create a separate budget for your backpacking investment and expenses in order to assess the value of this new recreational activity.

One common type of specialized budget is a tax budget[3], including activities—incomes, expenses, gains, and losses—that have direct tax consequences. A tax budget can be useful in planning for or anticipating an event that will have significant tax consequences—for example, income from self-employment; the sale of a long-term asset such as a stock portfolio, business, or real estate; or a gift of significant wealth or the settling of an estate.