Bonds are a relatively old form of financing. Formalized debt arrangements long preceded corporate structure and the idea of equity (stock) as we know it. Venice issued the first known government bonds of the modern era in 1157,Isadore Barmash, The Self-Made Man (Washington, DC: Beard Books, 2003), 55. while private bonds are cited in British records going back to the thirteenth century.George Burton Adams, The Constitutional History of England (London: H. Holt, 1921), 93. Venice issued bonds to raise funds to finance a Crusade against Constantinople, which included expansion of a shipyard attached to the Venetian Arsenal. (Go to http://en.wikipedia.org/wiki/Venetian_Arsenal to view images.)

In addition to financing government projects, bonds are used by corporations to capitalize growth. Bonds are also a legal arrangement, couched in conditions, obligations, and consequences. As a result of their legal and financial roles, bonds carry a quaint and particular vocabulary. Bonds come in all shapes and sizes to suit the needs of the borrowers and the demands of lenders. Figure 16.1 “Basic Bond Features” lists the descriptive terms for basic bond features. 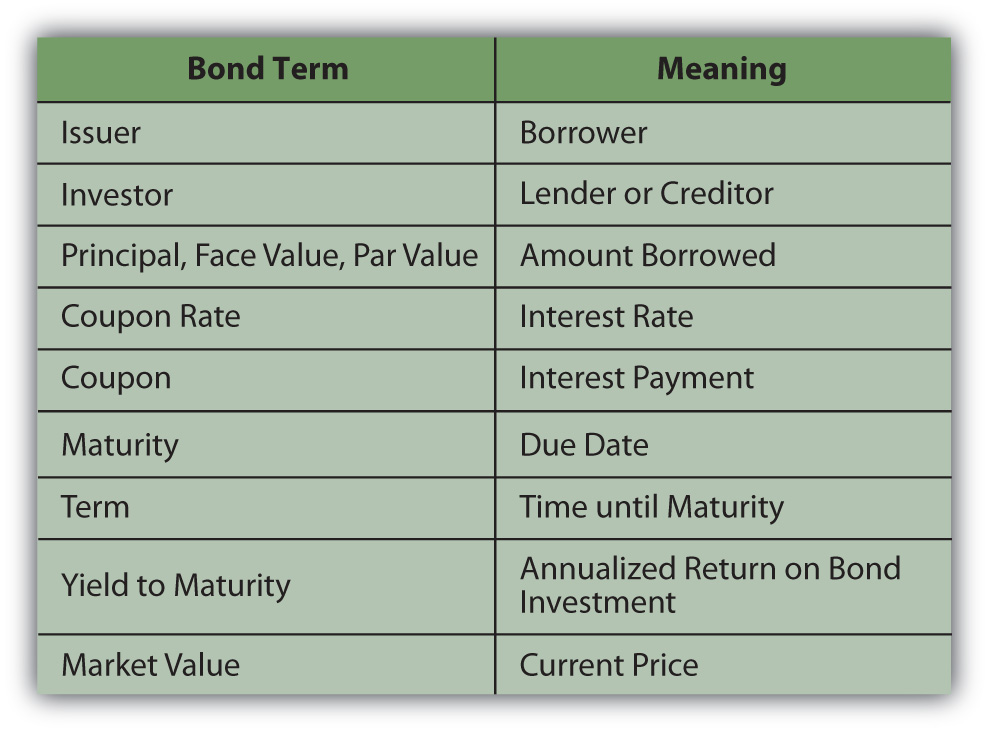 The coupon rate[3] of interest on the bond may be fixed or floating and may change. A floating rate is usually based on another interest benchmark, such as the U.S. prime rate[4], a widely recognized benchmark of prevailing interest rates.

A zero-coupon bond[5] has a coupon rate of zero: it pays no interest and repays only the principal at maturity. A “zero” may be attractive to investors, however, because it can be purchased for much less than its face value. There are deferred coupon bonds[6] (also called split-coupon bonds[7] and issued below par), which pay no interest for a specified period, followed by higher-than-normal interest payments until maturity. There are also step-up bonds[8] that have coupons that increase over time.

The face value, the principal amount borrowed, is paid back at maturity. If the bond is callable[9], it may be redeemed after a specified date but before maturity. A borrower typically “calls” its bonds after prevailing interest rates have fallen, making lower-cost debt available. Borrowers can borrow new, cheaper debt and pay off the older, more expensive debt. As an investor (lender), you would be paid back early, which sounds great, but because interest rates have fallen, you would have trouble finding another bond investment that would pay as high a rate of return.

A convertible bond[10] is a corporate bond that may be converted into common equity at maturity or after some specified time. If a bond were converted into stock, the bondholder would become a shareholder, assuming more of the company’s risk.

The bond may be secured by collateral, such as property or equipment, sometimes called a mortgage bond[11]. If unsecured, or secured only by the “full faith and credit” of the borrower (the borrower’s unconditional commitment to pay principal and interest on the debt), the bond is a debenture[12]. Most bonds are issued as debentures.

A bond specifies if the borrower has more than one bond issue outstanding or more than one set of lenders to repay, which establishes the bond’s seniority in relation to previously issued debt. This “pecking order” determines which lenders will be paid back first in case of default on the debt or bankruptcy. Thus, when the borrower does not meet its coupon obligations, investors holding senior debt[13] as opposed to subordinated debt[14] have less risk of default.

Bonds may also come with covenants[15] or conditions on the borrower. Covenants are usually attached to corporate bonds and require the company to maintain certain performance goals during the term of the loan. Those goals are designed to lower default risk[16] for the lender. Examples of typical covenants are

Corporations issue corporate bonds, usually with maturities of ten, twenty, or thirty years. Corporate bonds tend to be the most “customized,” with features such as callability, conversion, and covenants.

State and municipal governments issue revenue bonds or general obligation bonds. A revenue bond[21] is repaid out of the revenue generated by the project that the debt is financing. For example, toll revenue may secure a debt that finances a highway. A general obligation bond[22] is backed by the state or municipal government, just as a corporate debenture is backed by the corporation.

Interest from state and municipal bonds[23] (also called “munis”) may not be subject to federal income taxes. Also, if you live in that state or municipality, the interest may not be subject to state and local taxes. The tax exemption differs from bond to bond, so you should be sure to check before you invest. Even if the interest is not taxable, however, any gain (or loss) from the sale of the bond is taxed, so you should not think of munis as “tax-free” bonds.

Foreign corporations and governments issue bonds. You should keep in mind, however, that foreign government defaults are not uncommon. Mexico in 1994, Russia in 1998, and Argentina in 2001 are all recent examples. Foreign corporate or sovereign debt also exposes the bondholder to currency risk, as coupons and principal will be paid in the foreign currency. Figure 16.2 “Bond Issuers and Terms” shows a summary of bonds and their issuers.

The volume of capital traded in the bond markets is far greater than what is traded in the stock markets. All sorts of borrowers issue bonds: corporations; national, state and municipal governments; and government agencies. Even small towns issue bonds to finance capital expenditures such as schools, fire stations, and roads. Each kind of bond has its own market.

Private placement[24] refers to bonds that are issued in a private sale rather than through the public markets. The investors in privately placed bonds are institutional investors such as insurance companies, endowments, and pension funds.

U.S. Treasury bonds are issued to the primary market through auctions. Participants, usually dealers or institutional investors, bid for the bonds, but no one participant is allowed to buy enough shares to monopolize the secondary market. Individuals can also buy Treasuries directly from the U.S. Treasury through its online service, called TreasuryDirect (http://www.treasurydirect.gov/).TreasuryDirect, http://www.treasurydirect.gov/ (accessed June 13, 2009).

Corporate bonds are traded in over-the-counter transactions through brokers and dealers. Because the details of each bond issue may vary—maturity, coupon rate, callability, convertibility, covenants, and so on—it is hard to directly compare bond values the way stock values are compared. As a result, the corporate bond markets are less transparent to the individual investor.

To provide guidance, rating agencies[25] provide bond ratings; that is, they “grade” individual bond issues based on the likelihood of default and thus the risk to the investor. Rating agencies are independent agents that base their ratings on the financial stability of the company, its business strategy, competitive environment, outlook for the industry and the economy—any factors that may affect the company’s ability to meet coupon obligations and pay back debt at maturity.

Ratings agencies such as Fitch Ratings, A. M. Best, Moody’s, and Standard & Poor’s (S&P) are hired by large borrowers to analyze the company and rate its debt. Moody’s also rates government debt. Ratings agencies use an alphabetical system to grade bonds (shown in Figure 16.3 “Bond Ratings”) based on the highest-to-lowest rankings of two well-known agencies. 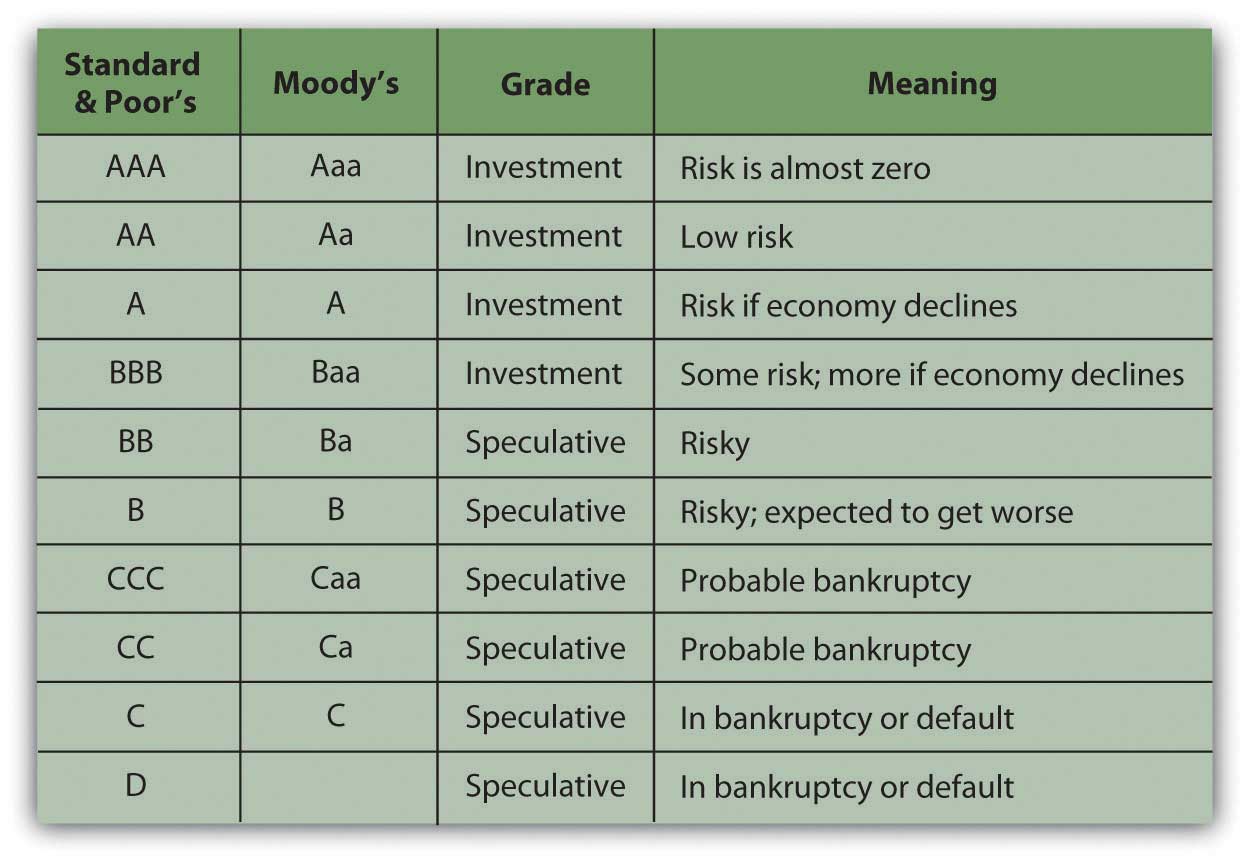 Although the term “junk bonds” sounds derogatory, not all speculative grade bonds are “worthless” or are issued by “bad” companies. Bonds may receive a speculative rating if their issuers are young companies, in a highly competitive market, or capital intensive, requiring lots of operating capital. Any of those features would make it harder for a company to meet its bond obligations and thus may consign its bonds to a speculative rating. In the 1980s, for example, companies such as CNN and MCI Communications Corporation issued high-yield bonds, which became lucrative investments as the companies grew into successful corporations.

Default risk is the risk that a company won’t have enough cash to meet its interest payments and principal payment at maturity. That risk depends, in turn, on the company’s ability to generate cash, profit, and grow to remain competitive. Bond-rating agencies analyze an issuer’s default risk by studying its economic, industry, and firm-specific environments and estimate its current and future ability to satisfy its debts. The default risk analysis is similar to equity analysis, but bondholders are more concerned with cash flows—cash to pay back the bondholders—and profits rather than profits alone.

Bond ratings can determine the coupon rate the issuer must offer investors to compensate them for default risk. The higher the risk, the higher the coupon must be. Ratings agencies have been criticized recently for not being objective enough in their ratings of the corporations that hire them. Nevertheless, over the years bond ratings have proven to be a reliable guide for bond investors.