What drives current? We can think of various devices—such as batteries, generators, wall outlets, and so on—which are necessary to maintain a current. All such devices create a potential difference and are loosely referred to as voltage sources. When a voltage source is connected to a conductor, it applies a potential difference V that creates an electric field. The electric field in turn exerts force on charges, causing current.

This important relationship is known as Ohm’s law. It can be viewed as a cause-and-effect relationship, with voltage the cause and current the effect. This is an empirical law like that for friction—an experimentally observed phenomenon. Such a linear relationship doesn’t always occur.

If voltage drives current, what impedes it? The electric property that impedes current (crudely similar to friction and air resistance) is called resistance R. Collisions of moving charges with atoms and molecules in a substance transfer energy to the substance and limit current. Resistance is defined as inversely proportional to current, or

Thus, for example, current is cut in half if resistance doubles. Combining the relationships of current to voltage and current to resistance gives

This relationship is also called Ohm’s law. Ohm’s law in this form really defines resistance for certain materials. Ohm’s law (like Hooke’s law) is not universally valid. The many substances for which Ohm’s law holds are called ohmic. These include good conductors like copper and aluminum, and some poor conductors under certain circumstances. Ohmic materials have a resistance R that is independent of voltage V and current I. An object that has simple resistance is called a resistor, even if its resistance is small. The unit for resistance is an ohm and is given the symbol Ω (upper case Greek omega). Rearranging I = V/R gives R = V/I, and so the units of resistance are 1 ohm = 1 volt per ampere: 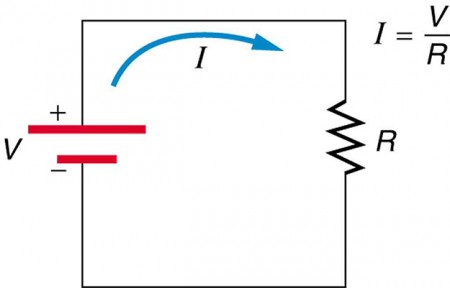 Figure 1. A simple electric circuit in which a closed path for current to flow is supplied by conductors (usually metal wires) connecting a load to the terminals of a battery, represented by the red parallel lines. The zigzag symbol represents the single resistor and includes any resistance in the connections to the voltage source.

What is the resistance of an automobile headlight through which 2.50 A flows when 12.0 V is applied to it?

We can rearrange Ohm’s law as stated by I = V/R and use it to find the resistance.

This is a relatively small resistance, but it is larger than the cold resistance of the headlight. As we shall see in Resistance and Resistivity, resistance usually increases with temperature, and so the bulb has a lower resistance when it is first switched on and will draw considerably more current during its brief warm-up period.

Resistances range over many orders of magnitude. Some ceramic insulators, such as those used to support power lines, have resistances of 1012 Ω or more. A dry person may have a hand-to-foot resistance of 105 Ω, whereas the resistance of the human heart is about 103 Ω. A meter-long piece of large-diameter copper wire may have a resistance of 10−5 Ω, and superconductors have no resistance at all (they are non-ohmic). Resistance is related to the shape of an object and the material of which it is composed, as will be seen in Resistance and Resistivity. Additional insight is gained by solving I = V/R for V, yielding

This expression for V can be interpreted as the voltage drop across a resistor produced by the flow of current I. The phrase IR drop is often used for this voltage. For instance, the headlight in Example 1 above has an IR drop of 12.0 V. If voltage is measured at various points in a circuit, it will be seen to increase at the voltage source and decrease at the resistor. Voltage is similar to fluid pressure. The voltage source is like a pump, creating a pressure difference, causing current—the flow of charge. The resistor is like a pipe that reduces pressure and limits flow because of its resistance. Conservation of energy has important consequences here. The voltage source supplies energy (causing an electric field and a current), and the resistor converts it to another form (such as thermal energy). In a simple circuit (one with a single simple resistor), the voltage supplied by the source equals the voltage drop across the resistor, since PE = qΔV, and the same q flows through each. Thus the energy supplied by the voltage source and the energy converted by the resistor are equal. (See Figure 2.) 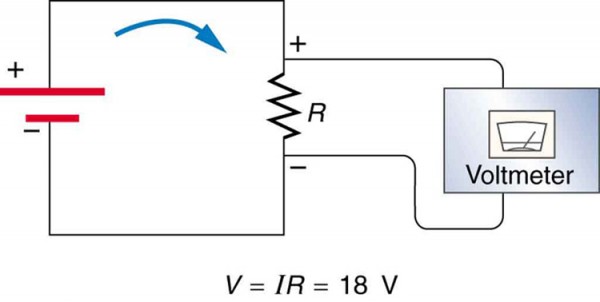 Figure 2. The voltage drop across a resistor in a simple circuit equals the voltage output of the battery.

In a simple electrical circuit, the sole resistor converts energy supplied by the source into another form. Conservation of energy is evidenced here by the fact that all of the energy supplied by the source is converted to another form by the resistor alone. We will find that conservation of energy has other important applications in circuits and is a powerful tool in circuit analysis.

See how the equation form of Ohm’s law relates to a simple circuit. Adjust the voltage and resistance, and see the current change according to Ohm’s law. The sizes of the symbols in the equation change to match the circuit diagram. 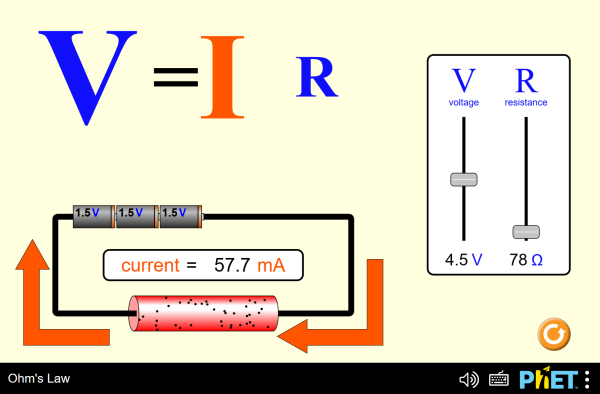 2. Calculate the effective resistance of a pocket calculator that has a 1.35-V battery and through which 0.200 mA flows.

3. What is the effective resistance of a car’s starter motor when 150 A flows through it as the car battery applies 11.0 V to the motor?

4. How many volts are supplied to operate an indicator light on a DVD player that has a resistance of 140 Ω, given that 25.0 mA passes through it?

6. A power transmission line is hung from metal towers with glass insulators having a resistance of 1.00×109 Ω. What current flows through the insulator if the voltage is 200 kV? (Some high-voltage lines are DC.)

Ohm’s law:
an empirical relation stating that the current I is proportional to the potential difference V, ∝ V; it is often written as I = V/R, where R is the resistance

resistance:
the electric property that impedes current; for ohmic materials, it is the ratio of voltage to current, R = V/I

ohmic:
a type of a material for which Ohm’s law is valid

simple circuit:
a circuit with a single voltage source and a single resistor