By the end of this section, you will be able to

Standard measurements of voltage and current alter the circuit being measured, introducing uncertainties in the measurements. Voltmeters draw some extra current, whereas ammeters reduce current flow. Null measurements balance voltages so that there is no current flowing through the measuring device and, therefore, no alteration of the circuit being measured. Null measurements are generally more accurate but are also more complex than the use of standard voltmeters and ammeters, and they still have limits to their precision. In this module, we shall consider a few specific types of null measurements, because they are common and interesting, and they further illuminate principles of electric circuits.

Suppose you wish to measure the emf of a battery. Consider what happens if you connect the battery directly to a standard voltmeter as shown in Figure 1. (Once we note the problems with this measurement, we will examine a null measurement that improves accuracy.) As discussed before, the actual quantity measured is the terminal voltage V, which is related to the emf of the battery by V = emf − Ir, where I is the current that flows and r is the internal resistance of the battery. The emf could be accurately calculated if r were very accurately known, but it is usually not. If the current I could be made zero, then V=emf, and so emf could be directly measured. However, standard voltmeters need a current to operate; thus, another technique is needed. 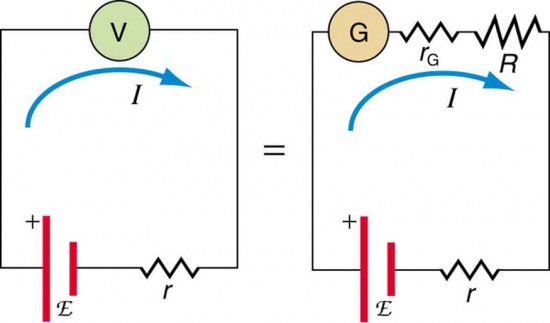 Figure 1. An analog voltmeter attached to a battery draws a small but nonzero current and measures a terminal voltage that differs from the emf of the battery. (Note that the script capital E symbolizes electromotive force, or emf.) Since the internal resistance of the battery is not known precisely, it is not possible to calculate the emf precisely.

A potentiometer is a null measurement device for measuring potentials (voltages). (See Figure 2.) A voltage source is connected to a resistor R, say, a long wire, and passes a constant current through it. There is a steady drop in potential (an IR drop) along the wire, so that a variable potential can be obtained by making contact at varying locations along the wire. Figure 2(b) shows an unknown emfx (represented by script Ex in the figure) connected in series with a galvanometer. Note that emfx opposes the other voltage source. The location of the contact point (see the arrow on the drawing) is adjusted until the galvanometer reads zero. When the galvanometer reads zero, emfx = IRx, where Rx is the resistance of the section of wire up to the contact point. Since no current flows through the galvanometer, none flows through the unknown emf, and so emfx is directly sensed. Now, a very precisely known standard emfs is substituted for emfx, and the contact point is adjusted until the galvanometer again reads zero, so that emfs = IRs. In both cases, no current passes through the galvanometer, and so the current I through the long wire is the same. Upon taking the ratio [latex]\frac{{\text{emf}}_{x}}{{\text{emf}}_{s}}\\[/latex], I cancels, giving 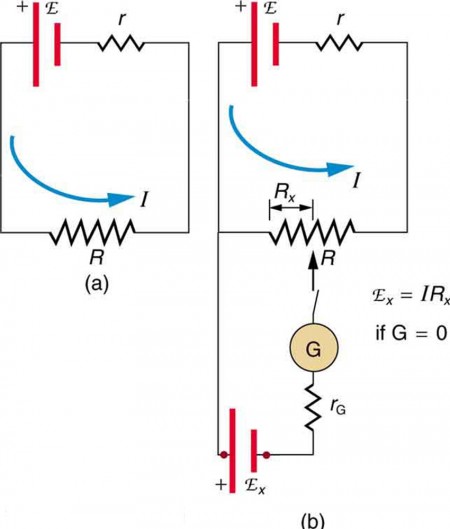 Figure 2. The potentiometer, a null measurement device. (a) A voltage source connected to a long wire resistor passes a constant current I through it. (b) An unknown emf (labeled script Ex in the figure) is connected as shown, and the point of contact along R is adjusted until the galvanometer reads zero. The segment of wire has a resistance Rx and script Ex, where I is unaffected by the connection since no current flows through the galvanometer. The unknown emf is thus proportional to the resistance of the wire segment.

Because a long uniform wire is used for R, the ratio of resistances Rx/Rs is the same as the ratio of the lengths of wire that zero the galvanometer for each emf. The three quantities on the right-hand side of the equation are now known or measured, and emfx can be calculated. The uncertainty in this calculation can be considerably smaller than when using a voltmeter directly, but it is not zero. There is always some uncertainty in the ratio of resistances Rx/Rs and in the standard emfs. Furthermore, it is not possible to tell when the galvanometer reads exactly zero, which introduces error into both Rx and Rs, and may also affect the current I.

Resistance Measurements and the Wheatstone Bridge

There is a variety of so-called ohmmeters that purport to measure resistance. What the most common ohmmeters actually do is to apply a voltage to a resistance, measure the current, and calculate the resistance using Ohm’s law. Their readout is this calculated resistance. Two configurations for ohmmeters using standard voltmeters and ammeters are shown in Figure 3. Such configurations are limited in accuracy, because the meters alter both the voltage applied to the resistor and the current that flows through it. 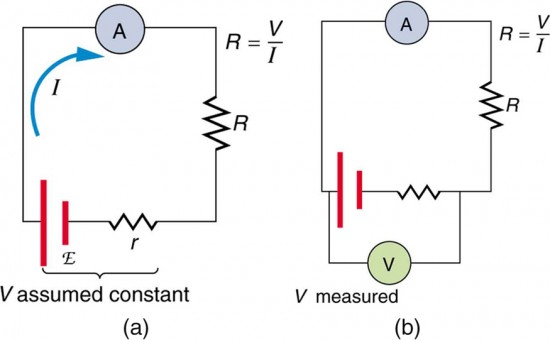 Figure 3. Two methods for measuring resistance with standard meters. (a) Assuming a known voltage for the source, an ammeter measures current, and resistance is calculated as [latex]R=\frac{V}{I}\\[/latex] . (b) Since the terminal voltage V varies with current, it is better to measure it. V is most accurately known when I is small, but I itself is most accurately known when it is large.

The Wheatstone bridge is a null measurement device for calculating resistance by balancing potential drops in a circuit. (See Figure 4.) The device is called a bridge because the galvanometer forms a bridge between two branches. A variety of bridge devices are used to make null measurements in circuits. Resistors R1 and R2 are precisely known, while the arrow through R3 indicates that it is a variable resistance. The value of R3 can be precisely read. With the unknown resistance Rx in the circuit, R3 is adjusted until the galvanometer reads zero. The potential difference between points b and d is then zero, meaning that b and d are at the same potential. With no current running through the galvanometer, it has no effect on the rest of the circuit. So the branches abc and adc are in parallel, and each branch has the full voltage of the source. That is, the IR drops along abc and adc are the same. Since b and d are at the same potential, the IR drop along ad must equal the IR drop along ab.

Taking the ratio of these last two expressions gives

Canceling the currents and solving for Rx yields 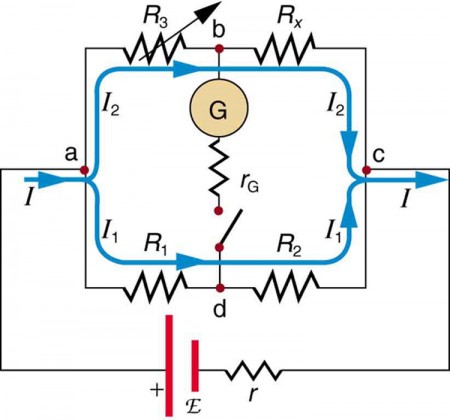 Figure 4. The Wheatstone bridge is used to calculate unknown resistances. The variable resistance R3 is adjusted until the galvanometer reads zero with the switch closed. This simplifies the circuit, allowing Rx to be calculated based on the IR drops as discussed in the text.

This equation is used to calculate the unknown resistance when current through the galvanometer is zero. This method can be very accurate (often to four significant digits), but it is limited by two factors. First, it is not possible to get the current through the galvanometer to be exactly zero. Second, there are always uncertainties in R1, R2, and R3, which contribute to the uncertainty in Rx.

One factor would be resistance in the wires and connections in a null measurement. These are impossible to make zero, and they can change over time. Another factor would be temperature variations in resistance, which can be reduced but not completely eliminated by choice of material. Digital devices sensitive to smaller currents than analog devices do improve the accuracy of null measurements because they allow you to get the current closer to zero.

2. If a potentiometer is used to measure cell emfs on the order of a few volts, why is it most accurate for the standard emfs to be the same order of magnitude and the resistances to be in the range of a few ohms?

2. Calculate the emfx of a dry cell for which a potentiometer is balanced when Rx = 1.200 Ω, while an alkaline standard cell with an emf of 1.600 V requires Rs = 1.247 Ω to balance the potentiometer.

null measurements:
methods of measuring current and voltage more accurately by balancing the circuit so that no current flows through the measurement device

ohmmeter:
an instrument that applies a voltage to a resistance, measures the current, calculates the resistance using Ohm’s law, and provides a readout of this calculated resistance

bridge device:
a device that forms a bridge between two branches of a circuit; some bridge devices are used to make null measurements in circuits

Wheatstone bridge:
a null measurement device for calculating resistance by balancing potential drops in a circuit