Torque on a Current Loop: Motors and Meters

Motors are the most common application of magnetic force on current-carrying wires. Motors have loops of wire in a magnetic field. When current is passed through the loops, the magnetic field exerts torque on the loops, which rotates a shaft. Electrical energy is converted to mechanical work in the process. (See Figure 1.) 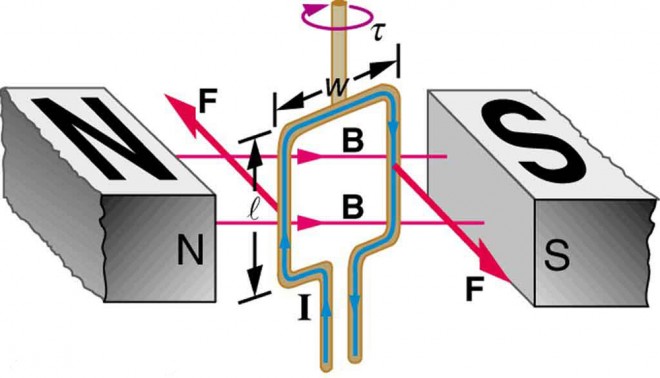 Figure 1. Torque on a current loop. A current-carrying loop of wire attached to a vertically rotating shaft feels magnetic forces that produce a clockwise torque as viewed from above.

Let us examine the force on each segment of the loop in Figure 1 to find the torques produced about the axis of the vertical shaft. (This will lead to a useful equation for the torque on the loop.) We take the magnetic field to be uniform over the rectangular loop, which has width w and height l. First, we note that the forces on the top and bottom segments are vertical and, therefore, parallel to the shaft, producing no torque. Those vertical forces are equal in magnitude and opposite in direction, so that they also produce no net force on the loop. Figure 2 shows views of the loop from above. Torque is defined as τ = rF sin θ, where F is the force, r is the distance from the pivot that the force is applied, and θ is the angle between r and F. As seen in Figure 2(a), right hand rule 1 gives the forces on the sides to be equal in magnitude and opposite in direction, so that the net force is again zero. However, each force produces a clockwise torque. Since r = w/2, the torque on each vertical segment is (w/2)F sin θ, and the two add to give a total torque. 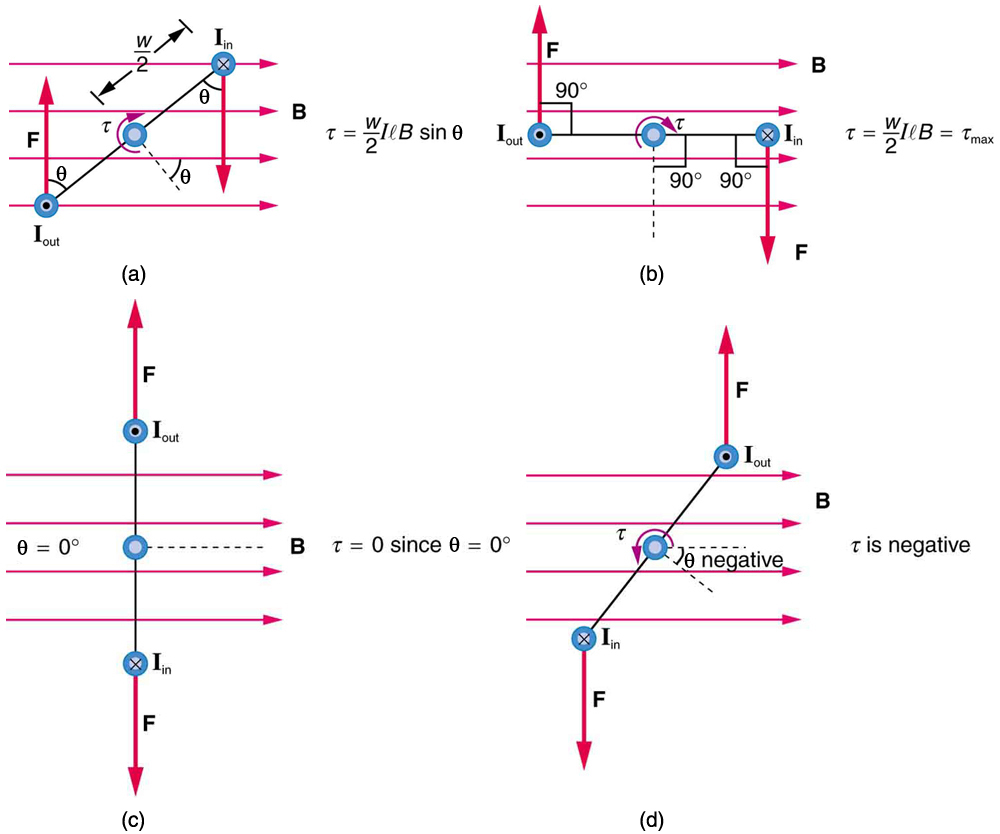 Figure 2. Top views of a current-carrying loop in a magnetic field. (a) The equation for torque is derived using this view. Note that the perpendicular to the loop makes an angle θ with the field that is the same as the angle between w/2 and F. (b) The maximum torque occurs when θ is a right angle and sin θ = 1. (c) Zero (minimum) torque occurs when θ is zero and sin θ = 0. (d) The torque reverses once the loop rotates past θ = 0.

Now, each vertical segment has a length l that is perpendicular to B, so that the force on each is [latex]F=IlB\\[/latex]. Entering F into the expression for torque yields

If we have a multiple loop of N turns, we get N times the torque of one loop. Finally, note that the area of the loop is A = wl; the expression for the torque becomes

This is the torque on a current-carrying loop in a uniform magnetic field. This equation can be shown to be valid for a loop of any shape. The loop carries a current I, has N turns, each of area A, and the perpendicular to the loop makes an angle θ with the field B. The net force on the loop is zero.

Example 1. Calculating Torque on a Current-Carrying Loop in a Strong Magnetic Field

This torque is large enough to be useful in a motor.

The torque found in the preceding example is the maximum. As the coil rotates, the torque decreases to zero at θ = 0. The torque then reverses its direction once the coil rotates past θ = 0. (See Figure 2(d).) This means that, unless we do something, the coil will oscillate back and forth about equilibrium at θ = 0. To get the coil to continue rotating in the same direction, we can reverse the current as it passes through θ = 0 with automatic switches called brushes. (See Figure 3.) 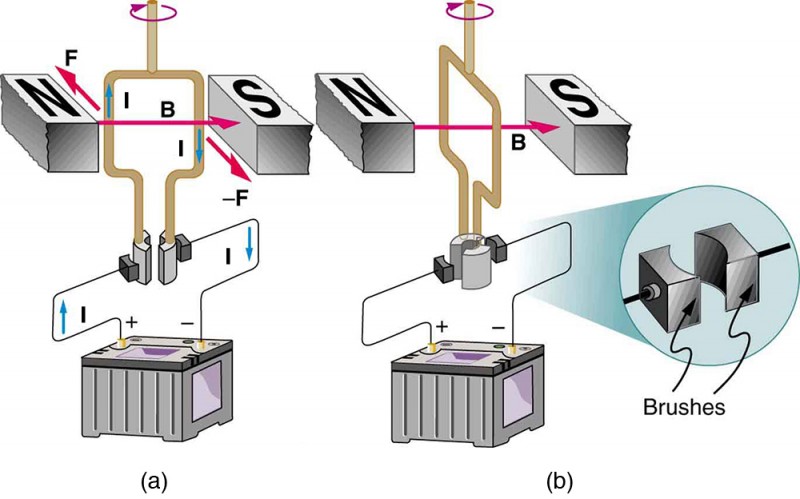 Figure 3. (a) As the angular momentum of the coil carries it through θ = 0, the brushes reverse the current to keep the torque clockwise. (b) The coil will rotate continuously in the clockwise direction, with the current reversing each half revolution to maintain the clockwise torque.

Meters, such as those in analog fuel gauges on a car, are another common application of magnetic torque on a current-carrying loop. Figure 4 shows that a meter is very similar in construction to a motor. The meter in the figure has its magnets shaped to limit the effect of θ by making B perpendicular to the loop over a large angular range. Thus the torque is proportional to I and not θ. A linear spring exerts a counter-torque that balances the current-produced torque. This makes the needle deflection proportional to I. If an exact proportionality cannot be achieved, the gauge reading can be calibrated. To produce a galvanometer for use in analog voltmeters and ammeters that have a low resistance and respond to small currents, we use a large loop area A, high magnetic field B, and low-resistance coils. 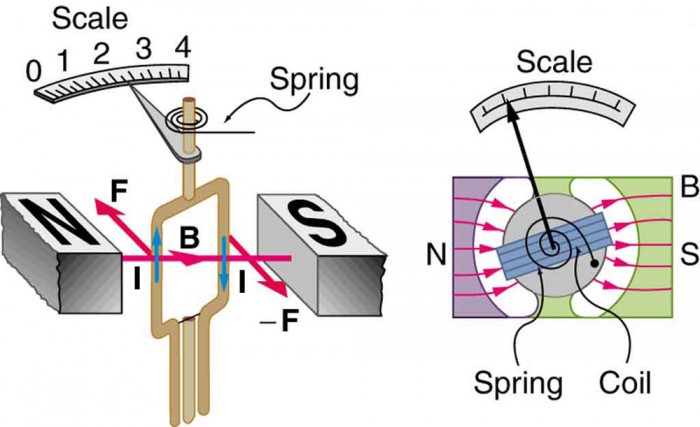 Figure 4. Meters are very similar to motors but only rotate through a part of a revolution. The magnetic poles of this meter are shaped to keep the component of B perpendicular to the loop constant, so that the torque does not depend on θ and the deflection against the return spring is proportional only to the current I.

1. Draw a diagram and use RHR-1 to show that the forces on the top and bottom segments of the motor’s current loop in Figure 1 are vertical and produce no torque about the axis of rotation.

1. (a) By how many percent is the torque of a motor decreased if its permanent magnets lose 5.0% of their strength? (b) How many percent would the current need to be increased to return the torque to original values?

5. Since the equation for torque on a current-carrying loop is [latex]\tau =NIAB\sin\theta\\[/latex], the units of N ⋅ m must equal units of A ⋅ m2 T. Verify this.

8. (a) A 200-turn circular loop of radius 50.0 cm is vertical, with its axis on an east-west line. A current of 100 A circulates clockwise in the loop when viewed from the east. The Earth’s field here is due north, parallel to the ground, with a strength of 3.00 × 10−5 T. What are the direction and magnitude of the torque on the loop? (b) Does this device have any practical applications as a motor?

motor:
loop of wire in a magnetic field; when current is passed through the loops, the magnetic field exerts torque on the loops, which rotates a shaft; electrical energy is converted to mechanical work in the process

meter:
common application of magnetic torque on a current-carrying loop that is very similar in construction to a motor; by design, the torque is proportional to I and not θ, so the needle deflection is proportional to the current