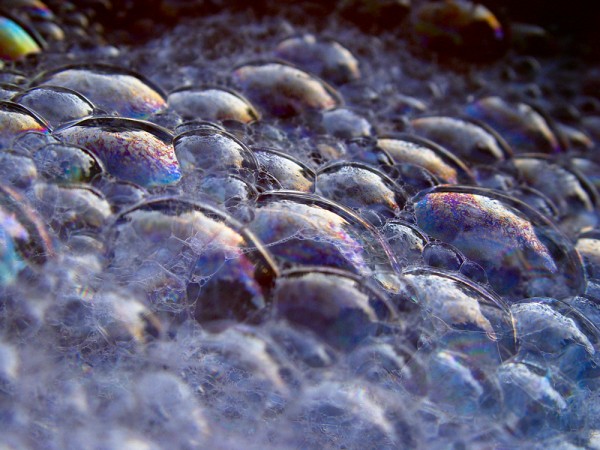 The bright colors seen in an oil slick floating on water or in a sunlit soap bubble are caused by interference. The brightest colors are those that interfere constructively. This interference is between light reflected from different surfaces of a thin film; thus, the effect is known as thin film interference. As noticed before, interference effects are most prominent when light interacts with something having a size similar to its wavelength. A thin film is one having a thickness t smaller than a few times the wavelength of light, λ. Since color is associated indirectly with λ and since all interference depends in some way on the ratio of λ to the size of the object involved, we should expect to see different colors for different thicknesses of a film, as in Figure 1. 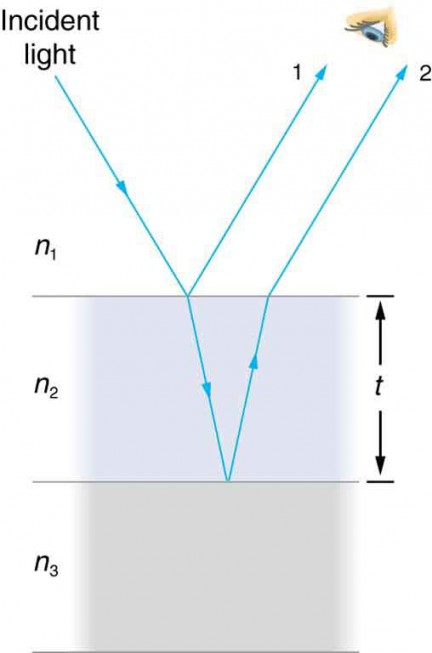 When light reflects from a medium having an index of refraction greater than that of the medium in which it is traveling, a 180º phase change (or a λ / 2 shift) occurs.

If the film in Figure 2 is a soap bubble (essentially water with air on both sides), then there is a λ/2 shift for ray 1 and none for ray 2. Thus, when the film is very thin, the path length difference between the two rays is negligible, they are exactly out of phase, and destructive interference will occur at all wavelengths and so the soap bubble will be dark here.

The thickness of the film relative to the wavelength of light is the other crucial factor in thin film interference. Ray 2 in Figure 2 travels a greater distance than ray 1. For light incident perpendicular to the surface, ray 2 travels a distance approximately 2t farther than ray 1. When this distance is an integral or half-integral multiple of the wavelength in the medium (λn = λ/n, where λ is the wavelength in vacuum and n is the index of refraction), constructive or destructive interference occurs, depending also on whether there is a phase change in either ray.

Sophisticated cameras use a series of several lenses. Light can reflect from the surfaces of these various lenses and degrade image clarity. To limit these reflections, lenses are coated with a thin layer of magnesium fluoride that causes destructive thin film interference. What is the thinnest this film can be, if its index of refraction is 1.38 and it is designed to limit the reflection of 550-nm light, normally the most intense visible wavelength? The index of refraction of glass is 1.52.

Refer to Figure 2 and use n1=100 for air, n2 = 1.38, and n3 = 1.52. Both ray 1 and ray 2 will have a λ/2 shift upon reflection. Thus, to obtain destructive interference, ray 2 will need to travel a half wavelength farther than ray 1. For rays incident perpendicularly, the path length difference is 2t.

Films such as the one in this example are most effective in producing destructive interference when the thinnest layer is used, since light over a broader range of incident angles will be reduced in intensity. These films are called non-reflective coatings; this is only an approximately correct description, though, since other wavelengths will only be partially cancelled. Non-reflective coatings are used in car windows and sunglasses.

To know whether interference is constructive or destructive, you must also determine if there is a phase change upon reflection. Thin film interference thus depends on film thickness, the wavelength of light, and the refractive indices. For white light incident on a film that varies in thickness, you will observe rainbow colors of constructive interference for various wavelengths as the thickness varies.

Example 2. Soap Bubbles: More Than One Thickness can be Constructive

Use Figure 2 to visualize the bubble. Note that n1 = n3 = 1.00 for air, and n2 = 1.333 for soap (equivalent to water). There is a [latex]\frac{\lambda}{2}\\[/latex] shift for ray 1 reflected from the top surface of the bubble, and no shift for ray 2 reflected from the bottom surface. To get constructive interference, then, the path length difference (2t) must be a half-integral multiple of the wavelength—the first three being[latex]\frac{\lambda_{n}}{2},\frac{3\lambda_{n}}{2}\text{, and }\frac{5\lambda_{n}}{2}\\[/latex]. To get destructive interference, the path length difference must be an integral multiple of the wavelength—the first three being 0, λn, and 2λn.

For destructive interference, the path length difference here is an integral multiple of the wavelength. The first occurs for zero thickness, since there is a phase change at the top surface. That is, td = 0.

Finally, the third destructive thickness is 2t′′d=2λn, so that

Another example of thin film interference can be seen when microscope slides are separated (see Figure 3). The slides are very flat, so that the wedge of air between them increases in thickness very uniformly. A phase change occurs at the second surface but not the first, and so there is a dark band where the slides touch. The rainbow colors of constructive interference repeat, going from violet to red again and again as the distance between the slides increases. As the layer of air increases, the bands become more difficult to see, because slight changes in incident angle have greater effects on path length differences. If pure-wavelength light instead of white light is used, then bright and dark bands are obtained rather than repeating rainbow colors.

Figure 3. (a) The rainbow color bands are produced by thin film interference in the air between the two glass slides. (b) Schematic of the paths taken by rays in the wedge of air between the slides. 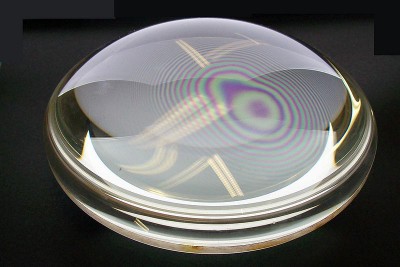 Figure 4. “Newton’s rings” interference fringes are produced when two plano-convex lenses are placed together with their plane surfaces in contact. The rings are created by interference between the light reflected off the two surfaces as a result of a slight gap between them, indicating that these surfaces are not precisely plane but are slightly convex. (credit: Ulf Seifert, Wikimedia Commons)

An important application of thin film interference is found in the manufacturing of optical instruments. A lens or mirror can be compared with a master as it is being ground, allowing it to be shaped to an accuracy of less than a wavelength over its entire surface. Figure 4 illustrates the phenomenon called Newton’s rings, which occurs when the plane surfaces of two lenses are placed together. (The circular bands are called Newton’s rings because Isaac Newton described them and their use in detail. Newton did not discover them; Robert Hooke did, and Newton did not believe they were due to the wave character of light.) Each successive ring of a given color indicates an increase of only one wavelength in the distance between the lens and the blank, so that great precision can be obtained. Once the lens is perfect, there will be no rings.

One feature of thin film interference and diffraction gratings is that the pattern shifts as you change the angle at which you look or move your head. Find examples of thin film interference and gratings around you. Explain how the patterns change for each specific example. Find examples where the thickness changes giving rise to changing colors. If you can find two microscope slides, then try observing the effect shown in Figure 3. Try separating one end of the two slides with a hair or maybe a thin piece of paper and observe the effect.

Step 1. Examine the situation to determine that interference is involved. Identify whether slits or thin film interference are considered in the problem.

Step 2. If slits are involved, note that diffraction gratings and double slits produce very similar interference patterns, but that gratings have narrower (sharper) maxima. Single slit patterns are characterized by a large central maximum and smaller maxima to the sides.

Step 3. If thin film interference is involved, take note of the path length difference between the two rays that interfere. Be certain to use the wavelength in the medium involved, since it differs from the wavelength in vacuum. Note also that there is an additional λ/2 phase shift when light reflects from a medium with a greater index of refraction.

Step 4. Identify exactly what needs to be determined in the problem (identify the unknowns). A written list is useful. Draw a diagram of the situation. Labeling the diagram is useful.

Step 5. Make a list of what is given or can be inferred from the problem as stated (identify the knowns).

Step 6. Solve the appropriate equation for the quantity to be determined (the unknown), and enter the knowns. Slits, gratings, and the Rayleigh limit involve equations.

Step 8. Check to see if the answer is reasonable: Does it make sense? Angles in interference patterns cannot be greater than 90º, for example.

13. The oil film will appear black, since the reflected light is not in the visible part of the spectrum.