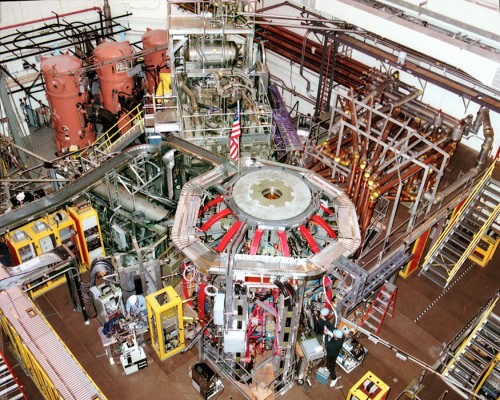 Figure 1. The National Spherical Torus Experiment (NSTX) has a fusion reactor in which hydrogen isotopes undergo fusion to produce helium. In this process, a relatively small mass of fuel is converted into a large amount of energy. (credit: Princeton Plasma Physics Laboratory)

Conservation of energy is one of the most important laws in physics. Not only does energy have many important forms, but each form can be converted to any other. We know that classically the total amount of energy in a system remains constant. Relativistically, energy is still conserved, provided its definition is altered to include the possibility of mass changing to energy, as in the reactions that occur within a nuclear reactor. Relativistic energy is intentionally defined so that it will be conserved in all inertial frames, just as is the case for relativistic momentum. As a consequence, we learn that several fundamental quantities are related in ways not known in classical physics. All of these relationships are verified by experiment and have fundamental consequences. The altered definition of energy contains some of the most fundamental and spectacular new insights into nature found in recent history.

The first postulate of relativity states that the laws of physics are the same in all inertial frames. Einstein showed that the law of conservation of energy is valid relativistically, if we define energy to include a relativistic factor.

Total energy E is defined to be E = γmc2, where m is mass, c is the speed of light,

and v is the velocity of the mass relative to an observer. There are many aspects of the total energy E that we will discuss—among them are how kinetic and potential energies are included in E, and how E is related to relativistic momentum. But first, note that at rest, total energy is not zero. Rather, when v = 0, we have γ = 1, and an object has rest energy.

This is the correct form of Einstein’s most famous equation, which for the first time showed that energy is related to the mass of an object at rest. For example, if energy is stored in the object, its rest mass increases. This also implies that mass can be destroyed to release energy. The implications of these first two equations regarding relativistic energy are so broad that they were not completely recognized for some years after Einstein published them in 1907, nor was the experimental proof that they are correct widely recognized at first. Einstein, it should be noted, did understand and describe the meanings and implications of his theory.

One gram is a small mass—less than half the mass of a penny. We can multiply this mass, in SI units, by the speed of light squared to find the equivalent rest energy.

This is an enormous amount of energy for a 1.00-g mass. We do not notice this energy, because it is generally not available. Rest energy is large because the speed of light c is a large number and c2 is a very large number, so that mc2 is huge for any macroscopic mass. The 9.00 × 1013 J rest mass energy for 1.00 g is about twice the energy released by the Hiroshima atomic bomb and about 10,000 times the kinetic energy of a large aircraft carrier. If a way can be found to convert rest mass energy into some other form (and all forms of energy can be converted into one another), then huge amounts of energy can be obtained from the destruction of mass.

Today, the practical applications of the conversion of mass into another form of energy, such as in nuclear weapons and nuclear power plants, are well known. But examples also existed when Einstein first proposed the correct form of relativistic energy, and he did describe some of them. Nuclear radiation had been discovered in the previous decade, and it had been a mystery as to where its energy originated. The explanation was that, in certain nuclear processes, a small amount of mass is destroyed and energy is released and carried by nuclear radiation. But the amount of mass destroyed is so small that it is difficult to detect that any is missing. Although Einstein proposed this as the source of energy in the radioactive salts then being studied, it was many years before there was broad recognition that mass could be and, in fact, commonly is converted to energy. (See Figure 2.)

Figure 2. The Sun (a) and the Susquehanna Steam Electric Station (b) both convert mass into energy—the Sun via nuclear fusion, the electric station via nuclear fission. (credits: (a) NASA/Goddard Space Flight Center, Scientific Visualization Studio; (b) U.S. government)

Because of the relationship of rest energy to mass, we now consider mass to be a form of energy rather than something separate. There had not even been a hint of this prior to Einstein’s work. Such conversion is now known to be the source of the Sun’s energy, the energy of nuclear decay, and even the source of energy keeping Earth’s interior hot.

What happens to energy stored in an object at rest, such as the energy put into a battery by charging it, or the energy stored in a toy gun’s compressed spring? The energy input becomes part of the total energy of the object and, thus, increases its rest mass. All stored and potential energy becomes mass in a system. Why is it we don’t ordinarily notice this? In fact, conservation of mass (meaning total mass is constant) was one of the great laws verified by 19th-century science. Why was it not noticed to be incorrect? Example 2 helps answer these questions.

In Part 1, we first must find the energy stored in the battery, which equals what the battery can supply in the form of electrical potential energy. Since PEelec = qV, we have to calculate the charge q in 600 A · h, which is the product of the current I and the time t. We then multiply the result by 12.0 V. We can then calculate the battery’s increase in mass using ΔE = PEelec = (Δm)c2. Part 2 is a simple ratio converted to a percentage.

Write amperes A as coulombs per second (C/s), and convert hours to seconds.

Both the actual increase in mass and the percent increase are very small, since energy is divided by c2, a very large number. We would have to be able to measure the mass of the battery to a precision of a billionth of a percent, or 1 part in 1011, to notice this increase. It is no wonder that the mass variation is not readily observed. In fact, this change in mass is so small that we may question how you could verify it is real. The answer is found in nuclear processes in which the percentage of mass destroyed is large enough to be measured. The mass of the fuel of a nuclear reactor, for example, is measurably smaller when its energy has been used. In that case, stored energy has been released (converted mostly to heat and electricity) and the rest mass has decreased. This is also the case when you use the energy stored in a battery, except that the stored energy is much greater in nuclear processes, making the change in mass measurable in practice as well as in theory.

Relativistically, we have Wnet = KErel.

When motionless, we have v = 0 and

so that KErel = 0 at rest, as expected. But the expression for relativistic kinetic energy (such as total energy and rest energy) does not look much like the classical [latex]\frac{1}{2}mv^2\\[/latex]. To show that the classical expression for kinetic energy is obtained at low velocities, we note that the binomial expansion for γ at low velocities gives

A binomial expansion is a way of expressing an algebraic quantity as a sum of an infinite series of terms. In some cases, as in the limit of small velocity here, most terms are very small. Thus the expression derived for γ here is not exact, but it is a very accurate approximation. Thus, at low velocities,

Entering this into the expression for relativistic kinetic energy gives 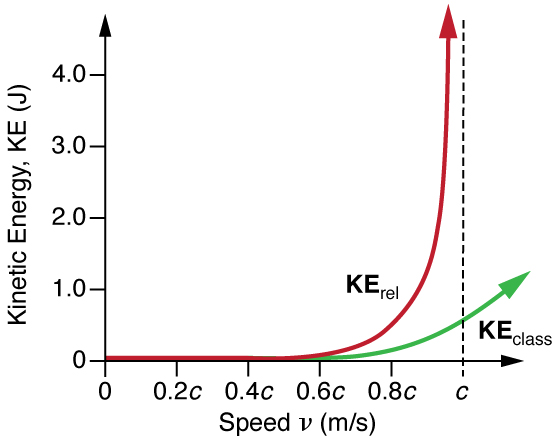 The Speed of Light

No object with mass can attain the speed of light.

So the speed of light is the ultimate speed limit for any particle having mass. All of this is consistent with the fact that velocities less than c always add to less than c. Both the relativistic form for kinetic energy and the ultimate speed limit being c have been confirmed in detail in numerous experiments. No matter how much energy is put into accelerating a mass, its velocity can only approach—not reach—the speed of light.

Plug the knowns into the equation.First calculate γ. We will carry extra digits because this is an intermediate calculation.

Next, we use this value to calculate the kinetic energy.

As might be expected, since the velocity is 99.0% of the speed of light, the classical kinetic energy is significantly off from the correct relativistic value. Note also that the classical value is much smaller than the relativistic value. In fact, [latex]\frac{\text{KE}_{\text{rel}}}{\text{KE}_{\text{class}}}=12.4\\[/latex] here. This is some indication of how difficult it is to get a mass moving close to the speed of light. Much more energy is required than predicted classically. 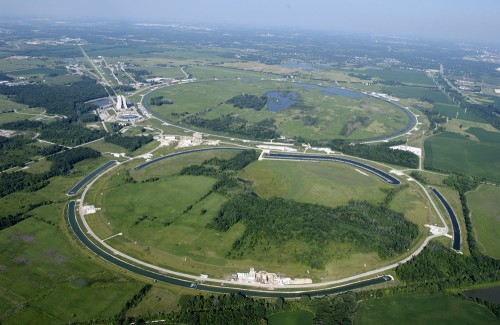 Figure 4. The Fermi National Accelerator Laboratory, near Batavia, Illinois, was a subatomic particle collider that accelerated protons and antiprotons to attain energies up to 1 Tev (a trillion electronvolts). The circular ponds near the rings were built to dissipate waste heat. This accelerator was shut down in September 2011. (credit: Fermilab, Reidar Hahn)

Some people interpret this extra energy as going into increasing the mass of the system, but, as discussed in Relativistic Momentum, this cannot be verified unambiguously. What is certain is that ever-increasing amounts of energy are needed to get the velocity of a mass a little closer to that of light. An energy of 3 MeV is a very small amount for an electron, and it can be achieved with present-day particle accelerators. SLAC, for example, can accelerate electrons to over 50 × 109 eV = 50,000 MeV.

Is there any point in getting v a little closer to c than 99.0% or 99.9%? The answer is yes. We learn a great deal by doing this. The energy that goes into a high-velocity mass can be converted to any other form, including into entirely new masses. (See Figure 4.) Most of what we know about the substructure of matter and the collection of exotic short-lived particles in nature has been learned this way. Particles are accelerated to extremely relativistic energies and made to collide with other particles, producing totally new species of particles. Patterns in the characteristics of these previously unknown particles hint at a basic substructure for all matter. These particles and some of their characteristics will be covered in Particle Physics.

We know classically that kinetic energy and momentum are related to each other, since

If we consider momentum p to be distinct from mass, we can determine the implications of the equation E2 = (pc)2 + (mc2)2, for a particle that has no mass. If we take m to be zero in this equation, then [latex]E=pc\text{, or }p=\frac{E}{c}\\[/latex]. Massless particles have this momentum. There are several massless particles found in nature, including photons (these are quanta of electromagnetic radiation). Another implication is that a massless particle must travel at speed c and only at speed c. While it is beyond the scope of this text to examine the relationship in the equation E2 = (pc)2 + (mc2)2, in detail, we can see that the relationship has important implications in special relativity.

A photon decays into an electron-positron pair. What is the kinetic energy of the electron if its speed is 0.992c?

The ratio is greater for hydrogen.