Physical characteristics that are quantized—such as energy, charge, and angular momentum—are of such importance that names and symbols are given to them. The values of quantized entities are expressed in terms of quantum numbers, and the rules governing them are of the utmost importance in determining what nature is and does. This section covers some of the more important quantum numbers and rules—all of which apply in chemistry, material science, and far beyond the realm of atomic physics, where they were first discovered. Once again, we see how physics makes discoveries which enable other fields to grow.

The energy states of bound systems are quantized, because the particle wavelength can fit into the bounds of the system in only certain ways. This was elaborated for the hydrogen atom, for which the allowed energies are expressed as En∝1/n2, where n = 1, 2, 3, …. We define n to be the principal quantum number that labels the basic states of a system. The lowest-energy state has n = 1, the first excited state has n=2, and so on. Thus the allowed values for the principal quantum number are n = 1, 2, 3, …. This is more than just a numbering scheme, since the energy of the system, such as the hydrogen atom, can be expressed as some function of n, as can other characteristics (such as the orbital radii of the hydrogen atom). 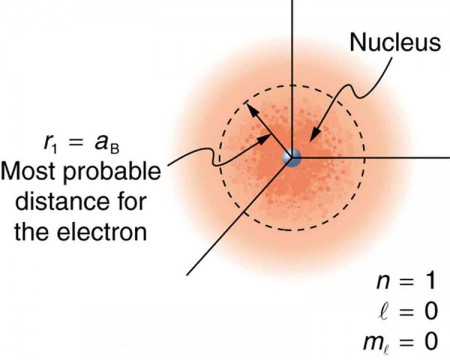 Figure 1. The ground state of a hydrogen atom has a probability cloud describing the position of its electron. The probability of finding the electron is proportional to the darkness of the cloud. The electron can be closer or farther than the Bohr radius, but it is very unlikely to be a great distance from the nucleus.

Note that for n = 1, l can only be zero. This means that the ground-state angular momentum for hydrogen is actually zero, not [latex]\frac{h}{2\pi}\\[/latex] as Bohr proposed. The picture of circular orbits is not valid, because there would be angular momentum for any circular orbit. A more valid picture is the cloud of probability shown for the ground state of hydrogen in Figure 1. The electron actually spends time in and near the nucleus. The reason the electron does not remain in the nucleus is related to Heisenberg’s uncertainty principle—the electron’s energy would have to be much too large to be confined to the small space of the nucleus. Now the first excited state of hydrogen has n=2, so that l can be either 0 or 1, according to the rule in [latex]L=\sqrt{l\left(l+1\right)}\frac{h}{2\pi}\\[/latex]. Similarly, for n=3, l can be 0, 1, or 2. It is often most convenient to state the value of l, a simple integer, rather than calculating the value of L from [latex]L=\sqrt{l\left(l+1\right)}\frac{h}{2\pi}\\[/latex]. For example, for l = 2, we see that

As recognized in the Zeeman effect, the direction of angular momentum is quantized. We now know this is true in all circumstances. It is found that the component of angular momentum along one direction in space, usually called the z-axis, can have only certain values of Lz. The direction in space must be related to something physical, such as the direction of the magnetic field at that location. This is an aspect of relativity. Direction has no meaning if there is nothing that varies with direction, as does magnetic force. The allowed values of Lz are 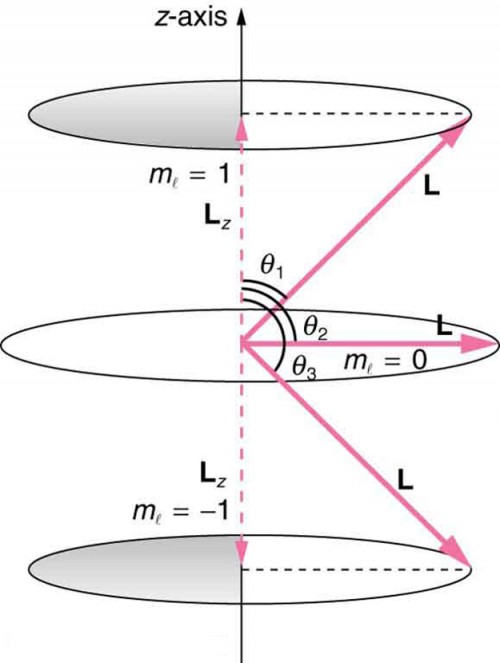 Example 1. What Are the Allowed Directions?

Calculate the angles that the angular momentum vector L can make with the z-axis for l = 1, as illustrated in Figure 2.

Figure 2 represents the vectors L and Lz as usual, with arrows proportional to their magnitudes and pointing in the correct directions. L and Lz form a right triangle, with L being the hypotenuse and Lz the adjacent side. This means that the ratio of Lz to L is the cosine of the angle of interest. We can find L and Lz using [latex]L=\sqrt{l\left(l+1\right)}\frac{h}{2\pi}\\[/latex] and  [latex]L_z=m\frac{h}{2\pi}\\[/latex].

The angles are consistent with the figure. Only the angle relative to the z-axis is quantized. L can point in any direction as long as it makes the proper angle with the z-axis. Thus the angular momentum vectors lie on cones as illustrated. This behavior is not observed on the large scale. To see how the correspondence principle holds here, consider that the smallest angle ( θ1 in the example) is for the maximum value of ml = 0, namely ml = l. For that smallest angle,

which approaches 1 as l becomes very large. If cos θ = 1, then θ = 0º. Furthermore, for large l, there are many values of ml, so that all angles become possible as l gets very large.

Intrinsic Spin Angular Momentum Is Quantized in Magnitude and Direction

There are two more quantum numbers of immediate concern. Both were first discovered for electrons in conjunction with fine structure in atomic spectra. It is now well established that electrons and other fundamental particles have intrinsic spin, roughly analogous to a planet spinning on its axis. This spin is a fundamental characteristic of particles, and only one magnitude of intrinsic spin is allowed for a given type of particle. Intrinsic angular momentum is quantized independently of orbital angular momentum. Additionally, the direction of the spin is also quantized. It has been found that the magnitude of the intrinsic (internal) spin angular momentum, S, of an electron is given by

where s is defined to be the spin quantum number. This is very similar to the quantization of L given in [latex]L=\sqrt{l\left(l+1\right)}\frac{h}{2\pi}\\[/latex], except that the only value allowed for s for electrons is 1/2.

for electrons. Sz is the z-component of spin angular momentum and ms is the spin projection quantum number. For electrons, s can only be 1/2, and ms can be either +1/2 or –1/2. Spin projection ms = +1/2 is referred to as spin up, whereas ms = −1/2 is called spin down. These are illustrated in Figure 3. 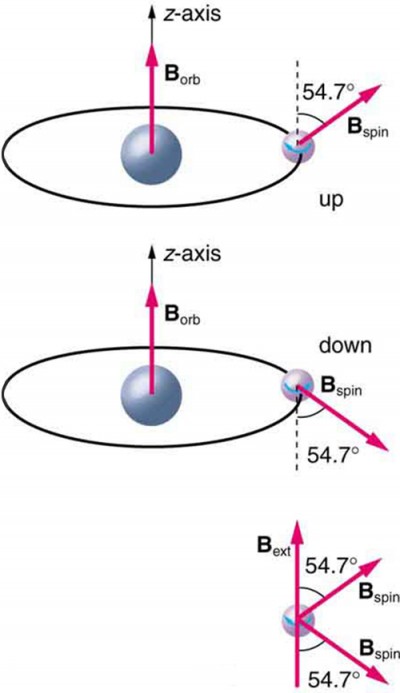 Figure 4 shows several hydrogen states corresponding to different sets of quantum numbers. Note that these clouds of probability are the locations of electrons as determined by making repeated measurements—each measurement finds the electron in a definite location, with a greater chance of finding the electron in some places rather than others. With repeated measurements, the pattern of probability shown in the figure emerges. The clouds of probability do not look like nor do they correspond to classical orbits. The uncertainty principle actually prevents us and nature from knowing how the electron gets from one place to another, and so an orbit really does not exist as such. Nature on a small scale is again much different from that on the large scale. 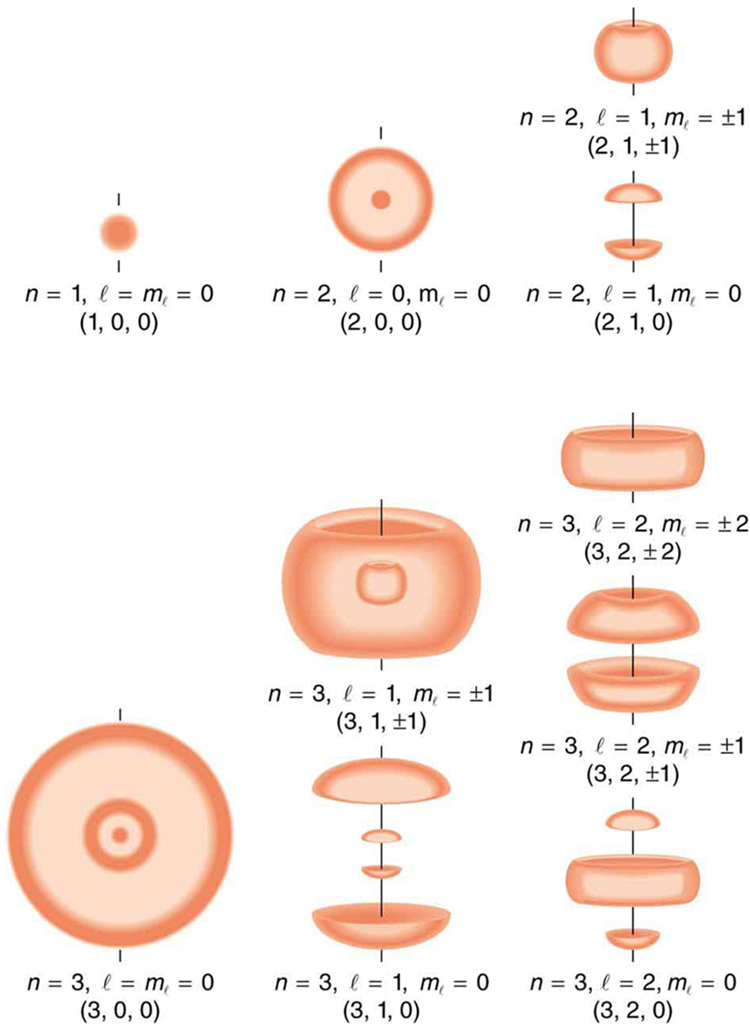 Figure 4. Probability clouds for the electron in the ground state and several excited states of hydrogen. The nature of these states is determined by their sets of quantum numbers, here given as (n, l, ml). The ground state is (0, 0, 0); one of the possibilities for the second excited state is (3, 2, 1). The probability of finding the electron is indicated by the shade of color; the darker the coloring the greater the chance of finding the electron.

We will see that the quantum numbers discussed in this section are valid for a broad range of particles and other systems, such as nuclei. Some quantum numbers, such as intrinsic spin, are related to fundamental classifications of subatomic particles, and they obey laws that will give us further insight into the substructure of matter and its interactions.

The classic Stern-Gerlach Experiment shows that atoms have a property called spin. Spin is a kind of intrinsic angular momentum, which has no classical counterpart. When the z-component of the spin is measured, one always gets one of two values: spin up or spin down. 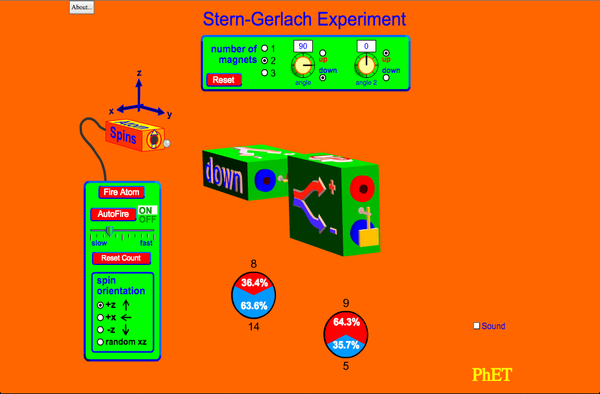 quantum numbers: the values of quantized entities, such as energy and angular momentum

spin projection quantum number: quantum number that can be used to calculate the intrinsic electron angular momentum along the z-axis

z-component of spin angular momentum: component of intrinsic electron spin along the z-axis

magnitude of the intrinsic (internal) spin angular momentum: given by [latex]S=\sqrt{s\left(s+1\right)}\frac{h}{2\pi }\\[/latex]