The more tightly bound a system is, the stronger the forces that hold it together and the greater the energy required to pull it apart. We can therefore learn about nuclear forces by examining how tightly bound the nuclei are. We define the binding energy (BE) of a nucleus to be the energy required to completely disassemble it into separate protons and neutrons. We can determine the BE of a nucleus from its rest mass. The two are connected through Einstein’s famous relationship E = (Δm)c2. A bound system has a smaller mass than its separate constituents; the more tightly the nucleons are bound together, the smaller the mass of the nucleus.

Imagine pulling a nuclide apart as illustrated in Figure 1. Work done to overcome the nuclear forces holding the nucleus together puts energy into the system. By definition, the energy input equals the binding energy BE. The pieces are at rest when separated, and so the energy put into them increases their total rest mass compared with what it was when they were glued together as a nucleus. That mass increase is thus Δm = BE/c2. This difference in mass is known as mass defect. It implies that the mass of the nucleus is less than the sum of the masses of its constituent protons and neutrons. A nuclide AX has Z protons and N neutrons, so that the difference in mass is ∆m = (Zmp + Nmn) − mtot.Thus, BE = (∆m)c2 = [(Zmp + Nmn) − mtot]c2, where mtot is the mass of the nuclide AX, mp is the mass of a proton, and mn is the mass of a neutron. Traditionally, we deal with the masses of neutral atoms. To get atomic masses into the last equation, we first add Z electrons to mtot, which gives m(AX), the atomic mass of the nuclide. We then add Z electrons to the Z protons, which gives Zm(1H), or Z times the mass of a hydrogen atom. Thus the binding energy of a nuclide AX is BE = {[Zm(1H) + Nmn] − m(AX)}c2.

Figure 1. Work done to pull a nucleus apart into its constituent protons and neutrons increases the mass of the system. The work to disassemble the nucleus equals its binding energy BE. A bound system has less mass than the sum of its parts, especially noticeable in the nuclei, where forces and energies are very large.

The atomic masses can be found in Appendix A, most conveniently expressed in unified atomic mass units u (1 u = 931.5 MeV/c2). BE is thus calculated from known atomic masses.

A puzzle created by radioactive dating of rocks is resolved by radioactive heating of Earth’s interior. This intriguing story is another example of how small-scale physics can explain large-scale phenomena.

Radioactive dating plays a role in determining the approximate age of the Earth. The oldest rocks on Earth solidified about 3.5×109 years ago—a number determined by uranium-238 dating. These rocks could only have solidified once the surface of the Earth had cooled sufficiently. The temperature of the Earth at formation can be estimated based on gravitational potential energy of the assemblage of pieces being converted to thermal energy. Using heat transfer concepts discussed in Thermodynamics it is then possible to calculate how long it would take for the surface to cool to rock-formation temperatures. The result is about 109 years. The first rocks formed have been solid for 3.5×109 years, so that the age of the Earth is approximately 4.5 × 109 years. There is a large body of other types of evidence (both Earth-bound and solar system characteristics are used) that supports this age. The puzzle is that, given its age and initial temperature, the center of the Earth should be much cooler than it is today (see Figure 2). 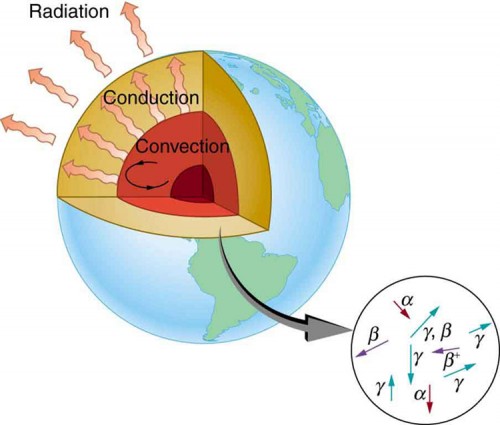 Figure 2. The center of the Earth cools by well-known heat transfer methods. Convection in the liquid regions and conduction move thermal energy to the surface, where it radiates into cold, dark space. Given the age of the Earth and its initial temperature, it should have cooled to a lower temperature by now. The blowup shows that nuclear decay releases energy in the Earth’s interior. This energy has slowed the cooling process and is responsible for the interior still being molten.

We know from seismic waves produced by earthquakes that parts of the interior of the Earth are liquid. Shear or transverse waves cannot travel through a liquid and are not transmitted through the Earth’s core. Yet compression or longitudinal waves can pass through a liquid and do go through the core. From this information, the temperature of the interior can be estimated. As noticed, the interior should have cooled more from its initial temperature in the 4.5×109 years since its formation. In fact, it should have taken no more than about 109 years to cool to its present temperature. What is keeping it hot? The answer seems to be radioactive decay of primordial elements that were part of the material that formed the Earth (see the blowup in Figure 2).

Nuclides such as 238U and 40K have half-lives similar to or longer than the age of the Earth, and their decay still contributes energy to the interior. Some of the primordial radioactive nuclides have unstable decay products that also release energy—238U has a long decay chain of these. Further, there were more of these primordial radioactive nuclides early in the life of the Earth, and thus the activity and energy contributed were greater then (perhaps by an order of magnitude). The amount of power created by these decays per cubic meter is very small. However, since a huge volume of material lies deep below the surface, this relatively small amount of energy cannot escape quickly. The power produced near the surface has much less distance to go to escape and has a negligible effect on surface temperatures.

A final effect of this trapped radiation merits mention. Alpha decay produces helium nuclei, which form helium atoms when they are stopped and capture electrons. Most of the helium on Earth is obtained from wells and is produced in this manner. Any helium in the atmosphere will escape in geologically short times because of its high thermal velocity.

What patterns and insights are gained from an examination of the binding energy of various nuclides? First, we find that BE is approximately proportional to the number of nucleons A in any nucleus. About twice as much energy is needed to pull apart a nucleus like 24Mg compared with pulling apart 12C, for example. To help us look at other effects, we divide BE by A and consider the binding energy per nucleon, BE/A. The graph of BE/A in Figure 3 reveals some very interesting aspects of nuclei. We see that the binding energy per nucleon averages about 8 MeV, but is lower for both the lightest and heaviest nuclei. This overall trend, in which nuclei with A equal to about 60 have the greatest BE/A and are thus the most tightly bound, is due to the combined characteristics of the attractive nuclear forces and the repulsive Coulomb force. It is especially important to note two things—the strong nuclear force is about 100 times stronger than the Coulomb force, and the nuclear forces are shorter in range compared to the Coulomb force. So, for low-mass nuclei, the nuclear attraction dominates and each added nucleon forms bonds with all others, causing progressively heavier nuclei to have progressively greater values of BE/A. This continues up to A ≈ 60, roughly corresponding to the mass number of iron. Beyond that, new nucleons added to a nucleus will be too far from some others to feel their nuclear attraction. Added protons, however, feel the repulsion of all other protons, since the Coulomb force is longer in range. Coulomb repulsion grows for progressively heavier nuclei, but nuclear attraction remains about the same, and so BE/A becomes smaller. This is why stable nuclei heavier than A ≈ 40 have more neutrons than protons. Coulomb repulsion is reduced by having more neutrons to keep the protons farther apart (see Figure 4). 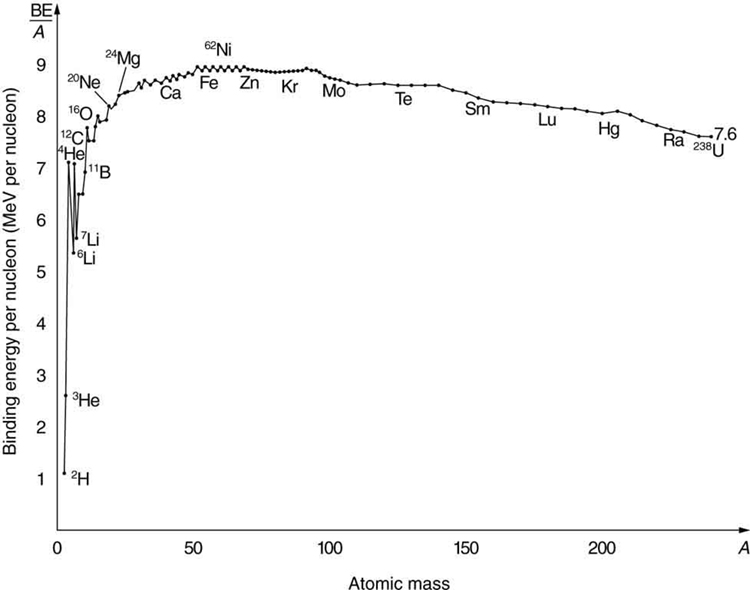 Figure 3. A graph of average binding energy per nucleon, BE/A, for stable nuclei. The most tightly bound nuclei are those with A near 60, where the attractive nuclear force has its greatest effect. At higher As, the Coulomb repulsion progressively reduces the binding energy per nucleon, because the nuclear force is short ranged. The spikes on the curve are very tightly bound nuclides and indicate shell closures. 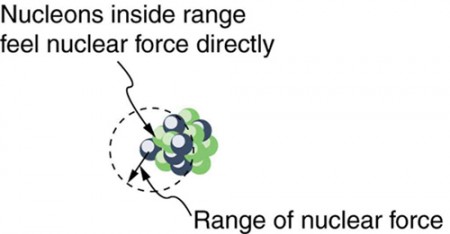 There are some noticeable spikes on the BE/A graph, which represent particularly tightly bound nuclei. These spikes reveal further details of nuclear forces, such as confirming that closed-shell nuclei (those with magic numbers of protons or neutrons or both) are more tightly bound. The spikes also indicate that some nuclei with even numbers for Z and N, and with Z=N, are exceptionally tightly bound. This finding can be correlated with some of the cosmic abundances of the elements.

The most common elements in the universe, as determined by observations of atomic spectra from outer space, are hydrogen, followed by 4He, with much smaller amounts of 12C and other elements. It should be noted that the heavier elements are created in supernova explosions, while the lighter ones are produced by nuclear fusion during the normal life cycles of stars, as will be discussed in subsequent chapters. The most common elements have the most tightly bound nuclei. It is also no accident that one of the most tightly bound light nuclei is 4He, emitted in α decay.

Example 1. What Is BE/A for an Alpha Particle?

Calculate the binding energy per nucleon of 4He, the α particle.

To find BE/A, we first find BE using the equation

and then divide by A. This is straightforward once we have looked up the appropriate atomic masses in Appendix A.

The binding energy for a nucleus is given by the equation

This is a large binding energy per nucleon compared with those for other low-mass nuclei, which have BE/A ≈ 3 MeV/nucleon. This indicates that 4He is tightly bound compared with its neighbors on the chart of the nuclides. You can see the spike representing this value of BE/A for 4He on the graph in Figure 3. This is why 4He is stable. Since 4He is tightly bound, it has less mass than other A = 4 nuclei and, therefore, cannot spontaneously decay into them. The large binding energy also helps to explain why some nuclei undergo α decay. Smaller mass in the decay products can mean energy release, and such decays can be spontaneous. Further, it can happen that two protons and two neutrons in a nucleus can randomly find themselves together, experience the exceptionally large nuclear force that binds this combination, and act as a 4He unit within the nucleus, at least for a while. In some cases, the 4He escapes, and α decay has then taken place.

There is more to be learned from nuclear binding energies. The general trend in BE/A is fundamental to energy production in stars, and to fusion and fission energy sources on Earth, for example. This is one of the applications of nuclear physics covered in Medical Applications of Nuclear Physics. The abundance of elements on Earth, in stars, and in the universe as a whole is related to the binding energy of nuclei and has implications for the continued expansion of the universe.

For Reaction And Binding Energies and Activity Calculations in Nuclear Physics

Start a chain reaction, or introduce non-radioactive isotopes to prevent one. Control energy production in a nuclear reactor! Click on the image to download the simulation. 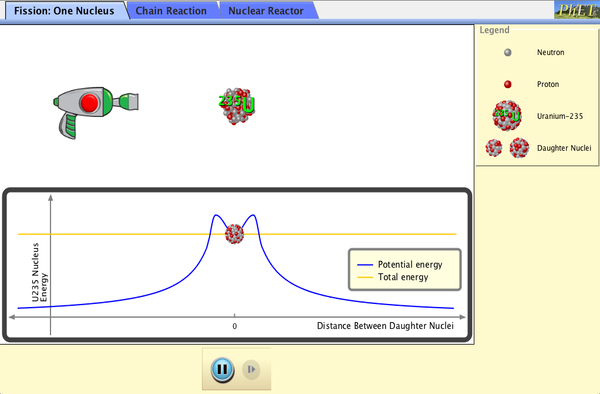 binding energy: the energy needed to separate nucleus into individual protons and neutrons

8. (a) −9.315 MeV; (b) The negative binding energy implies an unbound system; (c) This assumption that it is two bound neutrons is incorrect.