Superconductors are materials with a resistivity of zero. They are familiar to the general public because of their practical applications and have been mentioned at a number of points in the text. Because the resistance of a piece of superconductor is zero, there are no heat losses for currents through them; they are used in magnets needing high currents, such as in MRI machines, and could cut energy losses in power transmission. But most superconductors must be cooled to temperatures only a few kelvin above absolute zero, a costly procedure limiting their practical applications. In the past decade, tremendous advances have been made in producing materials that become superconductors at relatively high temperatures. There is hope that room temperature superconductors may someday be manufactured.

Superconductivity was discovered accidentally in 1911 by the Dutch physicist H. Kamerlingh Onnes (1853–1926) when he used liquid helium to cool mercury. Onnes had been the first person to liquefy helium a few years earlier and was surprised to observe the resistivity of a mediocre conductor like mercury drop to zero at a temperature of 4.2 K. We define the temperature at which and below which a material becomes a superconductor to be its critical temperature, denoted by Tc. (See Figure 1.) Progress in understanding how and why a material became a superconductor was relatively slow, with the first workable theory coming in 1957. Certain other elements were also found to become superconductors, but all had Tc s less than 10 K, which are expensive to maintain. Although Onnes received a Nobel prize in 1913, it was primarily for his work with liquid helium. 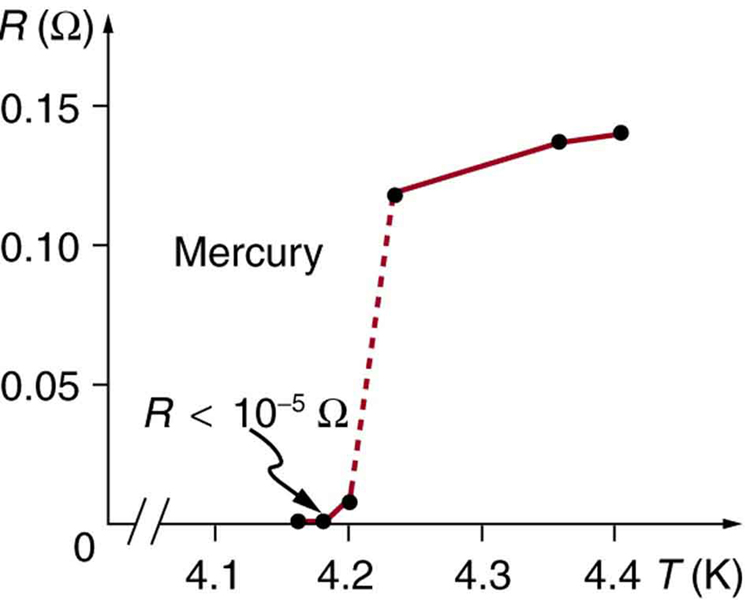 In 1986, a breakthrough was announced—a ceramic compound was found to have an unprecedented Tc of 35 K. It looked as if much higher critical temperatures could be possible, and by early 1988 another ceramic (this of thallium, calcium, barium, copper, and oxygen) had been found to have Tc = 125 K (see Figure 2.) The economic potential of perfect conductors saving electric energy is immense for Tc s above 77 K, since that is the temperature of liquid nitrogen. Although liquid helium has a boiling point of 4 K and can be used to make materials superconducting, it costs about $5 per liter. Liquid nitrogen boils at 77 K, but only costs about $0.30 per liter. There was general euphoria at the discovery of these complex ceramic superconductors, but this soon subsided with the sobering difficulty of forming them into usable wires. The first commercial use of a high temperature superconductor is in an electronic filter for cellular phones. High-temperature superconductors are used in experimental apparatus, and they are actively being researched, particularly in thin film applications. 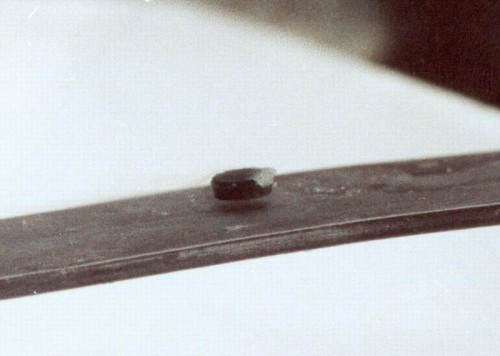 The search is on for even higher Tc superconductors, many of complex and exotic copper oxide ceramics, sometimes including strontium, mercury, or yttrium as well as barium, calcium, and other elements. Room temperature (about 293 K) would be ideal, but any temperature close to room temperature is relatively cheap to produce and maintain. There are persistent reports of Tc s over 200 K and some in the vicinity of 270 K. Unfortunately, these observations are not routinely reproducible, with samples losing their superconducting nature once heated and recooled (cycled) a few times (see Figure 3.) They are now called USOs or unidentified superconducting objects, out of frustration and the refusal of some samples to show high Tc even though produced in the same manner as others. Reproducibility is crucial to discovery, and researchers are justifiably reluctant to claim the breakthrough they all seek. Time will tell whether USOs are real or an experimental quirk.

Figure 3. (a) This graph, adapted from an article in Physics Today, shows the behavior of a single sample of a high-temperature superconductor in three different trials. In one case the sample exhibited a Tc of about 230 K, whereas in the others it did not become superconducting at all. The lack of reproducibility is typical of forefront experiments and prohibits definitive conclusions. (b) This colorful diagram shows the complex but systematic nature of the lattice structure of a high-temperature superconducting ceramic. (credit: en:Cadmium, Wikimedia Commons)

The theory of ordinary superconductors is difficult, involving quantum effects for widely separated electrons traveling through a material. Electrons couple in a manner that allows them to get through the material without losing energy to it, making it a superconductor. High-Tc superconductors are more difficult to understand theoretically, but theorists seem to be closing in on a workable theory. The difficulty of understanding how electrons can sneak through materials without losing energy in collisions is even greater at higher temperatures, where vibrating atoms should get in the way. Discoverers of high Tc may feel something analogous to what a politician once said upon an unexpected election victory—“I wonder what we did right?”

Superconductors: materials with resistivity of zero

critical temperature: the temperature at which and below which a material becomes a superconductor