Kinetic Energy and the Work-Energy Theorem

What happens to the work done on a system? Energy is transferred into the system, but in what form? Does it remain in the system or move on? The answers depend on the situation. For example, if the lawn mower in Figure 1a is pushed just hard enough to keep it going at a constant speed, then energy put into the mower by the person is removed continuously by friction, and eventually leaves the system in the form of heat transfer. In contrast, work done on the briefcase by the person carrying it up stairs in Figure 1d is stored in the briefcase-Earth system and can be recovered at any time, as shown in Figure 1e. In fact, the building of the pyramids in ancient Egypt is an example of storing energy in a system by doing work on the system. Some of the energy imparted to the stone blocks in lifting them during construction of the pyramids remains in the stone-Earth system and has the potential to do work. 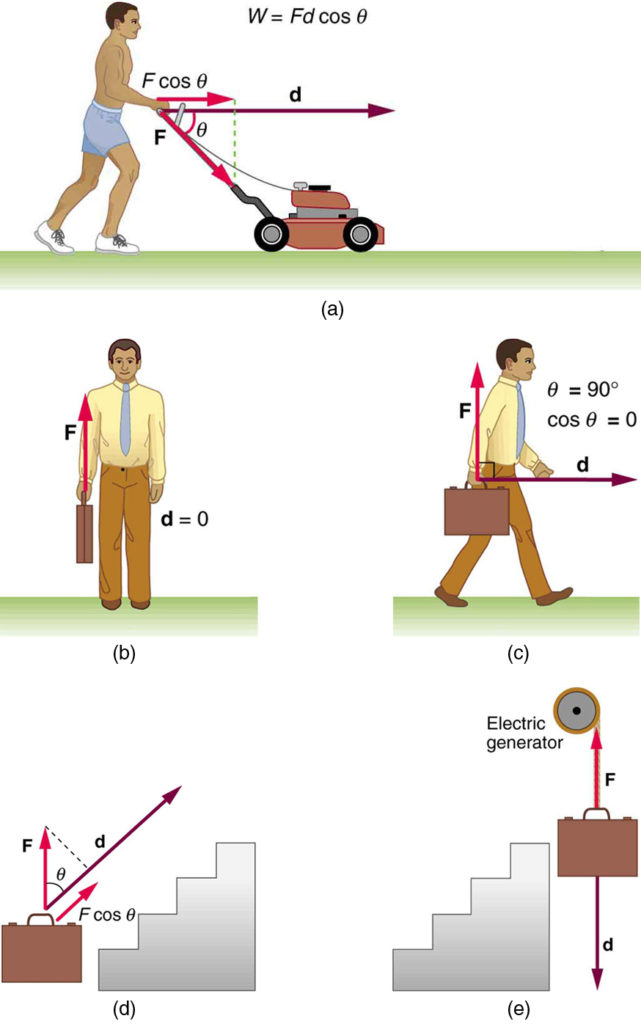 Net Work and the Work-Energy Theorem

We know from the study of Newton’s laws in Dynamics: Force and Newton’s Laws of Motion that net force causes acceleration. We will see in this section that work done by the net force gives a system energy of motion, and in the process we will also find an expression for the energy of motion.

Let us start by considering the total, or net, work done on a system. Net work is defined to be the sum of work done by all external forces—that is, net work is the work done by the net external force Fnet. In equation form, this is Wnet = Fnetd cos θ where θ is the angle between the force vector and the displacement vector.

Figure 2a shows a graph of force versus displacement for the component of the force in the direction of the displacement—that is, an F cos θ vs. d graph. In this case, F cos θ is constant. You can see that the area under the graph is Fd cos θ, or the work done. Figure 2b shows a more general process where the force varies. The area under the curve is divided into strips, each having an average force (F cos θ)i(ave). The work done is (F cos θ)i(ave)di for each strip, and the total work done is the sum of the Wi. Thus the total work done is the total area under the curve, a useful property to which we shall refer later. 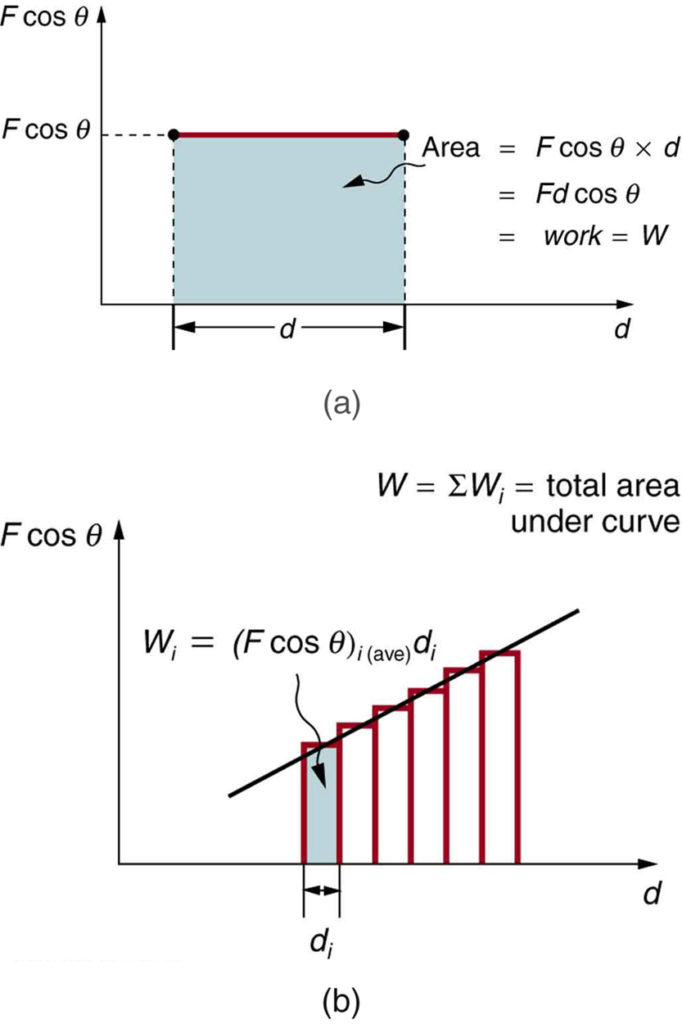 Net work will be simpler to examine if we consider a one-dimensional situation where a force is used to accelerate an object in a direction parallel to its initial velocity. Such a situation occurs for the package on the roller belt conveyor system shown in Figure 3.

Figure 3. A package on a roller belt is pushed horizontally through a distance d.

The force of gravity and the normal force acting on the package are perpendicular to the displacement and do no work. Moreover, they are also equal in magnitude and opposite in direction so they cancel in calculating the net force. The net force arises solely from the horizontal applied force Fapp and the horizontal friction force f. Thus, as expected, the net force is parallel to the displacement, so that θ = 0º and cos θ = 1, and the net work is given by Wnet = Fnetd.

The effect of the net force Fnet is to accelerate the package from v0 to v. The kinetic energy of the package increases, indicating that the net work done on the system is positive. (See Example 1.) By using Newton’s second law, and doing some algebra, we can reach an interesting conclusion. Substituting Fnet = ma  from Newton’s second law gives Wnet = mad.

To get a relationship between net work and the speed given to a system by the net force acting on it, we take d = x − x0 and use the equation studied in Motion Equations for Constant Acceleration in One Dimension for the change in speed over a distance d if the acceleration has the constant value a; namely, v2 = v02 + 2ad (note that a appears in the expression for the net work). Solving for acceleration gives [latex]\displaystyle{a}=\frac{v^2-v_0^2}{2d}\\[/latex]. When a is substituted into the preceding expression for Wnet, we obtain

The d cancels, and we rearrange this to obtain

This expression is called the work-energy theorem, and it actually applies in general (even for forces that vary in direction and magnitude), although we have derived it for the special case of a constant force parallel to the displacement. The theorem implies that the net work on a system equals the change in the quantity [latex]\frac{1}{2}mv^2\\[/latex]. This quantity is our first example of a form of energy.

We are aware that it takes energy to get an object, like a car or the package in Figure 3, up to speed, but it may be a bit surprising that kinetic energy is proportional to speed squared. This proportionality means, for example, that a car traveling at 100 km/h has four times the kinetic energy it has at 50 km/h, helping to explain why high-speed collisions are so devastating. We will now consider a series of examples to illustrate various aspects of work and energy.

Example 1. Calculating the Kinetic Energy of a Package

Suppose a 30.0-kg package on the roller belt conveyor system in Figure 3 is moving at 0.500 m/s. What is its kinetic energy?

Because the mass m and speed v are given, the kinetic energy can be calculated from its definition as given in the equation [latex]\text{KE}=\frac{1}{2}mv^2\\[/latex].

Note that the unit of kinetic energy is the joule, the same as the unit of work, as mentioned when work was first defined. It is also interesting that, although this is a fairly massive package, its kinetic energy is not large at this relatively low speed. This fact is consistent with the observation that people can move packages like this without exhausting themselves.

Example 2. Determining the Work to Accelerate a Package

Strategy and Concept for Part 1

This is a motion in one dimension problem, because the downward force (from the weight of the package) and the normal force have equal magnitude and opposite direction, so that they cancel in calculating the net force, while the applied force, friction, and the displacement are all horizontal. (See Figure 3.) As expected, the net work is the net force times distance.

This value is the net work done on the package. The person actually does more work than this, because friction opposes the motion. Friction does negative work and removes some of the energy the person expends and converts it to thermal energy. The net work equals the sum of the work done by each individual force.

Strategy and Concept for Part 2

The forces acting on the package are gravity, the normal force, the force of friction, and the applied force. The normal force and force of gravity are each perpendicular to the displacement, and therefore do no work.

The applied force does work.

The friction force and displacement are in opposite directions, so that θ=180º, and the work done by friction is

So the amounts of work done by gravity, by the normal force, by the applied force, and by friction are, respectively,

The calculated total work Wtotal as the sum of the work by each force agrees, as expected, with the work Wnet done by the net force. The work done by a collection of forces acting on an object can be calculated by either approach.

Find the speed of the package in Figure 3 at the end of the push, using work and energy concepts.

The work-energy theorem in equation form is

Example 4. Work and Energy Can Reveal Distance, Too

How far does the package in Figure 3 coast after the push, assuming friction remains constant? Use work and energy considerations.

We know that once the person stops pushing, friction will bring the package to rest. In terms of energy, friction does negative work until it has removed all of the package’s kinetic energy. The work done by friction is the force of friction times the distance traveled times the cosine of the angle between the friction force and displacement; hence, this gives us a way of finding the distance traveled after the person stops pushing.

The normal force and force of gravity cancel in calculating the net force. The horizontal friction force is then the net force, and it acts opposite to the displacement, so θ = 180º. To reduce the kinetic energy of the package to zero, the work Wfr by friction must be minus the kinetic energy that the package started with plus what the package accumulated due to the pushing. Thus Wfr=−95.75 J. Furthermore, Wfr = fd′ cos θ = −fd′, where d′ is the distance it takes to stop. Thus,

This is a reasonable distance for a package to coast on a relatively friction-free conveyor system. Note that the work done by friction is negative (the force is in the opposite direction of motion), so it removes the kinetic energy.

Some of the examples in this section can be solved without considering energy, but at the expense of missing out on gaining insights about what work and energy are doing in this situation. On the whole, solutions involving energy are generally shorter and easier than those using kinematics and dynamics alone.

net work: work done by the net force, or vector sum of all the forces, acting on an object

work-energy theorem: the result, based on Newton’s laws, that the net work done on an object is equal to its change in kinetic energy

kinetic energy: the energy an object has by reason of its motion, equal to [latex]\frac{1}{2}{\text{mv}}^{2}\\[/latex] for the translational (i.e., non-rotational) motion of an object of mass m moving at speed v