Alkanes are organic compounds that consist entirely of single-bonded carbon and hydrogen atoms and lack any other functional groups. Alkanes have the general formula [latex] C_nH_{2n+2} [/latex] and can be subdivided into the following three groups: the linear straight-chain alkanes, branched alkanes, and cycloalkanes. Alkanes are also saturated hydrocarbons. Alkanes are the simplest and least reactive hydrocarbon species containing only carbons and hydrogens. They are commercially very important, being the principal constituent of gasoline and lubricating oils and are extensively employed in organic chemistry; though the role of pure alkanes (such as hexanes) is relegated mostly to serving as solvents. The distinguishing feature of an alkane, making it distinct from other compounds that also exclusively contain carbon and hydrogen, is its lack of unsaturation. That is to say, it contains no double or triple bonds, which are highly reactive in organic chemistry. Though not totally devoid of reactivity, their lack of reactivity under most laboratory conditions makes them a relatively uninteresting, though very important component of organic chemistry. As you will learn about later, the energy confined within the carbon-carbon bond and the carbon-hydrogen bond is quite high and their rapid oxidation produces a large amount of heat, typically in the form of fire.

More on properties of alkanes

Alkanes with four or more carbon atoms can have more than one arrangement of atoms, so they can form structural isomers. The carbon atoms can form a single unbranched chain, or the primary chain of carbon atoms can have one or more shorter chains that form branches. For example, butane (C4H10) has two possible structures. Normal butane (usually called n-butane or simply butane) is CH3CH2CH2CH3, in which the carbon atoms form a single unbranched chain. In contrast, the condensed structural formula for the isomer 2-methylpropane (sometimes called isobutane) is (CH3)2CHCH3, in which the primary chain of three carbon atoms has a one-carbon chain branching at the central carbon. Three-dimensional representations of both structures are as follows: 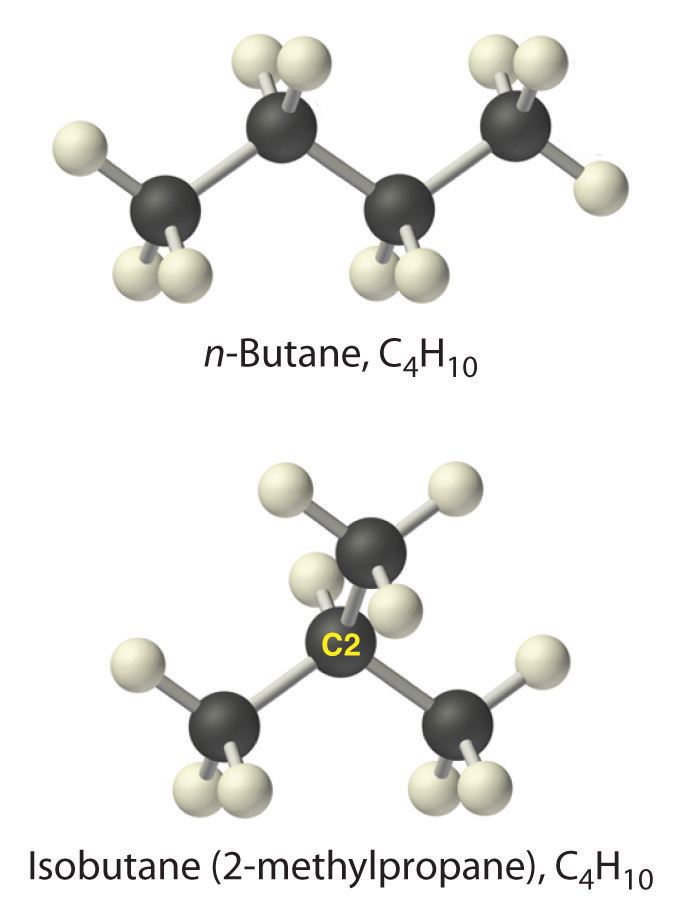 One of the major components of gasoline is commonly called isooctane; its structure is as follows: 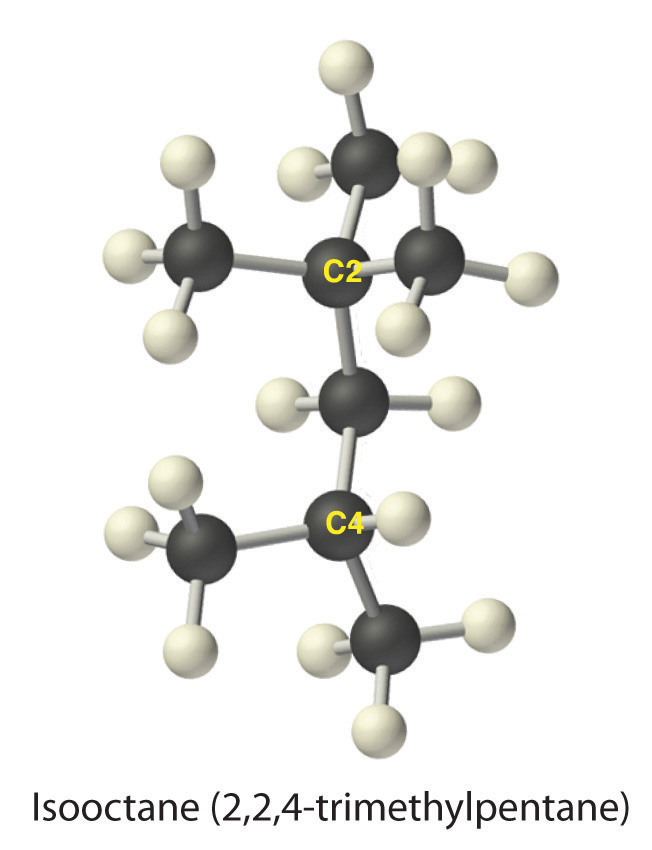 The compound has a chain of five carbon atoms, so it is a derivative of pentane. There are two methyl group branches at one carbon atom and one methyl group at another. Using the lowest possible numbers for the branches gives 2,2,4-trimethylpentane for the systematic name of this compound.

The simplest alkane is methane (CH4), a colorless, odorless gas that is the major component of natural gas. Other simple alkanes are used as fuels and solvents.

The boiling points shown are  for the “straight chain” isomers in which there are more than one (Figure 1). Notice that the first four alkanes are gases at room temperature, and solids do not start to appear until about C17H36.

The temperatures cannot be more precise than those given in this chart because each isomer has a different melting and boiling point. By the time you get 17 carbons into an alkane, there are unbelievable numbers of isomers!  Cycloalkanes have boiling points that are approximately 10 – 20 oC higher than the corresponding straight chain alkane.

There electronegativity difference between carbon and hydrogen (2.1 vs. 1.9) is small; therefore, there is only a slight bond polarity, meaning that the only attractions between one molecule and its neighbors will be Van der Waals dispersion forces. These  forces will be very small for a molecule like methane but will increase as the size of the molecules increase. Therefore, the boiling points of the alkanes increase with the molecular size.

Regarding isomers, the more branched the chain, the lower the boiling point tends to be. Van der Waals dispersion forces are smaller for shorter molecules and only operate over very short distances between one molecule and its neighbors. It is more difficult for short, bulky molecules (with substantial amounts of branching) to lie close together (compact) compared with long, thin molecules.

The boiling points of the three isomers of C5H12 are as follows:

Note that as the surface area of the alkane becomes smaller (because of branching), the boiling point is slightly reduced.

Alkanes (both normal and cycloalkanes) are virtually insoluble in water but dissolve in organic solvents. The liquid alkanes are good solvents for many other covalent compounds. When a molecular substance dissolves in water, the following must occur:

Breaking either of these attractions requires energy, although the amount of energy required to break the Van der Waals dispersion forces in a compound, such as methane, is relatively negligible; this is not true of the hydrogen bonds in water.

To simplify, a substance will dissolve if sufficient energy is released when the new bonds are formed between the substance and the water to make up for the energy required to break the original attractions. The only new attractions between the alkane and the water molecules are the Van der Waals forces. These forces to do not release a sufficient amount of energy to compensate for the energy required to break the hydrogen bonds in water. Therefore, the alkane does not dissolve.

Alkanes contain strong carbon-carbon single bonds and strong carbon-hydrogen bonds. The carbon-hydrogen bonds are only very slightly polar. Therefore, there is no portion of the molecule that carries any significant amount of positive or negative charge, which is required for other molecules to be attracted to it. For example, many organic reactions start because an ion or a polar molecule is attracted to a portion of an organic molecule, which carries some positive or negative charge. This attraction does not occur with alkanes because alkane molecules do not have this separation of charge. The net effect is that alkanes have a fairly restricted set of reactions, including the following:

Cycloalkanes are very similar to the alkanes in reactivity, except for the very small cycloalkanes, especially cyclopropane. Cyclopropane is much more reactive than what is expected because of the bond angles in the ring. Normally, when carbon forms four single bonds, the bond angles are approximately 109.5°.

In cyclopropane, the bond angles are 60°.

With the electron pairs this close together, there is a significant amount of repulsion between the bonding pairs joining the carbon atoms, making the bonds easier to break.

More on reactivity of alkanes