Before we begin our exploration of stereochemistry and chirality, we first need to consider the subject of conformational isomerism,  which has to do with rotation about single bonds.

We learned in section 2.1 that single bonds in organic molecules are free to rotate, due to the ‘end-to-end’ (sigma) nature of their orbital overlap. Consider the carbon-oxygen bond in ethanol, for example: with a 180o rotation about this bond, the shape of the molecule would look quite different:

Or ethane: rotation about the carbon-carbon sigma bond results in many different possible three-dimensional arrangements of the atoms.

These different arrangements, resulting from sigma bond rotation, are referred to in organic chemistry as conformations. Any one specific conformation is called a conformational isomer, or conformer.

A representation of a molecule in which the atoms and bonds are viewed along the axis about which rotation occurs is called a Newman projection.

Conformations of ethane – staggered and eclipsed

The six carbon-hydrogen bonds are shown as solid lines protruding from the two carbons.  Note that we do not draw bonds as solid or dashed wedges in a Newman projection.

The lowest energy conformation of ethane, shown in the figure above, is called the ‘staggered’ conformation: all of the dihedral angles are 60o, and the distance between the front and back C-H bonds is maximized.

If we now rotate the front CH3 group 60° clockwise, the molecule is in the highest energy ‘eclipsed’ conformation, where the dihedral angles are all 0o (we stagger the bonds slightly in our Newman projection drawing so that we can see them all).

This brings the electrons in the front and back C-H bonds closer together, and there is repulsion between them.  The energy of the eclipsed conformation is approximately 12 kJ/mol higher (less stable) than that of the staggered conformation.  Rotation then is not strictly “free” because there is a 12 kJ/mol energy barrier to overcome on eclipsing the hydrogens. Even so, the barrier is low enough that rotation is very rapid at room temperature, occurring on the order of [latex] 10^{10} [/latex] times per second.

It is very useful to create models of these conformations using your molecular model kit.  The two main conformations of ethane are shown here as ball-and-stick drawings: 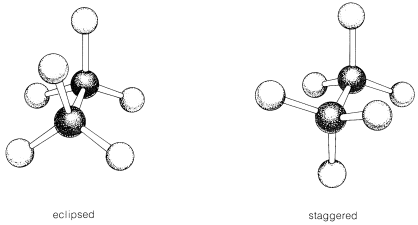 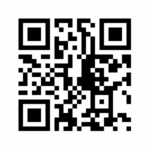 If one looks at one of the C-C bonds in propane (three carbons), it has the same type of graph, but the energy difference between staggered and eclipsed is slightly higher 14 kJ/mol.  See Wallace’s analysis.

Now let’s consider butane, with its four-carbon chain.  There are now three rotating carbon-carbon bonds to consider, but we will focus on the middle bond between C2 and C3. Below are two representations of butane in a conformation which puts the two CH3 groups (C1 and C4)  in the eclipsed position, with the two C-C bonds at a 0o dihedral angle.  With cases like this, space-filling models usually show less interference (steric hindrance) for staggered conformations than for eclipsed conformations, .

If we rotate the front, (blue) carbon by 60° clockwise, the butane molecule is now in a staggered conformation.

This is more specifically referred to as the gauche conformation of butane.  Notice that although they are staggered, the two methyl groups are not as far apart as they could possibly be.

A further rotation of 60° gives us a second eclipsed conformation (B) in which both methyl groups are lined up with hydrogen atoms.

One more 60 rotation produces another staggered conformation called the anti conformation, where the two methyl groups are positioned opposite each other (a dihedral angle of 180o).

The fully eclipsed conformation is clearly the highest in energy and least favorable since the largest groups are interacting directly with each other. As the molecule rotates, it adopts the relatively stable gauche conformation. As it continues to rotate, it encounters less favorable eclipsed conformation in which a methyl group eclipses a hydrogen. As rotation continues, the molecule comes to the anti conformation, which is the most stable since the substituents are staggered and the methyl groups are as far away from each other as possible. An energy diagram is a graph which represents the energy of a molecule as a function of some changing parameter. An energy diagram can be made as a function of dihedral angle for butane (Figure 5).

In the same way, steric strain causes the eclipsed A conformation – where the two methyl groups are as close together as they can possibly be – to be higher in energy than the two eclipsed B conformations.  The six main conformations can be seen in this ball-and-stick diagram:

Because the anti conformation is lowest in energy (and also simply for ease of drawing), it is conventional to draw open-chain alkanes in a ‘zigzag’ form, which implies anti conformation at all carbon-carbon bonds. The figure below shows, as an example, a Newman projection looking down the C2-C3 bond of octane. 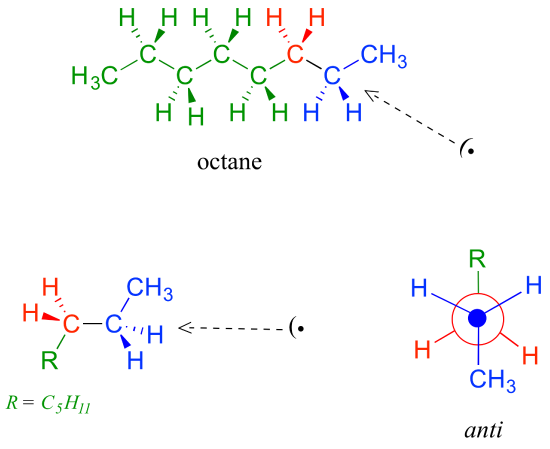 Problems involving conformations of higher alkanes will be covered in detail in section 3.7.  Cyclic alkanes are dealt with in the next section.

Draw Newman projections of the lowest and highest energy conformations of propane. Draw a Newman projection, looking down the C2-C3 bond, of 1-butene in the conformation shown below (C2 should be your front carbon).