The anions from ketones, called enolates, can act as a nucleophile in SN2 type reactions.  Overall an α hydrogen is replaced with an alkyl group and a new carbon-carbon bond is formed.  These alkylations are affected by the same limitations as SN2 reactions previously discussed.  A good leaving group, chloride, bromide, iodide or tosylate, should be used.  Also, secondary and tertiary leaving groups should not be used because of poor reactivity and possible competition with elimination reactions.  Lastly, it is important to use a strong base, such as LDA or sodium amide, for preparing the enolate from the ketone.  Using a weaker base such as hydroxide or an alkoxide leaves the possibility of multiple alkylations occurring, and competing SN2 reactions with the base.

1) Enolate formation.  The B– represents a strong base such as NaNH2 or LDA:

Unsymmetrical ketones can be regioselctively alkylated to form one major product depending on the reagents.

Treatment with LDA in THF at -78oC tends to form the less substituted kinetic enolate.

Using sodium ethoxide in ethanol at room temperature forms the more substituted thermodynamic enolate, though yields of alkylation product are likely to be poorer because of the side reactions mentioned above.

1) Please write the structure of the product for the following reactions. 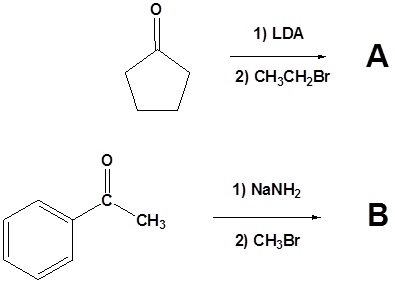