Personal Values and Personality at Work

Employees are individuals. How does their individuality affect their participation within an organization?

That is a big question, and there are different perspectives on how to answer it. Most answers place at least some emphasis on an individual’s personality. Though there are several approaches to defining personality, one commonly accepted formula for this is known as the “Big Five” personality traits, which you can remember using the acronym OCEAN. Personality psychologist Lewis Goldberg popularized the use of the following five traits in describing personality: 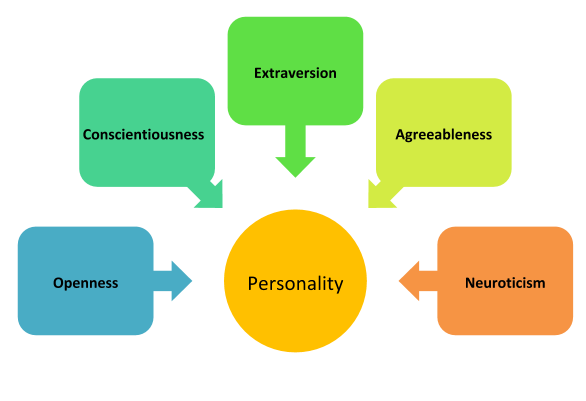 Many studies have been undertaken in attempt to measure the relationship between personality traits and job performance. Though these studies are far from definitive, each trait seems to show connections with certain tendencies, as shown in the following table.

The Myers-Briggs Type Indicator (MBTI) relies on the psychological theories of Carl Jung and works on the basic assumption that individuals fall into fairly distinct classes, or types, of personalities. Those types are created by combining personality categorizations along four distinct axes. Individuals are classified as characterized by either:

A person’s classifications within each of these four categories are then combined to create 16 unique personality types identified by the MBTI. Four-letter acronyms are used to name these personality types, with the letters representing the corresponding trait within each category. For example, a person who exhibits characteristics of extraversion, intuition, thinking, and judging would be classified as ENTJ.

The MBTI has been popular with businesses for decades. Despite many studies, the MBTI lacks scientific evidence showing reliability in identifying personality types and, crucially, in predicting job performance.

Another potential weakness of the tool is that it divides individuals into completely distinct classes for each category, not indicating how strong an individual’s preference is toward that end of the spectrum. What that means is that if someone is just slightly more introverted than extraverted, he or she receives the same classification as someone who is intensely introverted. The distinction between the two individuals is not represented.

Another significant factor in evaluating the MBTI is the question of stability and reliability. Critics point to data that shows that as much as 50 percent of an individual’s MBTI classification will change from test to test with as little as only four or five weeks between tests.[2] However, proponents question the validity of this argument, pointing to data that shows between 75 and 90 percent of subjects receive the same classification in at least three of the four categories on repeat tests.[3] They suggest that this is a very favorable level of consistency when compared to other personality testing tools.

In the end, proponents of the MBTI stress that the usefulness of the tool depends largely on how it is used. They warn strongly against its use for the purposes of hiring or promoting employees. For one thing, this only provides incentive for the test takers to falsify their answers to appear more favorable. The ease with which results can be manipulated by dishonest subjects is another potential weakness of the tool, according to detractors.

Instead, the MBTI is intended as a learning tool. It is meant to be taken for the sake of self-analysis with the goal of better understanding oneself and providing insight into how people can best use their personal traits and how they might be able to grow and improve on weaknesses. Administration of the MBTI is strictly controlled by the MBTI Foundation. It requires extensive training before anyone is allowed to administer it. In 2017, training cost $1,800.[4] The foundation and the trained administrators have strong incentives to defend it.

Personality traits are one large aspect of an individual’s makeup, but personal values introduce another vital area of interest and importance. Values are described as the stable, enduring goals that one has for life, the things that are counted as most important to the individual.

As with personality traits, many systems have been proposed for analyzing the values of individuals. One widely accepted system was developed by Shalom H. Schwartz and is known as the Schwartz theory of basic values. It identifies 10 such basic values:

Most theories assert that the creation of personal value systems is strongly influenced by early life experiences. Those values tend to remain relatively stable, though they are certainly still influenced by the accumulation of further experiences throughout life.

When we recognize and consider an individual’s personality and values, we can more clearly predict how that person will behave. Though a word of caution should be added to remind us that behavior is influenced by many factors and that every situation is unique, personality and values still remain helpful predictors.

Businesses (and individuals) use these attributes to identify the best fit for employees and potential future employees. Will a certain candidate for a job be a good fit for that position? Do the requirements and expectations of the position match both the person’s personality preferences and his or her value system? If not, the likelihood for poor performance or poor attitude increase, as does the likelihood that the employee will eventually leave the company in search of a better fit.

A wise business practice is to try to match individuals with the optimum role in light of their personality and values. If a business identifies an employee to be high in openness, that person should try to find a role that involves new and diverse activities rather than unchanging routine. Likewise, some roles are more suited for introverts than extraverts. Placing individuals in the role where they are most likely to succeed will certainly benefit the business as a result. The following table shows how individuals with certain values might excel in particular roles.

Beyond the consideration of job fitting, companies are increasingly aware of the importance of looking for employees whose individual values match those of the organization. This is particularly visible in organizations that are charitable in nature, whose existence revolves around a particular humanitarian cause. However, each business organization has its own particular set of values, and many businesses strongly promote those values. For example, if creative innovation is a large part of a company’s focus, it will likely look for employees who also share that focus personally. 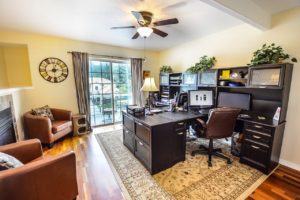 Working from a home office is becoming a more common part of business.

People and jobs are complex, so a simple test is not the final answer. Businesses recognize that flexibility in some environmental aspects may make room for more diversity. For example, more and more companies are allowing employees freedom to work flexible hours and in convenient locations. This may cater to an employee’s value of family focus, autonomy, or freedom of expression. Employees whose values are met in their work environment are more likely to be satisfied and productive.