Consumption and Trade in the British Atlantic

Britain’s central role in transatlantic trade greatly enriched the mother country, but it also created high standards of living for many North American colonists. This two-way relationship reinforced the colonial American feeling of commonality with British culture. It was not until trade relations, disturbed by political changes and the strain of warfare, became strained in the 1760s that colonists began to question these ties.

During the seventeenth and eighteenth century, improvements in manufacturing, transportation, and the availability of credit increased the opportunity for colonists to purchase consumer goods. Instead of making their own tools, clothes, and utensils colonists increasingly purchased luxury items made by specialized artisans and manufacturers. As the incomes of Americans rose and the prices of these commodities fell, these items shifted from luxuries to common goods. The average person’s ability to spend money on consumer goods became a sign of their respectability. Historians have called this process the “consumer revolution.” 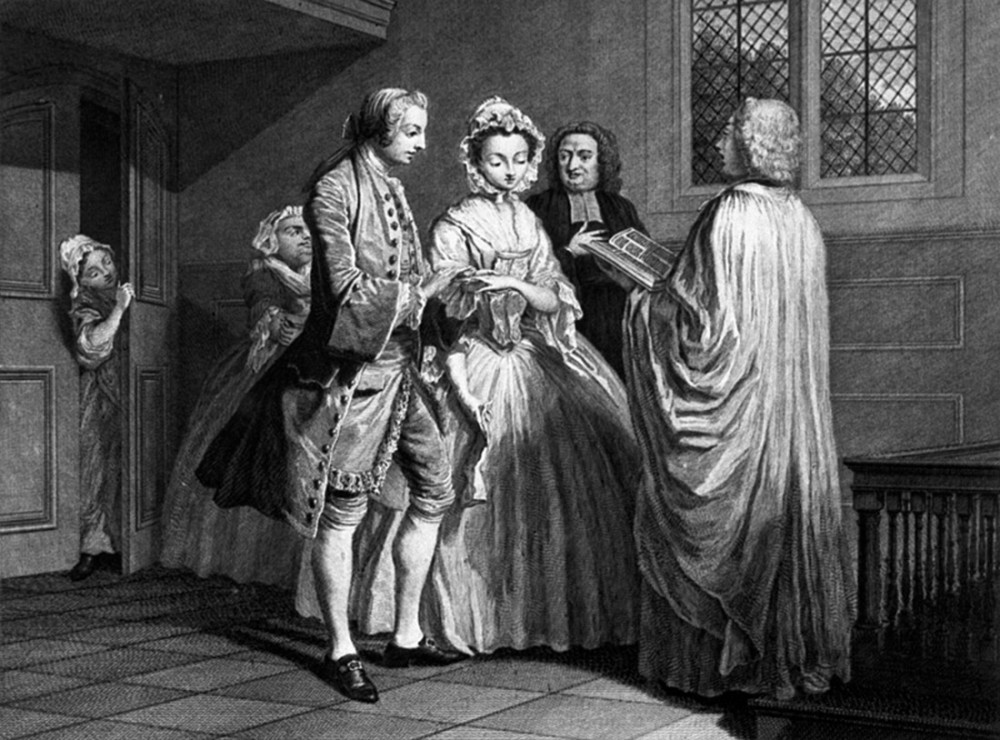 Britain relied on the colonies as source of raw materials, such as lumber and tobacco. Americans engaged with new forms of trade and financing that increased their ability to buy British-made goods. But the ways in which colonists paid for these goods varied sharply from those in Britain. When settlers first arrived in North America, they typically carried very little “hard” or metallic British money with them. Discovering no precious metals (and lacking the crown’s authority to mint coins), colonists relied on barter and non-traditional forms of exchange, including everything from nails to the wampum used by Native American groups in the Northeast. To deal with the lack of currency, many colonies resorted to “commodity money,” which varied from place to place. In Virginia, for example, the colonial legislature stipulated a rate of exchange for tobacco, standardizing it as a form of “money” in the colony. Commodities could be cumbersome and difficult to transport, so a system of notes developed, allowing individuals to deposit a certain amount of tobacco in a warehouse and receive a note bearing the value of the deposit that could be traded as money. In 1690, colonial Massachusetts became the first colony, as well as the first place in the Western world, to issue paper bills to be used as money. These notes, called bills of credit, were issued for finite periods of time on the colony’s credit and varied in denomination from quite small to large enough to cover major transactions.

While these notes provided colonists with a much-needed medium for exchange, it was not without its problems. Currency that worked in Virginia might be worthless in Pennsylvania. Colonists and officials back in Britain debated whether or not it was right or desirable to use mere paper, as opposed to gold or silver, as a medium of exchange. Paper money tended to lose value quicker than coins and was often counterfeited. These problems, as well as British merchants’ reluctance to accept depreciated paper notes, caused the Board of Trade to restrict the uses of paper money in the Currency Acts of 1751 and 1763. Paper money was not the only medium of exchange, however. Colonists also made use of metal coins. Barter and the extension of credit – which could take the form of bills of exchange, akin to modern-day personal checks – remained important forces throughout the colonial period. Trade between colonies was greatly hampered by the lack of standardized money. Currency that worked in Virginia might be worthless in Pennsylvania.

To encourage consumers, businesses on both sides of the Atlantic advertised the variety of goods, their quality, and the ease of obtaining credit. The consistent availability of credit allowed families of modest means to buy consumer items previously available only to elites. Cheap consumption allowed middle class Americans to match many of the trends in clothing, food, and household décor that traditionally marked the wealthiest, aristocratic classes. Provincial Americans, often seen by their London peers as less cultivated or “backwater,” could think of themselves as lords and ladies of their own communities through their ability to purchase and display British-made goods. Visiting the home of a successful businessman in Boston, John Adams described “the Furniture, which alone cost a thousand Pounds sterling. A seat it is for a noble Man, a Prince. The Turkey Carpets, the painted Hangings, the Marble Table, the rich Beds with crimson Damask Curtains and Counterpins, the beautiful Chimney Clock, the Spacious Garden, are the most magnificent of any Think I have seen.” But many Americans worried about the consequences of rising consumerism. A writer for The Boston Evening Post remarked on this new practice purchasing status: “For ‘tis well known how Credit is a mighty inducement with many People to purchase this and the other Thing which they may well enough do without.” Americans became more likely to find themselves in debt, whether to their local shopkeeper or a prominent London merchant, creating new feelings of dependence.

Of course, the thirteen continental colonies were not the only British colonies in the Western hemisphere. In fact, they were considerably less important to the Crown than the sugar producing islands of the Caribbean, including Jamaica, Barbados, the Leeward Islands, Grenada, St. Vincent, and Dominica. Though separated from the continent by the Caribbean Sea, these British colonies were inextricably connected to the continental colonies through commerce. Caribbean plantations dedicated nearly all of their land to the wildly profitable crop of sugar cane, so North American colonies sold surplus food and raw materials to these wealthy island colonies. Lumber was in high demand, especially in Barbados where planters nearly deforested the island to make room for sugar plantations. To compensate for a lack of lumber, Barbadian colonists ordered house frames from New England. These prefabricated frames were sent via ships where planters transported them to their plantations. Caribbean colonists also relied on the continental colonies for livestock, purchasing cattle and horses.

Connections between the Caribbean and North America benefitted both sides. Those living on the continent relied on the Caribbean colonists to satisfy their craving for sugar and other goods like mahogany. British colonists in the Caribbean began cultivating sugar in the 1640s, and sugar took the Atlantic World by storm. In fact, by 1680, sugar exports from the tiny island of Barbados valued more than the total exports of all the continental colonies. Jamaica, acquired by the Crown in 1655, surpassed Barbados in sugar production toward the end of the seventeenth century. North American colonists, like Britons around the world, craved sugar to sweeten their tea and food. Colonial elites also sought to decorate their parlors and dining rooms with the silky, polished surfaces of rare mahogany as opposed to local wood. To meet this newfound demand, furniture makers from North America traveled to the Caribbean to acquire mahogany that was then transformed into exquisite furniture. 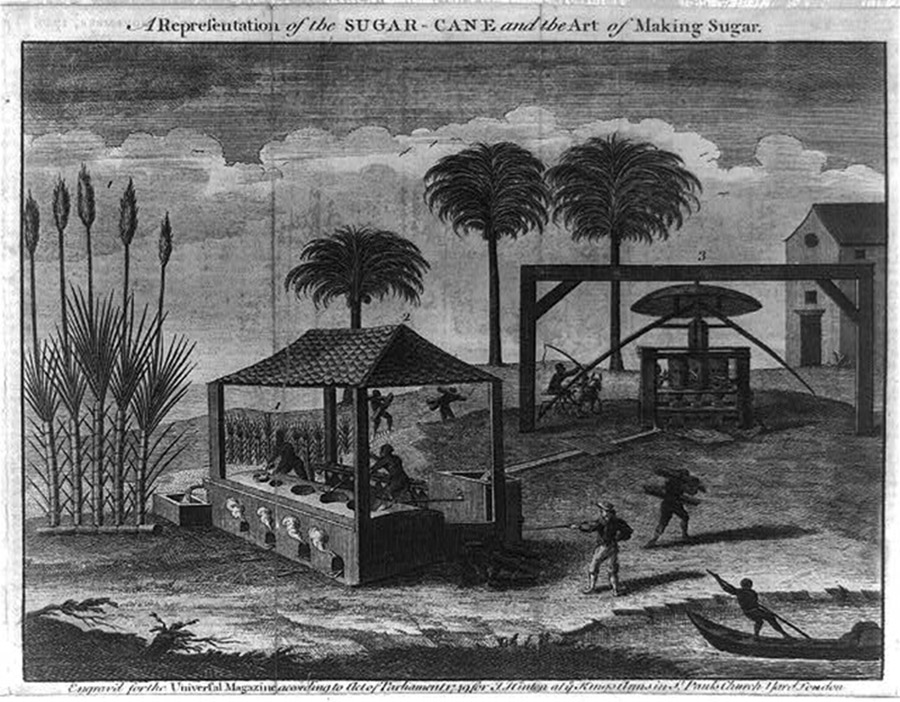 John Hinton, “A representation of the sugar-cane and the art of making sugar,” 1749. Library of Congress.

These systems of trade all existed with the purpose of enriching Great Britain. To ensure that profits ended up in Britain, Parliament issued taxes on trade called Navigation Acts. Through these taxes, consumption became intertwined with politics. Prior to 1763, Britain found that enforcing the regulatory laws they passed was difficult and often cost them more than the duty revenue they would bring in. As a result, colonists found it relatively easy to trade on their own terms, whether that was with foreign nations, pirates, or smugglers. Customs officials were easily bribed and it was not uncommon to see Dutch, French, or West Indies ships laden with prohibited goods in American ports. When smugglers were caught, their American peers often acquitted them. British officials estimated that nearly £700,000 of illicit goods was brought into the American colonies annually. Pirates, or what colonists considered privateers, also helped to perpetuate the illegal trading activities by providing a buffer between merchants and foreign ships.

Beginning with the Sugar Act in 1764, and continuing with the Stamp Act and the Townshend Duties, Parliament levied taxes on sugar, paper, lead, glass, and tea, all products that contributed to colonists’ sense of gentility. In response, patriots organized non-importation agreements. They reverted to their domestic products, making items such as homespun cloth a political statement. A writer in The Essex Gazette in 1769 proclaimed, “I presume there never was a Time when, or a Place where, the Spinning Wheel could more influence the Affairs of Men, than at present.”

The consumer revolution fueled the growth of colonial cities. Cities in colonial America were crossroads for the movement of people and goods. One in twenty colonists lived in cities by 1775. Some cities grew organically over time, while others were planned from the start. New York and Boston’s seventeenth-century street plans reflected the haphazard arrangement of medieval cities in Europe. In other cities like Philadelphia and Charleston, civic leaders laid out urban plans according to calculated systems of regular blocks and squares. Planners in Annapolis and Williamsburg also imposed regularity and order over their city streets through the placement of government, civic, and educational buildings.

By 1775, Boston, Newport, New York, Philadelphia, and Charleston were the five largest cities in British North America. Philadelphia, New York, Boston, and Charleston had populations of approximately 40,000; 25,000; 16,000; and 12,000 people, respectively. Urban society was highly stratified. At the base of the social ladder were the laboring classes, which included both enslaved and free persons ranging from apprentices to master craftsmen. Next came the middling sort: shopkeepers, artisans, and skilled mariners. Above them stood the merchant elites who tended to be actively involved in the city’s social and political affairs, as well as in the buying, selling, and trading of goods. Enslaved men and women had a visible presence in both northern and southern cities.

In port cities, slaves often worked in skilled trades, distilleries, shipyards, lumberyards, and ropewalks. Between 1725 and 1775, slavery became increasingly significant in the northern colonies as urban residents sought greater participation in the maritime economy. Massachusetts was the first slave-holding colony in New England. New York traced its connections to slavery and the slave trade back to the Dutch settlers of New Netherland in the seventeenth century. Philadelphia also became an active site of the Atlantic slave trade, and slaves accounted for nearly 8% of the city’s population in 1770. In southern cities, including Charleston, urban slavery played an important role in the market economy. Slaves, both rural and urban, made up the majority of the laboring population on the eve of the American Revolution.