Andrew Jackson’s first term was full of controversy. For all of his reputation as a military and political warrior, however, the most characteristic struggle of his presidency was financial. As president, he waged a “war” against the Bank of the United States.

The charter of the controversial national bank that Congress had established as part of Alexander Hamilton’s financial plan expired in 1811. But five years later, Congress had given a new charter to the Second Bank of the United States. Headquartered in Philadelphia, the bank was designed to stabilize the growing American economy. By requiring other banks to pay their debts promptly in gold, it was supposed to prevent them from issuing too many paper banknotes that could drop suddenly in value. Of course, the Bank of the United States was also supposed to reap a healthy profit for its private stockholders, like the Philadelphia banker Stephen Girard and the New York merchant John Jacob Astor.

Though many Republicans had supported the new bank, some never gave up their Jeffersonian suspicion that such a powerful institution was dangerous to the republic. Andrew Jackson was one of the skeptics. He and many of his supporters blamed the bank for the Panic of 1819, which had become a severe economic depression. The national bank had made that crisis worse, first by lending irresponsibly and then, when the panic hit, by hoarding gold currency to save itself at the expense of smaller banks and their customers. Jackson’s supporters also believed the bank had corrupted many politicians by giving them financial favors.

In 1829, after a few months in office, Jackson set his sights on the bank and its director, Nicholas Biddle. Jackson became more and more insistent over the next three years as Biddle and the bank’s supporters fought to save it. A visiting Frenchman observed that Jackson had “declared a war to the death against the Bank,” attacking it “in the same cut-and-thrust style” that he had once fought the Indians and the British. For Jackson, the struggle was a personal crisis. “The Bank is trying to kill me,” he told Martin Van Buren, “but I will kill it!”

The bank’s charter was not due for renewal for several years, but in 1832, while Jackson was running for re-election, Congress held an early vote to reauthorize the Bank of the United States. The president vetoed the bill. 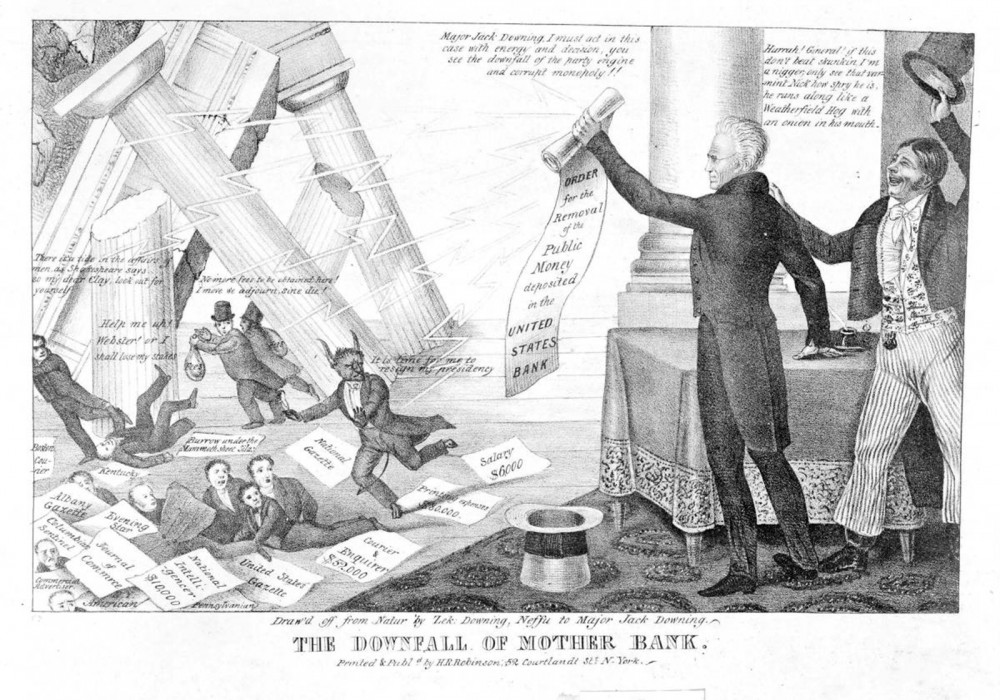 “The bank,” Andrew Jackson told Martin Van Buren, “is trying to kill me, but I will kill it!” That is just the unwavering force that Edward Clay depicted in this lithograph, which praised Jackson for terminating the Second Bank of the United States. Clay shows Nicholas Biddle as the Devil running away from Jackson as the bank collapses around him, his hirelings, and speculators. Edward W. Clay, c. 1832. Wikimedia.

In his veto message, Jackson called the bank unconstitutional and “dangerous to the liberties of the people.” The charter, he explained, didn’t do enough to protect the bank from its British stockholders, who might not have Americans’ interests at heart. In addition, Jackson wrote, the Bank of the United States was virtually a federal agency, but it had powers that were not granted anywhere in the Constitution. Worst of all, the bank was a way for well-connected people to get richer at everyone else’s expense. “The rich and powerful,” the president declared, “too often bend the acts of Government to their selfish purposes.” Only a strictly limited government, Jackson believed, would treat people equally.

Although its charter would not be renewed, the Bank of the United States could still operate for several more years. So in 1833, to diminish its power, Jackson also directed his cabinet to stop depositing federal funds in it. From now on, the government would do business with selected state banks instead. Critics called them Jackson’s “pet banks.”

Jackson’s bank veto set off fierce controversy. Opponents in Philadelphia held a meeting and declared that the president’s ideas were dangerous to private property. Jackson, they said, intended to “place the honest earnings of the industrious citizen at the disposal of the idle”—in other words, redistribute wealth to lazy people—and become a “dictator.”  A newspaper editor in Maine said that Jackson was trying to set “the poor against the rich,” perhaps in order to take over as a military tyrant. But Jackson’s supporters praised him. Pro-Jackson newspaper editors wrote that he had kept a “monied aristocracy” from conquering the people.

By giving President Jackson a vivid way to defy the rich and powerful, or at least appear to do so, the Bank War gave his supporters a specific “democratic” idea to rally around. More than any other issue, opposition to the national bank came to define their beliefs. And by leading Jackson to exert executive power so dramatically against Congress, the Bank War also helped his political enemies organize.

Increasingly, supporters of Andrew Jackson referred to themselves as Democrats. Under the strategic leadership of Martin Van Buren, they built a highly organized national political party, the first modern party in the United States. Much more than earlier political parties, this Democratic Party had a centralized leadership structure and a consistent ideological program for all levels of government. Meanwhile, Jackson’s enemies, mocking him as “King Andrew the First,” named themselves after the patriots of the American Revolution, the Whigs. 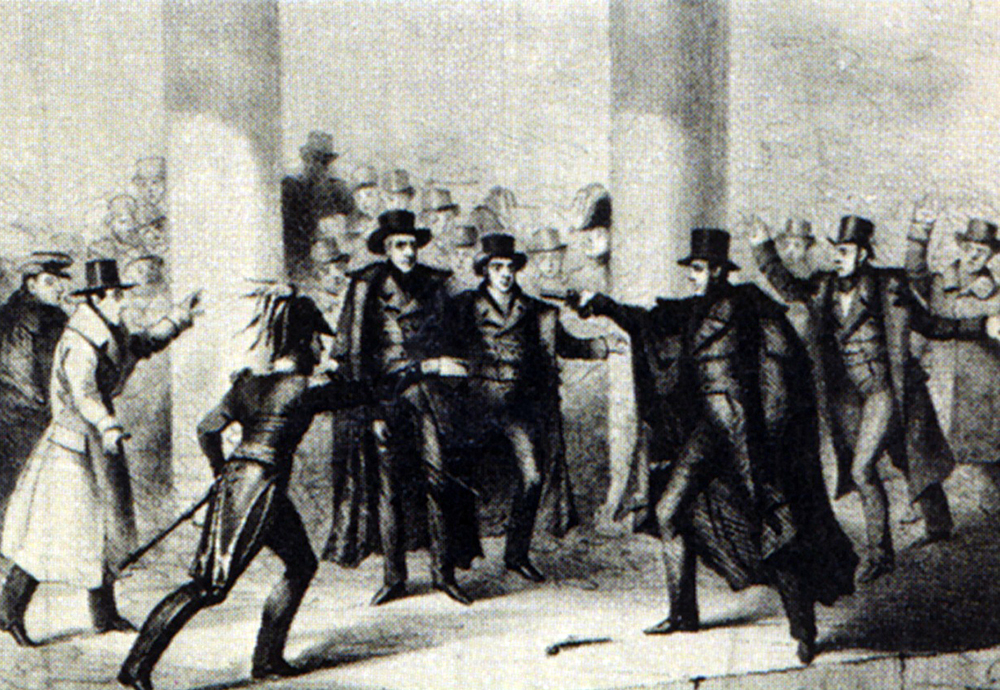 In 1835, Jackson became the first US President on whom an assassination attempt was carried out. While unsuccessful, it became another moment for Jackson to establish his persona as impulsive and passionate when, after the assassin’s gun misfired twice, Jackson beat the man senseless with a cane. Wikimedia.