Many plants reproduce asexually as well as sexually. In asexual reproduction, part of the parent plant is used to generate a new plant. Grafting, layering, and micropropagation are some methods used for artificial asexual reproduction. The new plant is genetically identical to the parent plant from which the stock has been taken. Asexually reproducing plants thrive well in stable environments.

Many different types of roots exhibit asexual reproduction Figure 1. The corm is used by gladiolus and garlic. Bulbs, such as a scaly bulb in lilies and a tunicate bulb in daffodils, are other common examples. A potato is a stem tuber, while parsnip propagates from a taproot. Ginger and iris produce rhizomes, while ivy uses an adventitious root (a root arising from a plant part other than the main or primary root), and the strawberry plant has a stolon, which is also called a runner.

Natural methods of asexual reproduction include strategies that plants have developed to self-propagate. Many plants—like ginger, onion, gladioli, and dahlia—continue to grow from buds that are present on the surface of the stem. In some plants, such as the sweet potato, adventitious roots or runners can give rise to new plants (Figure 2). In Bryophyllum and kalanchoe, the leaves have small buds on their margins. When these are detached from the plant, they grow into independent plants; or, they may start growing into independent plants if the leaf touches the soil. Some plants can be propagated through cuttings alone. 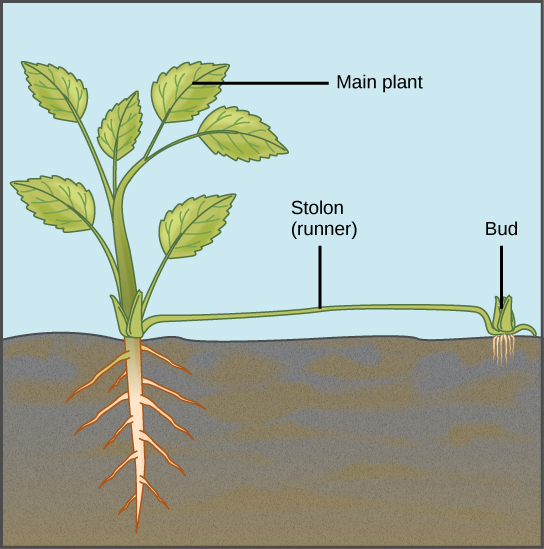 Figure 2. A stolon, or runner, is a stem that runs along the ground. At the nodes, it forms adventitious roots and buds that grow into a new plant. 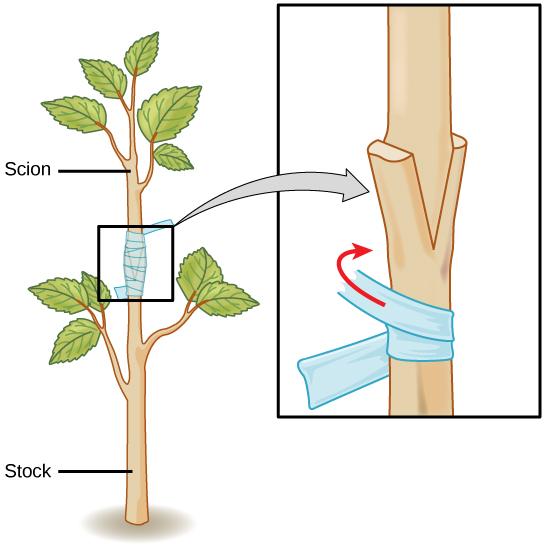 Figure 3. Grafting is an artificial method of asexual reproduction used to produce plants combining favorable stem characteristics with favorable root characteristics. The stem of the plant to be grafted is known as the scion, and the root is called the stock.

Grafting has long been used to produce novel varieties of roses, citrus species, and other plants. In grafting, two plant species are used; part of the stem of the desirable plant is grafted onto a rooted plant called the stock. The part that is grafted or attached is called the scion. Both are cut at an oblique angle (any angle other than a right angle), placed in close contact with each other, and are then held together Figure 3. Matching up these two surfaces as closely as possible is extremely important because these will be holding the plant together. The vascular systems of the two plants grow and fuse, forming a graft. After a period of time, the scion starts producing shoots, and eventually starts bearing flowers and fruits. Grafting is widely used in viticulture (grape growing) and the citrus industry. Scions capable of producing a particular fruit variety are grated onto root stock with specific resistance to disease. 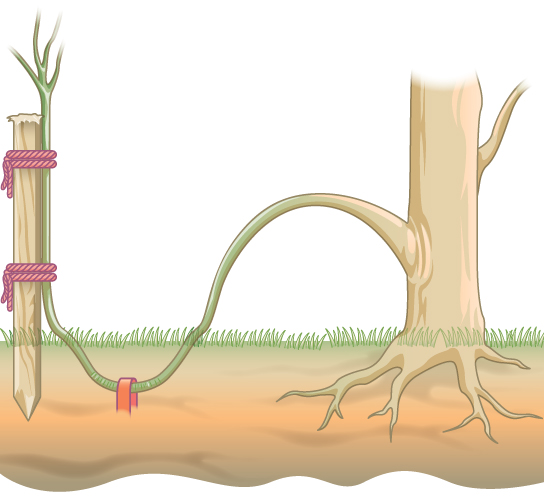 Figure 4. In layering, a part of the stem is buried so that it forms a new plant.

Layering is a method in which a stem attached to the plant is bent and covered with soil. Young stems that can be bent easily without any injury are preferred. Jasmine and bougainvillea (paper flower) can be propagated this way Figure 4.

Micropropagation (also called plant tissue culture) is a method of propagating a large number of plants from a single plant in a short time under laboratory conditions (Figure 5). This method allows propagation of rare, endangered species that may be difficult to grow under natural conditions, are economically important, or are in demand as disease-free plants. 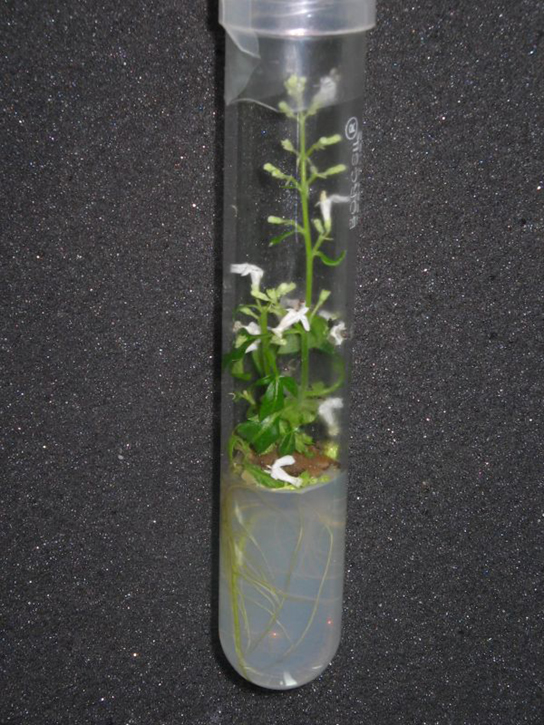 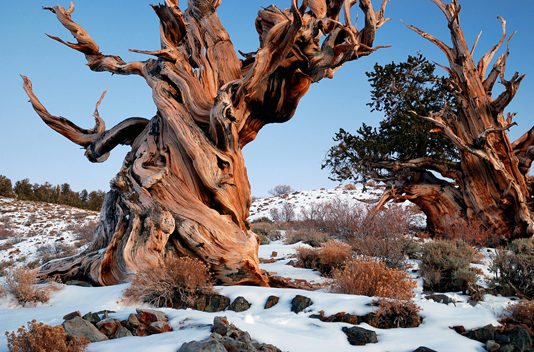 Figure 6. The bristlecone pine, shown here in the Ancient Bristlecone Pine Forest in the White Mountains of eastern California, has been known to live for 4,500 years. (credit: Rick Goldwaser)

The length of time from the beginning of development to the death of a plant is called its life span. The life cycle, on the other hand, is the sequence of stages a plant goes through from seed germination to seed production of the mature plant. Some plants, such as annuals, only need a few weeks to grow, produce seeds and die. Other plants, such as the bristlecone pine, live for thousands of years. Some bristlecone pines have a documented age of 4,500 years (Figure 6). Even as some parts of a plant, such as regions containing meristematic tissue—the area of active plant growth consisting of undifferentiated cells capable of cell division—continue to grow, some parts undergo programmed cell death (apoptosis). The cork found on stems, and the water-conducting tissue of the xylem, for example, are composed of dead cells.

In another classification based on flowering frequency, monocarpic plants flower only once in their lifetime; examples include bamboo and yucca. During the vegetative period of their life cycle (which may be as long as 120 years in some bamboo species), these plants may reproduce asexually and accumulate a great deal of food material that will be required during their once-in-a-lifetime flowering and setting of seed after fertilization. Soon after flowering, these plants die. Polycarpic plants form flowers many times during their lifetime. Fruit trees, such as apple and orange trees, are polycarpic; they flower every year. Other polycarpic species, such as perennials, flower several times during their life span, but not each year. By this means, the plant does not require all its nutrients to be channelled towards flowering each year.

As is the case with all living organisms, genetics and environmental conditions have a role to play in determining how long a plant will live. Susceptibility to disease, changing environmental conditions, drought, cold, and competition for nutrients are some of the factors that determine the survival of a plant. Plants continue to grow, despite the presence of dead tissue such as cork. Individual parts of plants, such as flowers and leaves, have different rates of survival. In many trees, the older leaves turn yellow and eventually fall from the tree. Leaf fall is triggered by factors such as a decrease in photosynthetic efficiency, due to shading by upper leaves, or oxidative damage incurred as a result of photosynthetic reactions. The components of the part to be shed are recycled by the plant for use in other processes, such as development of seed and storage. This process is known as nutrient recycling.

The aging of a plant and all the associated processes is known as senescence, which is marked by several complex biochemical changes. One of the characteristics of senescence is the breakdown of chloroplasts, which is characterized by the yellowing of leaves. The chloroplasts contain components of photosynthetic machinery such as membranes and proteins. Chloroplasts also contain DNA. The proteins, lipids, and nucleic acids are broken down by specific enzymes into smaller molecules and salvaged by the plant to support the growth of other plant tissues.

The complex pathways of nutrient recycling within a plant are not well understood. Hormones are known to play a role in senescence. Applications of cytokinins and ethylene delay or prevent senescence; in contrast, abscissic acid causes premature onset of senescence.