Distribution of Sample Proportions (4 of 6)

The simulations on the previous page reinforce what we have observed about patterns in random sampling.

We can describe the sampling distribution with a mathematical model that has these same features.

The Sampling Distribution of Sample Proportions

For a categorical variable, imagine a population with a proportion p of successes. (For example, for the variable gender, imagine a population of part-time college students with p = 0.60 female. Note that a success is the category of interest. It is what we are counting. Here a success is a female.) We create a mathematical model that describes the sample proportions from all possible random samples of size n from this population. The model has the following center, spread, and shape.

Center: Mean of the sample proportions is p, the population proportion.

Shape: A normal model is a good fit if the expected number of successes and failures is at least 10. We can translate these conditions into formulas: [latex]np≥10\text{}\mathrm{and}\text{}n(1-p)≥10.[/latex]

Applying the Model for the Sampling Distribution 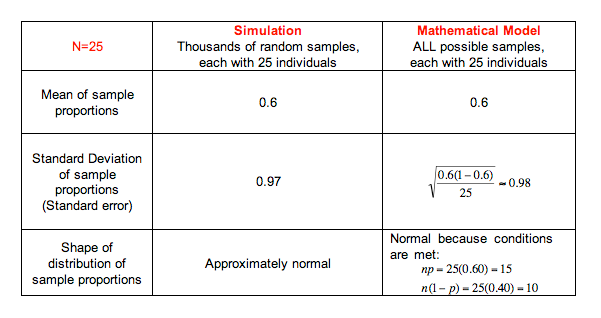 According to the National Postsecondary Student Aid Study conducted by the U.S. Department of Education in 2008, 62% of graduates from public universities had student loans.