Describe the distribution of quantitative data using a dotplot.

When we work with data, the data is usually in a table. In this form, we can easily see the variable value for each individual. But when we analyze data, we are not focused on information about an individual. We want to describe a group of individuals. In data analysis, our goal is to describe patterns in the data and create a useful summary about a group. A table is not a useful way to view data because patterns are hard to see in a table. For this reason, our first step in data analysis is to create a graph of the distribution of the variable.

In a graph that summarizes the distribution of a variable, we can see

Here are two graphs of the variable protein for a group of breakfast cereals targeted at children.

In both graphs, the individuals and the variable are the same:

Let’s compare the graphs to determine which graph is a better summary of the distribution of protein. 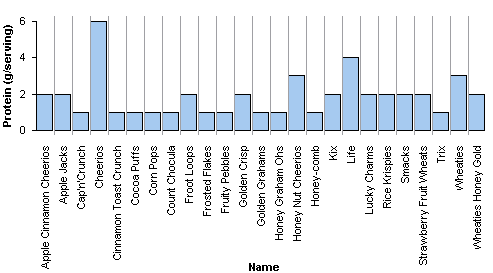 For example, how many cereals have 2 grams of protein in a serving? This graph does not make it easy to answer this question. We have to move across the graph and count the cereals with 2 grams of protein. In this way, a case-value graph is like a table. We cannot easily see patterns in the data or determine the number of individuals with a given variable value.

Here is a second graph of the same data. This graph is called a dotplot. A dotplot gives a better summary of the distribution of protein.

In a dotplot, each dot represents one individual. Here, each dot is a children’s cereal. The numbers on the horizontal axis are the variable values. The vertical axis gives the count of cereals. We can easily see that 10 children’s cereals have 2 grams of protein in a serving.

From the dotplot, we can easily describe the distribution of protein. Here are some observations about this distribution:

These observations are a good summary of the data.