Hypothesis Test for Difference in Two Population Proportions (1 of 6)

We did hypothesis tests in Inference for One Proportion. Each claim involved a single population proportion. Now we will test claims about a treatment effect or about a difference in population proportions, and we’ll see that the steps and the logic of the hypothesis test are the same. Before we get into the details, let’s practice identifying research questions and studies that involve two populations or two treatments with a categorical response variable. Here are some examples. 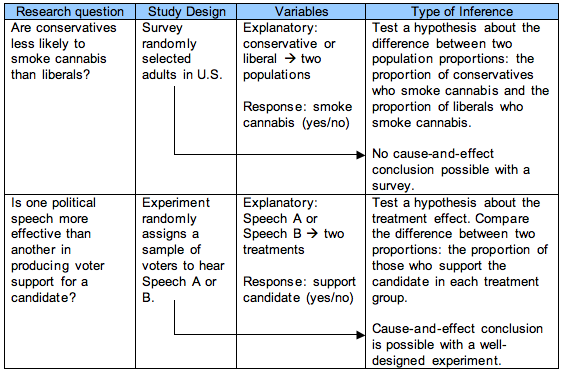 Whenever we test a hypothesis, we begin by stating null and alternative hypotheses.

The alternative hypothesis is one of the following:

Will early childhood education improve the likelihood of college attendance for poor children? Recall the experiment conducted by the Abecedarian (A-B-C-Darian) project in the 1970s. The study randomly assigned children to a control group (with no preschool) or a treatment group (with high-quality preschool).

To test the claim that the treatment increases the proportion of children who eventually attend college, we define a null and an alternative hypothesis.

The null hypothesis is always a statement of “no effect” or “no difference,” so we assume that these proportions are equal: p1 = p2. Their difference is therefore zero:

In this example, the null hypothesis says that the preschool treatment has no effect on the proportion of children who eventually go to college.

The alternative hypothesis reflects our claim of a treatment effect. We chose to make p1 connected to the treatment, so our claim says that p1 is greater than p2 (p1 > p2). This translates into a difference that is greater than zero. It is positive:

Establishing the null and alternative hypotheses in a comparison of two proportions is an important part of the hypothesis testing process. The next few activities provide an opportunity to practice this skill.