What Can Go Wrong: Two Types of Errors

Statistical investigations involve making decisions in the face of uncertainty, so there is always some chance of making a wrong decision. In hypothesis testing, two types of wrong decisions can occur.

If the null hypothesis is true, but we reject it, the error is a type I error.

If the null hypothesis is false, but we fail to reject it, the error is a type II error.

The following table summarizes type I and II errors.

Type I and type II errors are not caused by mistakes. These errors are the result of random chance. The data provide evidence for a conclusion that is false. It’s no one’s fault!

Data Use on Smart Phones 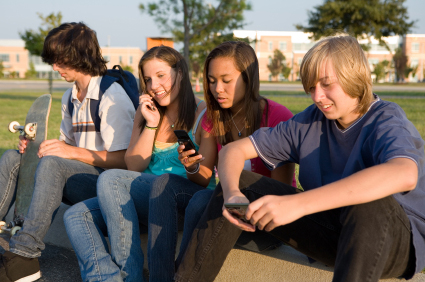 In a previous example, we looked at a hypothesis test about data usage on smart phones. The researcher investigated the claim that the mean data usage for all teens is greater than 62 MBs. The sample mean was 75 MBs. The P-value was approximately 0.023. In this situation, the P-value is the probability that we will get a sample mean of 75 MBs or higher if the true mean is 62 MBs.

White Male Support for Obama in 2012

In a previous example, we conducted a hypothesis test using poll results to determine if white male support for Obama in 2012 will be less than 40%. Our poll of white males showed 35% planning to vote for Obama in 2012. Based on the sampling distribution, we estimated the P-value as 0.078. In this situation, the P-value is the probability that we will get a sample proportion of 0.35 or less if 0.40 of the population of white males support Obama.

At the 5% level, the poll did not give strong enough evidence for us to conclude that less than 40% of white males will vote for Obama in 2012.

Which type of error is possible in this situation? If, in fact, it is true that less than 40% of this population support Obama, then the data led to a type II error: failing to reject a null hypothesis that is false. In other words, we failed to accept an alternative hypothesis that is true.

What Is the Probability That We Will Make a Type I Error?

In general, the probability of a type I error is α.

What Is the Probability That We Will Make a Type II Error?

In the long run, a fair coin lands heads up half of the time. (For this reason, a weighted coin is not fair.) We conducted a simulation in which each sample consists of 40 flips of a fair coin. Here is a simulated sampling distribution for the proportion of heads in 2,000 samples. Results ranged from 0.25 to 0.75. 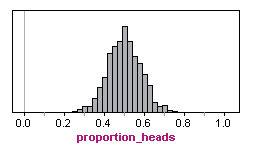 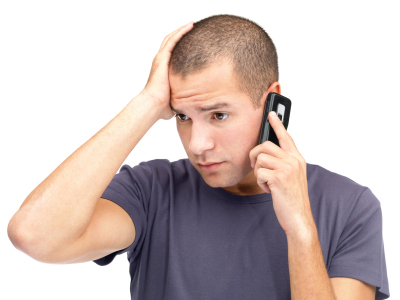 The following is an excerpt from a 1999 New York Times article titled “Cell phones: questions but no answers,” as referenced by David S. Moore in Basic Practice of Statistics (4th ed., New York: W. H. Freeman, 2007):

This is an example of a probable type I error. Suppose we conducted 20 hypotheses tests with the null hypothesis “Cell phone use is not associated with cancer” at the 5% level. We expect 1 in 20 (5%) to give significant results by chance alone when there is no association between cell phone use and cancer. So the conclusion that this one type of cancer is related to cell phone use is probably just a result of random chance and not an indication of an association.

Click here to see a fun cartoon that illustrates this same idea.

How Many People Are Telepathic?

Telepathy is the ability to read minds. Researchers used Zener cards in the early 1900s for experimental research into telepathy.

In a telepathy experiment, the “sender” looks at 1 of 5 Zener cards while the “receiver” guesses the symbol. This is repeated 40 times, and the proportion of correct responses is recorded. Because there are 5 cards, we expect random guesses to be right 20% of the time (1 out of 5) in the long run. So in 40 tries, 8 correct guesses, a proportion of 0.20, is common. But of course there will be variability even when someone is just guessing. Thirteen or more correct in 40 tries, a proportion of 0.325, is statistically significant at the 5% level. When people perform this well on the telepathy test, we conclude their performance is not due to chance and take it as an indication of the ability to read minds.

A Courtroom Analogy for Hypothesis Tests

When a jury makes a decision, it has only two possible verdicts:

The two possible verdicts are similar to the two conclusions that are possible in a hypothesis test.

How does the courtroom analogy relate to type I and type II errors?

Type I error: The jury convicts an innocent person. By analogy, we reject a true null hypothesis and accept a false alternative hypothesis.

Type II error: The jury says a person is not guilty when he or she really is. By analogy, we fail to reject a null hypothesis that is false. In other words, we do not accept an alternative hypothesis when it is really true.

In this section, we introduced the four-step process of hypothesis testing:

Because the hypothesis test is based on probability, random selection or assignment is essential in data production.

Inference is based on probability, so there is always uncertainty. Although we may have strong evidence against it, the null hypothesis may still be true. If this is the case, we have a type I error. Similarly, even if we fail to reject the null hypothesis, it does not mean the alternative hypothesis is false. In this case, we have a type II error. These errors are not the result of a mistake in conducting the hypothesis test. They occur because of random chance.