Beyond One Standard Deviation from the Mean

Earlier we stated that for all normal curves, the area within 1 standard deviation of the mean will equal 0.68. From this fact, we can see that the area outside of this region equals 1 − 0.68 = 0.32. And since normal curves are symmetric, this outside area of 0.32 is evenly divided between the two outer tails. So the area of each tail = 0.16. 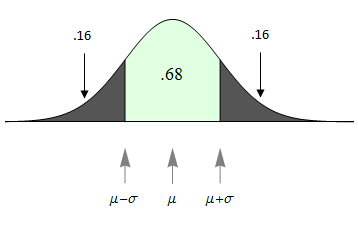 Before leaving this example, we highlight one more geometric fact about normal curves. Look at the arrows pointing at the normal curve in the following figure. 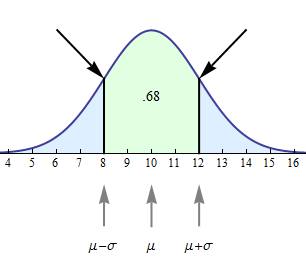 At these points, the curve changes the direction of its bend and goes from bending upward to bending downward, or vice versa. A point like this on a curve is called an inflection point. Every normal curve has inflection points at exactly 1 standard deviation on each side of the mean.

These three facts together are called the empirical rule for normal curves.

Let’s take a moment to look a bit deeper at what the empirical rule tells us.