Module: Relationships in Categorical Data with Intro to Probability

What is your perception of your own body? Do you feel that you are overweight, underweight, or about right? A random sample of 1,200 U.S. college students answered this question as part of a larger survey. The following table shows part of the responses:

Here are the questions we investigate:

Recall from Summarizing Data Graphically and Numerically that in a graph that summarizes the distribution of a quantitative variable, we can see

Here we use a table instead of a graph to summarize the distribution of a categorical variable. We create a table so we can see

Here is the table for our example:

We can use a stacked bar chart to display the distribution of the body image variable. Note that this distribution is completely described by the three percentages 9.2%, 19.6%, and 71.3%, which correspond to the three categories of the body image variable: “underweight,” “overweight,” and “about right.” The percentages add to 100% because all 1,200 individual responses fall into one of these three categories. (Note that the percentages actually add up to 99.9% because we rounded percentages to three decimal places.) 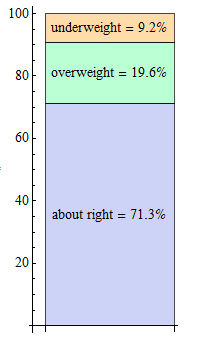 Now that we have summarized the distribution of values in the body image variable, let’s go back and interpret the results in the context of the questions we posed.

Once we’ve interpreted the results, another interesting question arises: If we separate our sample by gender and compare the male and female responses, will we find a similar distribution across body image categories? Or is there a difference based on gender?

Answering these questions requires us to examine the relationship between two categorical variables: gender and body image. We want to determine if gender explains the differences in body image responses. Therefore,

Here is part of the raw data for body image and gender of each student:

Once again, the raw data is a long list of 1,200 responses. We need to organize the information in a table so we can more easily compare the results for females and males. To summarize the relationship between two categorical variables, we create a display called a two-way table.

Here is the two-way table for our example:

Let’s take a closer look at this table:

We also added a row at the bottom and a column at the right, which we call the margins of the table. The numbers in the margins are totals for each row or column.

Likewise, in the next table, look at the numbers in the Overweight column and note that their sum, 163 + 72 = 235, is displayed in the margin at the bottom of the table labeled Column Totals. There are 235 students in the sample who answered “overweight” to the body image question.

Where a row and column cross, we see the number of individuals who fit both descriptions: a particular gender and a particular body image. It may be helpful to think of the six inner cells as six rooms filled with the 1,200 students from the sample. For example, in one room are the 72 males who think of themselves as overweight. In another room, we have 37 females who think of themselves as underweight. (Maybe they should have a potluck and get to know each other.)

So far we have organized the raw data in a much more informative display – the two-way table. But we have not answered our primary question: Is body image related to gender?

We do this in the next example.

Is Body Image Related to Gender?

We can interpret percentages as “a number out of 100,” so by converting to percentages, we are reporting the results as though there are 100 females and 100 males. We can see that a higher percentage of females feel “about right” about their body weight.

In general, we need to supplement our display, the two-way table, with numeric summaries that allow us to compare the distributions. Therefore, we always convert counts to percentages.

Here is a side-by-side display comparing the conditional body image distributions for females and males. 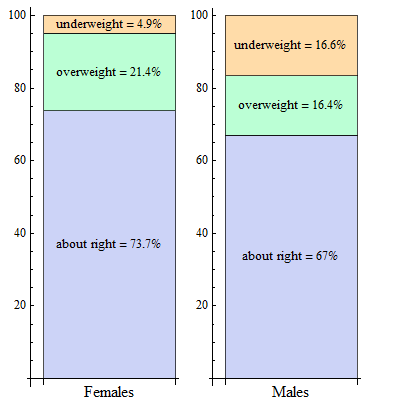 Now that we summarized the relationship between the categorical variables gender and body image, we use the next activity to interpret the results in the context of the questions we posed.

At the start of this example, we asked the following questions:

If we separate our sample by gender and compare the male and female responses, will we find a similar distribution across body image categories? Or is there a difference based on gender?

As a result of our analysis, we know that the conditional distributions for males and females for body image are not the same. And there is enough of a difference to believe that these two categorical variables are in fact related.

In the next activity, we practice investigating the relationship between two different categorical variables.

We investigate this question in the next activity: Is there a relationship between smoking rates and college programs? Researchers sent an online health behavior survey to 25,000 college students in 2009. The following table summarizes results based on 6,055 student responses. (C. J. Berg, C. M. Klatt, J. L. Thomas, J. S. Ahluwalia, and L. C. An, “The Relationship of Field of Study to Current Smoking Status among College Students,” College Student Journal 43(3):744–754, 2009.)

In the next activity, we investigate whether health insurance coverage differs by geographic region. The U.S. government collects information on Americans who do not have health insurance. Here is the data:

The relationship between two categorical variables is summarized using