Viruses of all shapes and sizes consist of a nucleic acid core, an outer protein coating or capsid, and sometimes an outer envelope.

Describe the relationship between the viral genome, capsid, and envelope

Viruses are acellular, meaning they are biological entities that do not have a cellular structure. Therefore, they lack most of the components of cells, such as organelles, ribosomes, and the plasma membrane. A virion consists of a nucleic acid core, an outer protein coating or capsid, and sometimes an outer envelope made of protein and phospholipid membranes derived from the host cell. The capsid is made up of protein subunits called capsomeres. Viruses may also contain additional proteins, such as enzymes. The most obvious difference between members of viral families is their morphology, which is quite diverse. An interesting feature of viral complexity is that host and virion complexity are uncorrelated. Some of the most intricate virion structures are observed in bacteriophages, viruses that infect the simplest living organisms: bacteria.

Viruses come in many shapes and sizes, but these are consistent and distinct for each viral family. In general, the shapes of viruses are classified into four groups: filamentous, isometric (or icosahedral), enveloped, and head and tail. Filamentous viruses are long and cylindrical. Many plant viruses are filamentous, including TMV (tobacco mosaic virus). Isometric viruses have shapes that are roughly spherical, such as poliovirus or herpesviruses. Enveloped viruses have membranes surrounding capsids. Animal viruses, such as HIV, are frequently enveloped. Head and tail viruses infect bacteria. They have a head that is similar to icosahedral viruses and a tail shape like filamentous viruses.

Many viruses use some sort of glycoprotein to attach to their host cells via molecules on the cell called viral receptors. For these viruses, attachment is a requirement for later penetration of the cell membrane, allowing them to complete their replication inside the cell. The receptors that viruses use are molecules that are normally found on cell surfaces and have their own physiological functions. Viruses have simply evolved to make use of these molecules for their own replication. 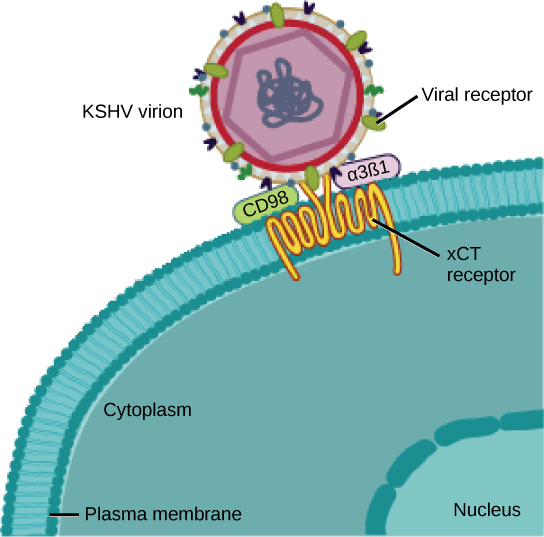 Example of a virus attaching to its host cell: The KSHV virus binds the xCT receptor on the surface of human cells. This attachment allows for later penetration of the cell membrane and replication inside the cell.

Overall, the shape of the virion and the presence or absence of an envelope tell us little about what disease the virus may cause or what species it might infect, but they are still useful means to begin viral classification. Among the most complex virions known, the T4 bacteriophage, which infects the Escherichia coli bacterium, has a tail structure that the virus uses to attach to host cells and a head structure that houses its DNA. Adenovirus, a non-enveloped animal virus that causes respiratory illnesses in humans, uses glycoprotein spikes protruding from its capsomeres to attach to host cells. Non-enveloped viruses also include those that cause polio (poliovirus), plantar warts (papillomavirus), and hepatitis A (hepatitis A virus). 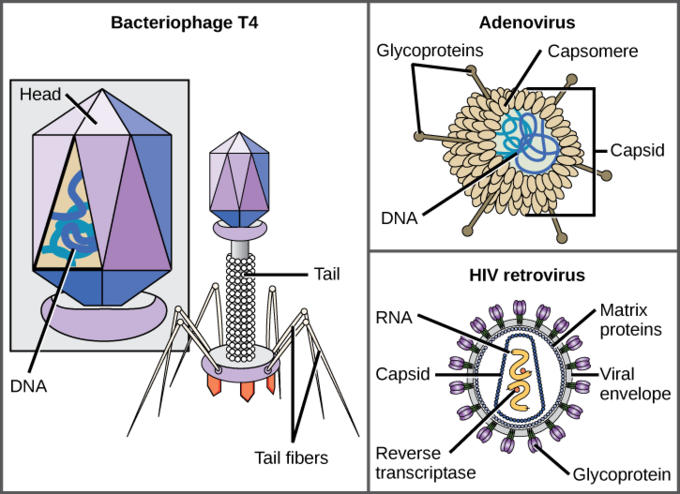 Enveloped virions like HIV consist of nucleic acid and capsid proteins surrounded by a phospholipid bilayer envelope and its associated proteins. Glycoproteins embedded in the viral envelope are used to attach to host cells. Other envelope proteins include the matrix proteins that stabilize the envelope and often play a role in the assembly of progeny virions. Chicken pox, influenza, and mumps are examples of diseases caused by viruses with envelopes. Because of the fragility of the envelope, non-enveloped viruses are more resistant to changes in temperature, pH, and some disinfectants than are enveloped viruses.

Unlike nearly all living organisms that use DNA as their genetic material, viruses may use either DNA or RNA. The virus core contains the genome or total genetic content of the virus. Viral genomes tend to be small, containing only those genes that encode proteins that the virus cannot obtain from the host cell. This genetic material may be single- or double-stranded. It may also be linear or circular. While most viruses contain a single nucleic acid, others have genomes that have several, called segments.

In DNA viruses, the viral DNA directs the host cell’s replication proteins to synthesize new copies of the viral genome and to transcribe and translate that genome into viral proteins. DNA viruses cause human diseases, such as chickenpox, hepatitis B, and some venereal diseases, like herpes and genital warts.

RNA viruses contain only RNA as their genetic material. To replicate their genomes in the host cell, the RNA viruses encode enzymes that can replicate RNA into DNA, which cannot be done by the host cell. These RNA polymerase enzymes are more likely to make copying errors than DNA polymerases and, therefore, often make mistakes during transcription. For this reason, mutations in RNA viruses occur more frequently than in DNA viruses. This causes them to change and adapt more rapidly to their host. Human diseases caused by RNA viruses include hepatitis C, measles, and rabies.

Viruses have a variety of shapes and structures.

Viruses display a wide diversity of shapes and sizes, called morphologies. In general, there are five main morphological virus types: 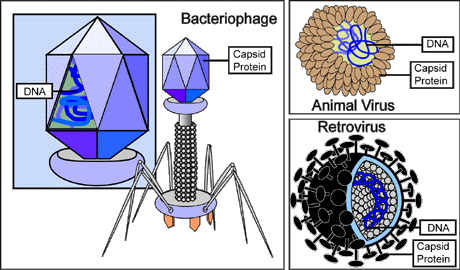 Viral structure: An outline of the structures of some common viral types.

A complete virus particle, known as a virion, consists of nucleic acid surrounded by a protective coat of protein called a capsid. These are formed from identical protein subunits called capsomeres. Viruses can have a lipid “envelope” derived from the host cell membrane. The capsid is made from proteins encoded by the viral genome and its shape serves as the basis for morphological distinction. Virally coded protein subunits will self-assemble to form a capsid, in general requiring the presence of the virus genome. Complex viruses code for proteins that assist in the construction of their capsid. Proteins associated with nucleic acid are known as nucleoproteins, and the association of viral capsid proteins with viral nucleic acid is called a nucleocapsid. The capsid and entire virus structure can be mechanically (physically) probed through atomic force microscopy.

viruses are much smaller than bacteria. Most viruses that have been studied have a diameter between 20 and 300 nanometers. Some filoviruses have a total length of up to 1400 nm; their diameters are only about 80 nm. Most viruses, such as virions, cannot be seen with an optical microscope, so scanning and transmission electron microscopes are used to visualize them.

To increase the contrast between viruses and the background, electron-dense “stains” are used. These are solutions of salts of heavy metals, such as tungsten, that scatter the electrons from regions covered with the stain. When virions are coated with stain (positive staining), fine detail is obscured. Negative staining overcomes this problem by staining the background only.

Complex viruses are often asymetrical or symetrical in combination with other structures such as a tail.

Break down the differences between complex and asymmetrical viruses

Viruses have many structural shapes, often falling into certain categories. While some have symmetrical shapes, viruses with asymmetrical structures are referred to as “complex. ” These viruses possess a capsid that is neither purely helical nor purely icosahedral, and may possess extra structures such as protein tails or a complex outer walls.

Some bacteriophages, such as Enterobacteria phage T4, have a complex structure consisting of an icosahedral head bound to a helical tail, which may have a hexagonal base plate with protruding protein tail fibers. This tail structure acts like a molecular syringe, attaching to the bacterial host and then injecting the viral genome into the cell.

T4 Bacteriophage: T4 is a bacteriophage that infects E. coli and is referred to as a complex virus. Although it has an icosahedral head, its tail makes it asymmetrical, or complex in terms of structure.

The poxviruses are large, complex viruses that have an unusual morphology. The viral genome is associated with proteins within a central disk structure known as a nucleoid. The nucleoid is surrounded by a membrane and two lateral bodies of unknown function. The virus has an outer envelope with a thick layer of protein studded over its surface. The whole virion is slightly pleiomorphic, ranging from ovoid to brick shape.

Mimivirus is the largest characterized virus, with a capsid diameter of 400 nm. Protein filaments measuring 100 nm project from the surface. The capsid appears hexagonal under an electron microscope, therefore the capsid is probably icosahedral. In 2011, researchers discovered a larger virus on the ocean floor off the coast of Las Cruces, Chile. Provisionally named Megavirus chilensis, it can be seen with a basic optical microscope.

Some viruses that infect archaea have complex structures unrelated to any other form of virus. These include a wide variety of unusual shapes, ranging from spindle-shaped structures, to viruses that resemble hooked rods, teardrops, or even bottles. Other archaeal viruses resemble the tailed bacteriophages, and can have multiple tail structures.