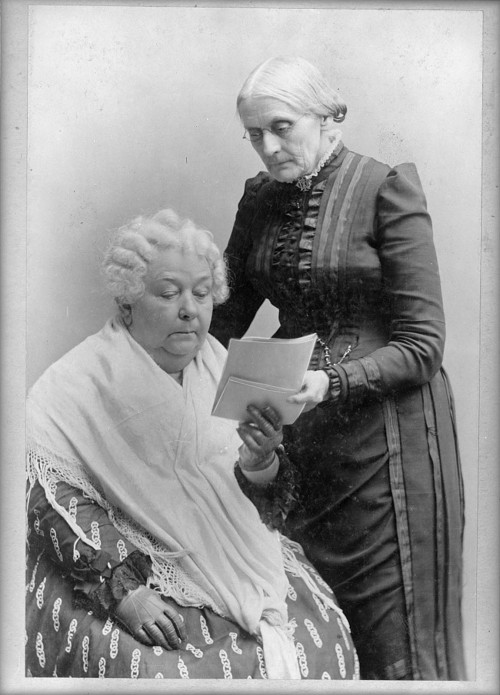 Susan B. Anthony and Elizabeth Cady Stanton maintained a strong and productive relationship for nearly half a century as they sought to secure political rights for women. While the fight for women’s rights stalled during the war, it sprung back to life as Anthony, Stanton, and others formed the American Equal Rights Association. “[Elizabeth Cady Stanton, seated, and Susan B. Anthony, standing, three-quarter length portrait],” between 1880 and 1902. Library of Congress.

Reconstruction involved more than the meaning of emancipation. Women also sought to redefine their roles within the nation and in their local communities. The abolitionist and women’s rights movements simultaneously converged and began to clash. In the South, both black and white women struggled to make sense of a world of death and change.In Reconstruction, leading women’s rights advocate Elizabeth Cady Stanton saw an unprecedented opportunity for disenfranchised groups—women as well as African Americans, northern and southern—to seize political rights. Stanton formed the Women’s Loyal National League in 1863, which petitioned Congress for a constitutional amendment abolishing slavery. The Thirteenth Amendment marked a victory not only for the antislavery cause, but also for the Loyal League, proving women’s political efficacy and the possibility for radical change. Now, as Congress debated the meanings of freedom, equality, and citizenship for former slaves, women’s rights leaders saw an opening to advance transformations in women’s status, too.On the tenth of May 1866, just one year after the war, the Eleventh National Women’s Rights Convention met in New York City to discuss what many agreed was an extraordinary moment, full of promise for fundamental social change. Elizabeth Cady Stanton presided over the meeting. Also in attendance were prominent abolitionists, with whom Stanton and other women’s rights leaders had joined forces in the years leading up to the war. Addressing this crowd of social reformers, Stanton captured the radical spirit of the hour: “now in the reconstruction,” she declared, “is the opportunity, perhaps for the century, to base our government on the broad principle of equal rights for all.”Stanton chose her universal language—“equal rights for all”—with intention, setting an agenda of universal suffrage for the activists. Thus, in 1866, the National Women’s Rights Convention officially merged with the American Antislavery Society to form the American Equal Rights Association (AERA). This union marked the culmination of the longstanding partnership between abolitionist and women’s rights advocates. 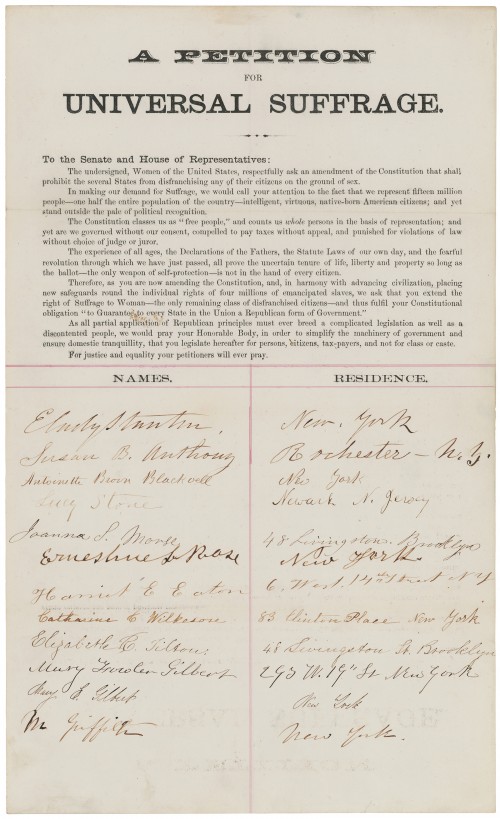 Elizabeth Cady Stanton, the great women’s rights and abolition activist, was one of the strongest forces in the universal suffrage movement. Her name can be seen at the top of this petition to extend suffrage to all regardless of sex, which was present to Congress on January 29, 1866. It did not pass, and women would not gain the vote for more than half a decade after Stanton and others signed this petition. “Petition of E. Cady Stanton, Susan B. Anthony, Lucy Stone, Antoinette Brown Blackwell, and Others Asking for an Amendment of the Constitution that Shall Prohibit the Several States from Disfranchising Any of Their Citizens on the Ground of Sex,” 1865. National Archives and Records Administration.

The AERA was split over whether black (male) suffrage should take precedence over universal suffrage given the political climate of the South. Some worried that political support for freedmen would be undermined by the pursuit of women’s suffrage. For example, AERA member Frederick Douglas insisted that the ballot was literally a “question of life and death” for southern black men, but not for women. Some African-American women challenged white suffragists in other ways; Frances Harper, for example, a free-born black woman living in Ohio, urged them to consider their own privilege as white and middle class. Universal suffrage, she argued, would not so clearly address the complex difficulties posed by racial, economic, and gender inequality.

These divisions came to a head early in 1867, as the AERA organized a campaign in Kansas to determine the fate of black and woman suffrage. Elizabeth Cady Stanton and her partner in the movement, Susan B. Anthony, made the journey to advocate universal suffrage. Yet they soon realized that their allies were distancing themselves from women’s suffrage in order to advance black enfranchisement. Disheartened, Stanton and Anthony allied instead with white supremacists that supported women’s equality. Many fellow activists were dismayed by Stanton and Anthony’s willingness to appeal to racism to advance their cause.

These tensions finally erupted over conflicting views of the Fourteenth and Fifteenth Amendments. Women’s rights leaders vigorously protested the Fourteenth Amendment. Although it established national citizenship for all persons born or naturalized in the United States, the amendment also introduced the word “male” into the Constitution for the first time. After the Fifteenth Amendment ignored “sex” as an unlawful barrier to suffrage, an omission that appalled Stanton, the AERA officially dissolved. Stanton and Anthony formed the National Woman Suffrage Association (NWSA), while those suffragists who supported the Fifteenth Amendment, regardless of its limitations, founded the American Woman Suffrage Association (AWSA).

The NWSA soon rallied around a new strategy: the ‘New Departure’. This new approach interpreted the Constitution as already guaranteeing women the right to vote. They argued that by nationalizing citizenship for all persons, and protecting all rights of citizens— including the right to vote—the Fourteenth and Fifteenth Amendments guaranteed women’s suffrage. Broadcasting the New Departure, the NWSA encouraged women to register to vote, which roughly seven hundred did between 1868 and 1872. Susan B. Anthony was one of them and was arrested but then acquitted in trial. In 1875, the Supreme Court addressed this constitutional argument: acknowledging women’s citizenship, but arguing that suffrage was not a right guaranteed to all citizens. This ruling not only defeated the New Departure, but also coincided with the Court’s generally reactionary interpretation of the Reconstruction Amendments, which significantly limited freedmen’s rights. Following this defeat, many suffragists like Stanton increasingly replaced the ideal of ‘universal suffrage’ with arguments about the virtue that white women would bring to the polls. These new arguments often hinged on racism and declared the necessity of white women voters to keep black men in check.

By the close of the decade, the promise of Reconstruction—of creating a more democratic society—was followed by a conservative backlash against equal rights.

Southern women also grappled with the effects of the war. The lines between refined white womanhood and degraded enslaved black femaleness were no longer so clearly defined. Moreover, during the war, southern white women had been called upon to do traditional man’s work–chopping wood and managing businesses. While white southern women decided whether and how to return to their prior status, African American women embraced new freedoms and a redefinition of womanhood. 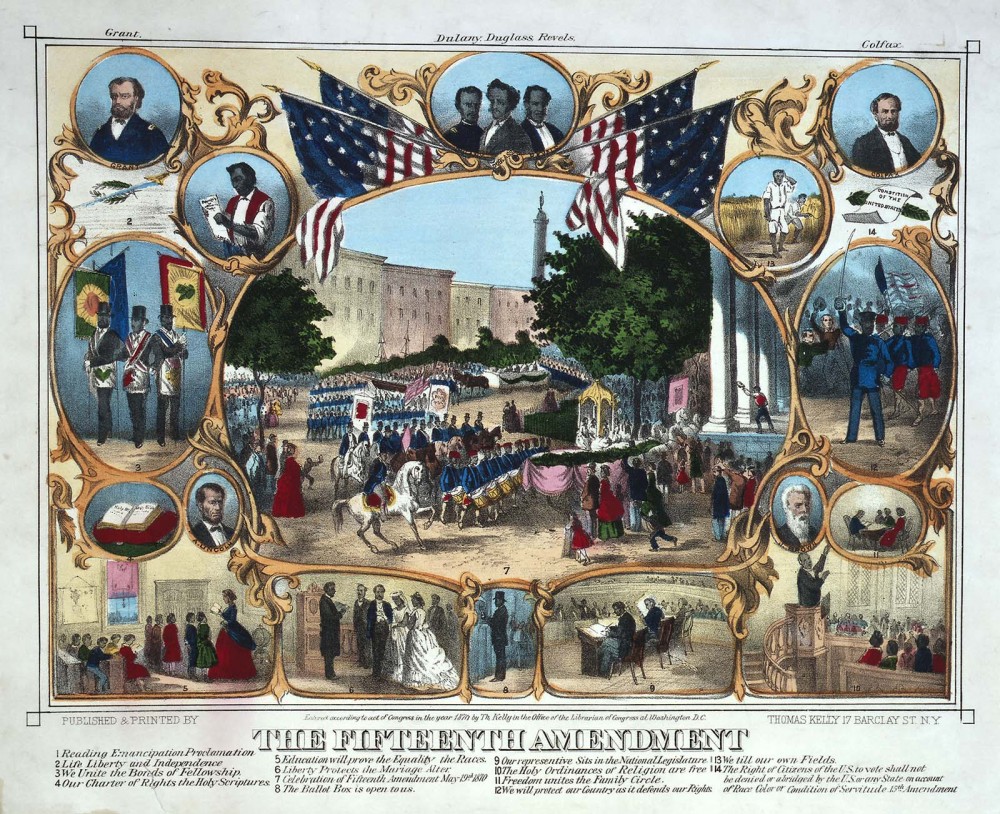 The Fifteenth Amendment gave male citizens, regardless of race, color, or previous status (i.e. slavery), the right to vote. While the amendment was not all encompassing in that women were not included, it was an extremely significant ruling in establishing the liberties of African American men. This print depicts a huge parade held in Baltimore, Maryland, on May 19, 1870, surrounded by portraits of abolitionists and scenes of African Americans exercising their rights. Thomas Kelly after James C. Beard, “The 15th Amendment. Celebrated May 19th 1870,” 1870. Library of Congress.

The Civil War showed white women, especially upper-class women, life without their husbands’ protection. Many did not like what they saw, especially in an uncertain future with the possibility of racial equality. Formerly wealthy women hoped to maintain their social status by rebuilding the prewar social hierarchy. Through the Ladies Memorial Association and other civic groups, southern women led the efforts to bury and memorialize the dead, praising and bolstering their men’s masculinity through nationalist speeches and memorials. The Ladies Memorial Association grew out of the Soldiers’ Aid Society and became the precursor and custodian of the Lost Cause narrative. LMAs and their ceremonies “adopted a fairly uniform look,” but celebrated locally important dates. For instance, some LMAs celebrated on May 10th, the anniversary of Stonewall Jackson’s death. Through these activities, southern women took on a more political role in the South.

Southern black women also sought to redefine their public and private lives. Their efforts to control their labor met the immediate opposition of southern white women. Gertrude Clanton, a plantation mistress before the war, disliked cooking and washing dishes, so she hired an African American woman to do the washing. A misunderstanding quickly developed. The laundress, nameless in Gertrude’s records, performed her job and returned home. Gertrude believed that her money had purchased a day’s labor, not just the load of washing, and she became quite frustrated. Meanwhile, this washerwoman and others like her set wages and hours for themselves, and in many cases began to take washing into their own homes in order to avoid the surveillance of white women.

For all of their differences, white and black Southern women faced a similar challenge during Reconstruction. Southern women celebrated the return of their brothers, husbands, and sons, but couples separated for many years struggled to adjust. To make matters worse, many of these former soldiers returned with physical or mental wounds. For white families, suicide and divorce became more acceptable, while the opposite occurred for black families. Since the entire South suffered from economic devastation, many families were impoverished and sank into debt. Southern women struggled to rebuild stability on unstable ground. All Southern women faced economic devastation, lasting wartime trauma, and enduring racial tensions.