By the fall of 1916 and spring of 1917, President Wilson believed an imminent German victory would drastically and dangerously alter the balance of power in Europe. With a good deal of public support inflamed by submarine warfare and items like the Zimmermann telegram (which revealed a German menace in Mexico), Congress declared war on Germany on April 4th, 1917. Despite the National Defense Act of 1916 and Naval Act of 1916, America faced a war three thousand miles away with a small and unprepared military. The United States was unprepared in nearly every respect for modern war. Considerable time elapsed before an effective Army and Navy could be assembled, trained, equipped, and deployed to the Western Front in Europe. The process of building the Army and Navy for the war proved to be different from previous American conflicts and counter to the European military experience. Unlike the largest European military powers of Germany, France, and Austria-Hungary, no tradition existed in the United States to maintain large standing armed forces or trained military reserves during peacetime. Moreover, there was no American counterpart to the European practice of rapidly equipping, training, and mobilizing reservists and conscripts.

America relied solely on traditional volunteerism to fill the ranks of the armed forces. Notions of patriotic duty and adventure appealed to many young men who not only volunteered for wartime service, but sought and paid for their own training at Army camps before the war. American labor organizations favored voluntary service over conscription. Labor leader Samuel Gompers argued for volunteerism in letters to the Congressional committees considering the question. “The organized labor movement,” he wrote, “has always been fundamentally opposed to compulsion.” Referring to American values as a role model for others, he continued, “It is the hope of organized labor to demonstrate that under voluntary conditions and institutions the Republic of the United States can mobilize its greatest strength, resources and efficiency.” 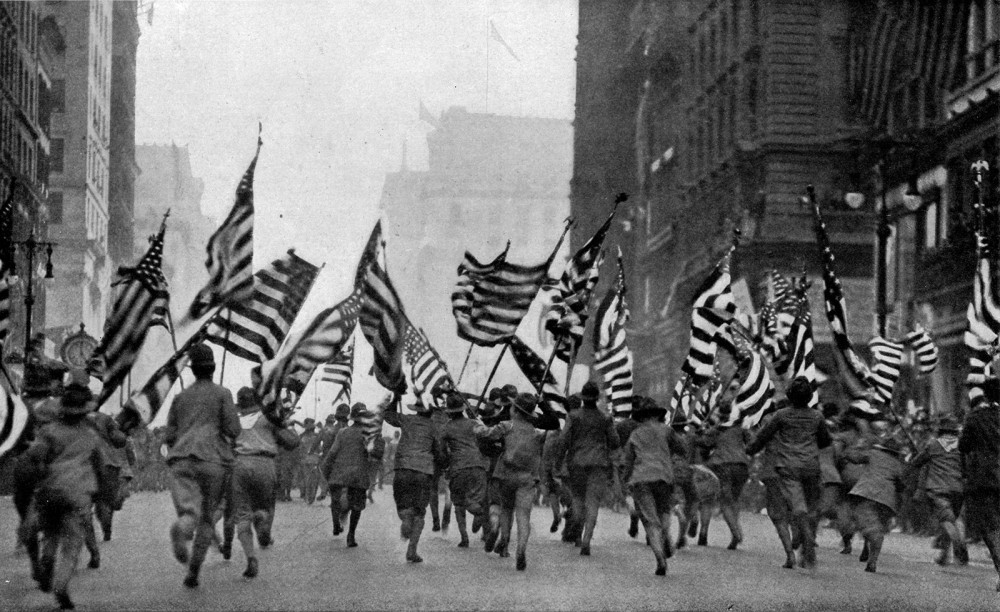 Moments like this—with the Boy Scouts of America charging up Fifth Avenue in New York City with flags in their hands—signaled to Americans that it was time to wake up to the reality of war and support the effort in any way possible. “Wake Up, America” parades like this one were throughout the country in support of recruitment. Nearly 60,000 people attended this single parade in New York City. Photograph from National Geographic Magazine, 1917. Wikimedia.

Though some observers believed that opposition to conscription might lead to civil disturbances, Congress quickly instituted a reasonably equitable and locally administered system to draft men for the military. On May 18, 1917, Congress approved the Selective Service Act, and President Wilson signed it into action a week later. The new legislation avoided the unpopular system of bonuses and substitutes used during the Civil War and was generally received without serious objection by the American people.

The conscription act initially required men from ages 21 to 30 to register for compulsory military service. The basic requirement for the military was to demonstrate a competitive level of physical fitness. These tests offered the emerging fields of social science a range of data collection tools and new screening methods. The Army Medical Department examined the general condition of young American men selected for service from the population. The Surgeon General compiled his findings from draft records in the 1919 report, “Defects Found in Drafted Men,” a snapshot of the 2.5 million men examined for military service. Of that group, 1,533,937 physical defects were recorded (often more than one per individual). More than thirty-four percent of those examined were rejected for service or later discharged for neurological, psychiatric, or mental deficiencies.

To provide a basis for the neurological, psychiatric, or mental evaluations, the Army assessed eligibility for service and aptitude for advanced training through the use of cognitive skills tests to determine intelligence. About 1.9 million men were tested on intelligence. Soldiers who were literate took the Army Alpha test. Illiterates and non-English speaking immigrants took the non-verbal equivalent, the Army Beta test, which relied on visual testing procedures. Robert M. Yerkes, president of the American Psychological Association and chairman of the Committee on the Psychological Examination of Recruits, developed and analyzed the tests. His data suggested that the mental age of recruits, in particular immigrant recruits from southern and eastern Europe, averaged about thirteen years. As a eugenicist, he interpreted the results as roughly equivalent to a mild level of retardation and as an indication of racial deterioration. Many years later, experts agreed the results misrepresented the levels of education for the recruits and revealed defects in the design of the tests.

The experience of service in the Army expanded many individual social horizons as natives and immigrants joined the ranks. Immigrants had been welcomed into Union ranks during the Civil War with large numbers of Irish and Germans who had joined and fought alongside native born men. Some Germans in the Civil War fought in units where German was the main language. Between 1917 and 1918, the Army accepted immigrants with some hesitancy because of the widespread public agitation against “hyphenated Americans” that demanded they conform without delay or reservation. However, if the Army appeared concerned about the level of assimilation and loyalty of recent immigrants, some social mixtures simply could not be tolerated within the ranks. 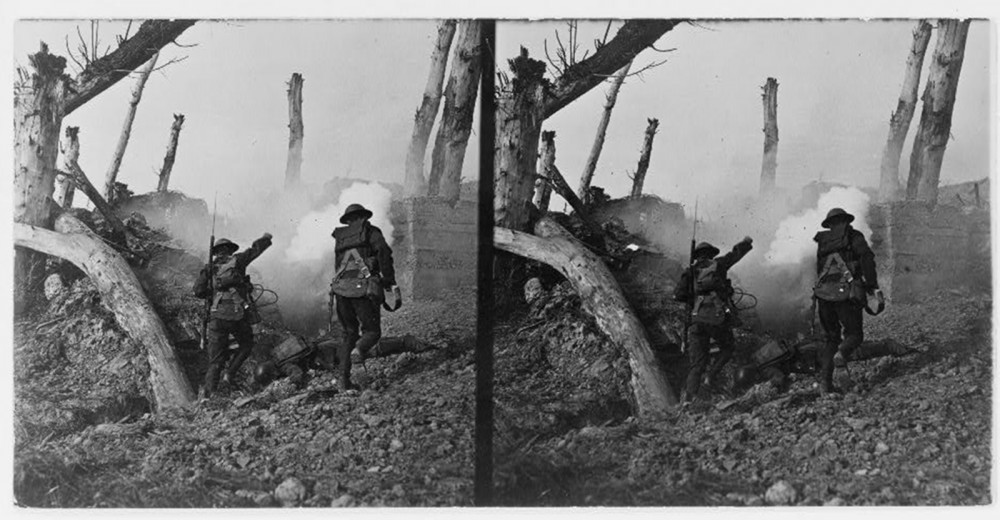 Propagandistic images increased patriotism in a public relatively detached from events taking place overseas. This photograph, showing two United States soldiers sprinting past the bodies of two German soldiers toward a bunker, showed Americans the heroism evinced by their men in uniform. Likely a staged image taken after fighting ending, it nonetheless played on the public’s patriotism, telling them to step up and support the troops. “At close grips with the Hun, we bomb the corkshaffer’s, etc.,” c. 1922?. Library of Congress.

Prevailing racial attitudes mandated the assignment of white and black soldiers to different units. Despite racial discrimination and Jim Crow, many black American leaders, such as W. E. B. DuBois, supported the war effort and sought a place at the front for black soldiers. Black leaders viewed military service as an opportunity to demonstrate to white society the willingness and ability of black men to assume all duties and responsibilities of citizens, including the wartime sacrifice. If black soldiers were drafted and fought and died on equal footing with white soldiers, then white Americans would see that they deserved to full citizenship. The War Department, however, barred black troops from combat specifically to avoid racial tensions. The military relegated black soldiers to segregated service units where they worked in logistics and supply and as general laborers.

In France, the experiences of black soldiers during training and periods of leave broadened their understanding of the Allies and life in Europe. The Army often restricted the privileges of black soldiers to ensure the conditions they encountered in Europe did not lead them to question their place in American society. However, black soldiers were not the only ones feared to be at risk by the temptations of European vice. To ensure that American “doughboys” did not compromise their special identity as men of the new world who arrived to save the old, several religious and progressive organizations created an extensive program designed to keep the men pure of heart, mind, and body. With assistance from the Young Men’s Christian Association (YMCA) and other temperance organizations, the War Department put together a program of schools, sightseeing tours, and recreational facilities to provide wholesome and educational outlets. The soldiers welcomed most of the activities from these groups, but many still managed to find and enjoy the traditional recreational venues of soldiers at war.

While the War and Navy Departments initiated recruitment and mobilization plans for millions of men, women reacted to the war preparations by joining several military and civilian organizations. Their enrollment and actions in these organizations proved to be a pioneering effort for American women in war. Military leaders authorized the permanent gender transition of several occupations that gave women opportunities to don uniforms where none had existed before in history. Civilian wartime organizations, although chaired by male members of the business elite, boasted all-female volunteer workforces. Women performed the bulk of volunteer charitable work during the war.

The military faced great upheaval with the admittance of women in the war. The War and Navy Departments authorized the enlistment of women to fill positions in several established administrative occupations. The gendered transition of these jobs freed more men to join combat units. Army women served as telephone operators (Hello Girls) for the Signal Corps, Navy women enlisted as Yeomen (clerical workers), and the first groups of women joined the Marine Corps in July 1918. For the military medical professions, approximately 25,000 nurses served in the Army and Navy Nurse Corps for duty stateside and overseas, and about a hundred female physicians were contracted by the Army. Neither the female nurses nor the doctors served as commissioned officers in the military. The Army and Navy chose to appoint them instead which left the status of professional medical women hovering somewhere between the enlisted and officer ranks. As a result, many female nurses and doctors suffered various physical and mental abuses at the hands of their male coworkers with no system of redress in place.

The experiences of women in civilian organizations proved to be less stressful than in the military. Millions of women volunteered with the American Red Cross, the Young Men’s and Women’s Christian Associations (YMCA/YWCA), and the Salvation Army. Most women performed their volunteer duties in communal spaces owned by the leaders of the municipal chapters of these organizations. Women met at designated times to roll bandages, prepare and serve meals and snacks, package and ship supplies, and organize community fundraisers. The variety of volunteer opportunities that existed gave women the ability to appear in public spaces and promote charitable activities for the war effort. Women volunteers encouraged entire communities, including children, to get involved in war work. While most of these efforts focused on support for the home front, a small percentage of women volunteers served with the American Expeditionary Force in France.

Jim Crow segregation in both the military and the civilian sector stood as a barrier for black women who wanted to give their time to the war effort. The military prohibited black women from serving as enlisted or appointed medical personnel. The only avenue for black women to wear a military uniform existed with the armies of the allied nations. A few black female doctors and nurses joined the French Foreign Legion to escape the racism in the American Army.  Black women volunteers faced the same discrimination in civilian wartime organizations. White leaders of American Red Cross, YMCA/YWCA, and Salvation Army municipal chapters refused to admit them as equal participants. Black women were forced to charter auxiliary units as subsidiary divisions to the chapters and given little guidance in which to organize fellow volunteers. They turned instead to the community for support and recruited millions of women for auxiliaries that supported the nearly 200,000 black soldiers and sailors serving in the military. While the majority of women volunteers labored to care for black families on the homefront, three YMCA secretaries received the opportunity of a lifetime to work with the black troops in France.