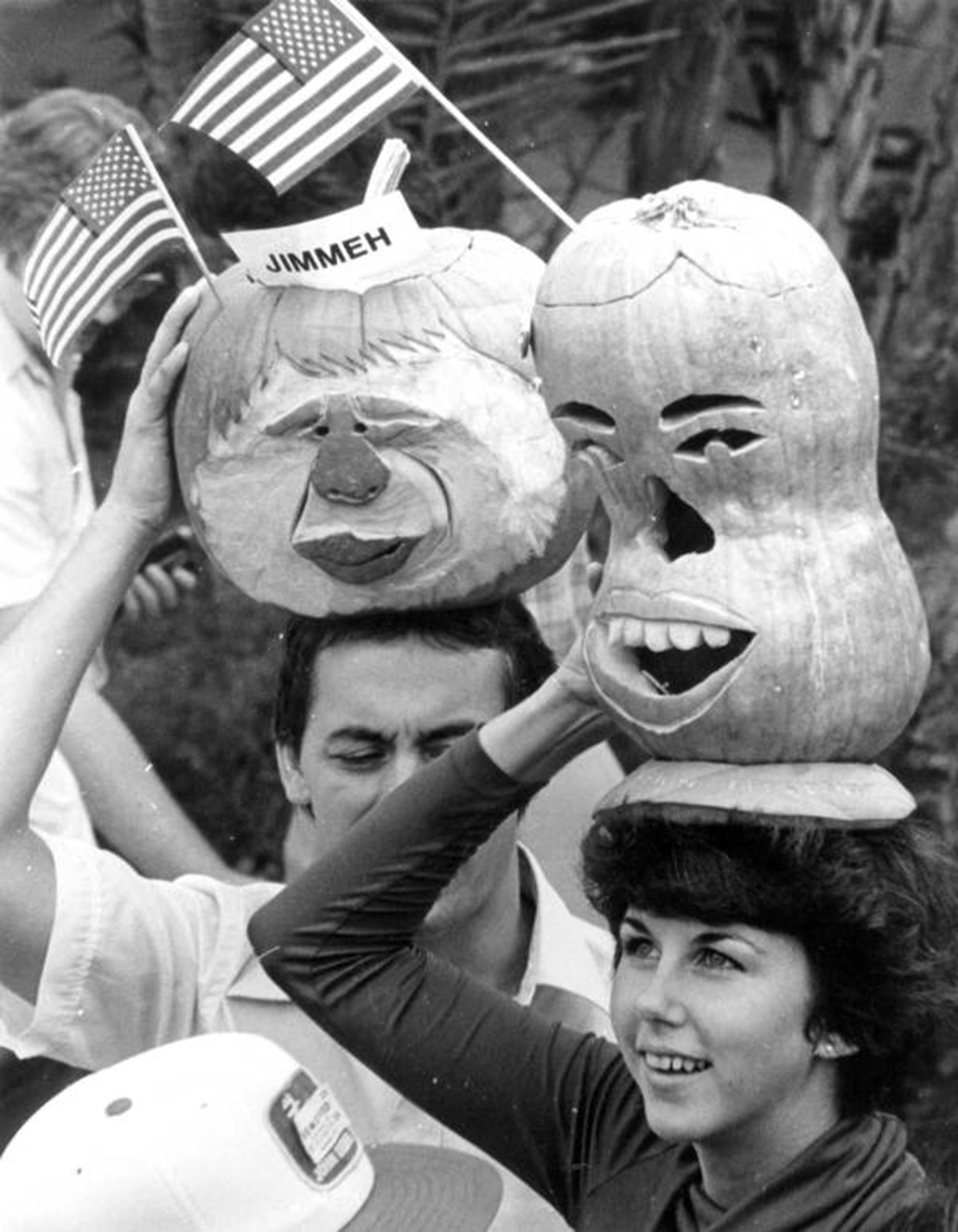 Pumpkins carved in the likeness of President Jimmy Carter in Polk County, Florida, October 1980, State Library and Archives of Florida via Flickr.

Watergate weighed on voters’ minds. Nixon’s disgrace netted big congressional gains for the Democrats in the 1974 mid-term elections. President Ford, the presumptive Republican nominee in 1976, damaged his popularity by pardoning Nixon. Voters seemed to want a Washington outsider untainted by the Beltway politics of the previous decade.

After the chaos of the 1968 Chicago convention, the Democrats reformed party rules to bring in women, African Americans, young people, and Spanish speakers. One way the committee sought to improve popular participation (as well as stifle backstage maneuvering and public bickering) to increase the weight of caucuses and primaries on the presidential nomination process, reducing the machinations of party officials at the convention. Jimmy Carter and his energetic staff of Georgians understood the importance of these primaries and spent two years traveling the country, getting to know local Democrats and winning grassroots support.

Unlike his Democratic opponents—and unlike President Ford—Carter was a Washington outsider. He was unidentified with either his party’s liberal or conservative wings. Indeed, his appeal was more personal and moral than political. He ran on no great political issues. Instead, crafting an optimistic campaign centered on the slogan, “Why not the best?,” he let his background as a hardworking, honest, Southern Baptist navy-man ingratiate him to voters around the country, especially in his native South, where support of Democrats had wavered in the wake of the civil rights movement. Carter’s wholesome image was painted in direct contrast to the memory of Nixon and by association with the man who pardoned him, his vice president, Gerald Ford. Carter sealed his party’s nomination in June and won a close victory in November.

When Carter assumed took the oath of office on January 20, 1977, he became president of a nation in the midst of economic turmoil. Oil shocks, inflation, stagnant growth, unemployment, and sinking wages weighed down the nation’s economy. The age of affluence was over, and the unraveling had begun, culminating deeply rooted problems that had lain dormant during the long postwar prosperity. 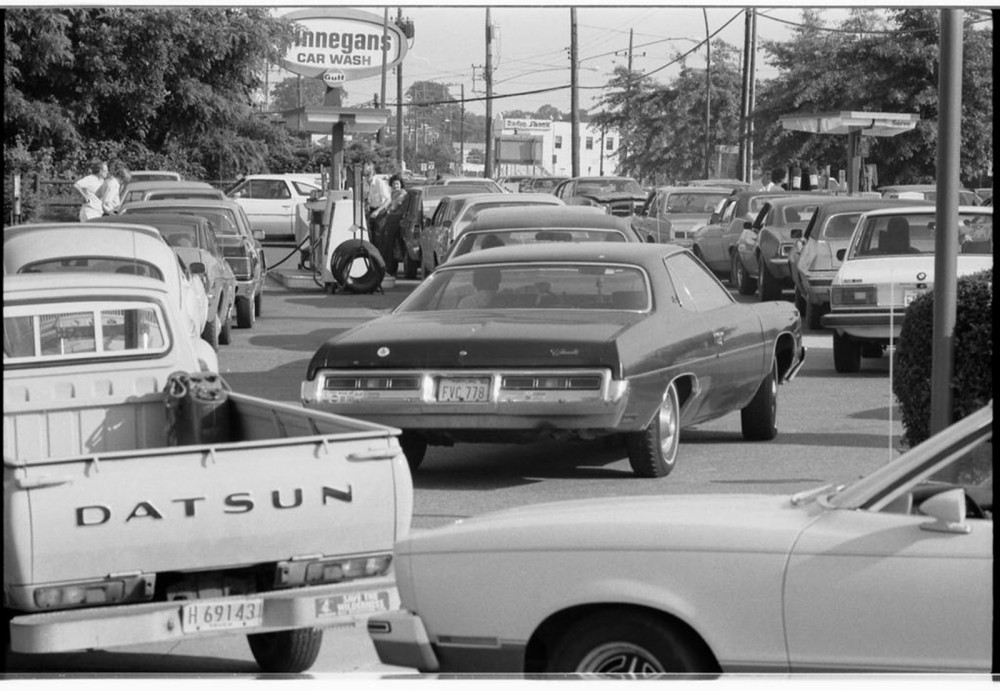 At the end of the Second World War, American leaders erected a complex system of trade policies to help rebuild the shattered economies of Western Europe and Asia. In the glow of the Cold War, American diplomats and politicians used trade relationships to win influence and allies around the globe and they saw the economic health of their allies, particularly West Germany and Japan, as a crucial bulwark against the expansion of communism. Americans encouraged these nations to develop vibrant export-oriented economies and tolerated restrictions on U.S. imports. This came at great cost to the United States. As the American economy stalled, Japan and West Germany soared and became major forces in the global production for autos, steel, machine tools, and electrical products. By 1970, the United States began to run massive trade deficits. The value of American exports dropped and the prices of its imports skyrocketed. Coupled with the huge cost of the Vietnam War and the rise of oil-producing states in the Middle East, growing trade deficits sapped the United States’ dominant position in the global economy.

American leaders didn’t know how to respond. After a series of negotiations with leaders from France, Great Britain, West Germany, and Japan in 1970 and 1971, the Nixon administration allowed these rising industrial nations to continue flouting the principles of free trade by maintaining trade barriers that sheltered their domestic markets from foreign competition while at the same time exporting growing amounts of goods to the United States, which no longer maintained so comprehensive a tariff system. By 1974, in response to U. S. complaints and their own domestic economic problems, many of these industrial nations overhauled their protectionist practices but developed even subtler methods, such as state subsidies for key industries, to nurture their economies.

Carter, like Ford before him, presided over a hitherto unimagined economic dilemma: the simultaneous onset of inflation and economic stagnation, a combination popularized as “stagflation.” Neither Carter nor Ford had the means nor the ambition to protect American jobs and goods from foreign competition. As firms and financial institutions invested, sold goods, and manufactured in new rising economies, such as Mexico, Taiwan, Japan, Brazil, and elsewhere, American politicians allowed them to sell their often less costly products in the United States.

As American officials institutionalized this new unfettered global trade, many suffering American manufacturers perceived only one viable path to sustained profitability: moving overseas, often by establishing foreign subsidiaries or partnering with foreign firms. Investment capital, especially in manufacturing, fled the U. S. looking for overseas investments and hastened the decline in the productivity of American industry while rising export-oriented industrial nations flooded the world market with their cheaply produced goods. Global competition swiftly undermined the dominance enjoyed by American firms. By the end of the decade, the United States suffered from perennial trade deficits and weakened U.S. industry while many Americans suffered eroded job security and stagnating incomes.

As Carter failed to slow the unraveling of the American economy, he also struggled to shift American foreign policy away from blind anti-communism toward a human-rights based agenda. Carter was a one-term Georgia governor with little foreign policy experience and few knew what to expect from his presidency. Carter did not make human rights a central theme of his campaign. Only in May 1977 did the new president offer a definitive statement when, speaking before the graduating class at the University of Notre Dame, he declared his wish to move away from a foreign policy in which “an inordinate fear of communism” caused American leaders to “adopt the flawed and erroneous principles and tactics of our adversaries.” (Cold War foreign policy, he said, had resulted in the “profound moral crisis” of the Vietnam War.) Carter proposed instead “a policy based on constant decency in its values and on optimism in our historical vision.” Carter’s focus on human rights, mutual understanding, and peaceful solutions to international crises resulted in some successes. Under Carter, the U. S. either reduced aid to or ceased aiding altogether the American-supported right-wing dictators guilty of extreme human rights abuses in places such as South Korea, Argentina, and the Philippines. And despite intense domestic opposition, in September 1977, partly under the belief that such a treaty would signal a renewed American commitment to fairness and respect for all nations, Carter negotiated the return of the Panama Canal to Panamanian control. 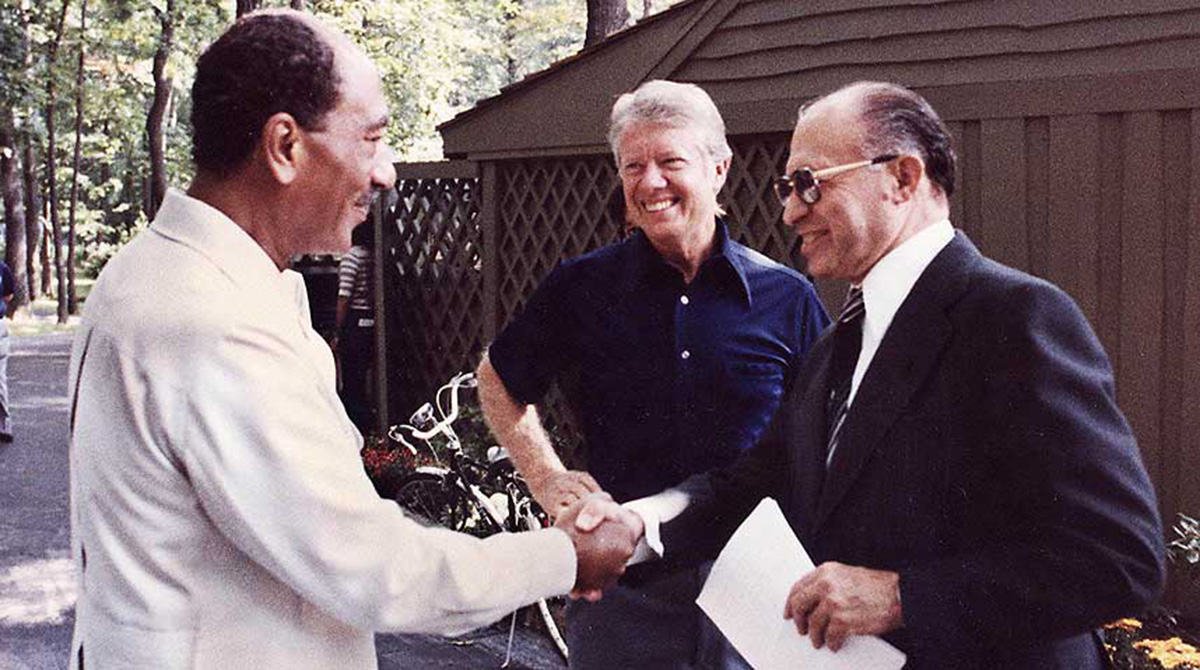 Carter’s arguably greatest foreign policy achievement was the Camp David Accords. In September 1978, Carter negotiated a peace treaty between Israeli Prime Minister Menachem Begin and Egyptian President Anwar Sadat. After thirteen days of secret negotiations hosted by Carter at the presidency’s rural Maryland retreat, Camp David, two agreements were reached. The first established guidelines for Palestinian autonomy and a set of principles that would govern Israel’s relations to its Arab neighborhoods. The second provided the basis for Egyptian-Israeli peace by returning the Sinai Peninsula to Egyptian control and opening the Suez Canal to Israeli ships. The Accords, however, had significant limits. Though Sadat and Begin won a Nobel Peace Prize for their efforts, the Accords were as significant for what they left unresolved as for what they achieved. Though they represented the first time since the establishment of Israel that Palestinians were promised self-government and the first time that an Arab state fully recognized Israel as a nation, most of the Arab world rejected the Accords. The agreement ensured only limited individual rights for Palestinians and precluded territorial control or the possibility of statehood. Indeed, Palestinian Liberation Organization (PLO) chairman Yasser Arafat later described the Accords’ version of Palestinian autonomy as, “no more than managing the sewers.”

Carter, however, could not balance his insistence on human rights with the realities of the Cold War. While his administration reduced aid to some authoritarian states, the U.S. continued to provide military and financial support to allies it considered truly vital to American interests—most notably, the oil-rich nation of Iran. When the President and First Lady (Rosalynn Carter) visited Tehran in January 1978, the President praised the nation’s dictatorial ruler, Shah Reza Pahlavi and remarked on the “respect and the admiration and love” of Iranians for their leader. A year later, the Iranian Revolution deposed the Shah. In November, 1979, revolutionary Iranians, irate over America’s interventions in Iranian affairs and its long support of the Shah, stormed the U. S. embassy in Tehran and took fifty-two Americans hostage. At the same time, Americans again felt the energy pinch when revolutionaries shut down Iranian oil fields, spiking the price of oil for the second time in a decade. Americans not only felt the nation’s weakness at the gas pump, they watched it every night on national television: for many Americans, the hostage crisis that stretched across the next 444 days became a source of both jingoistic unity and a constant reminder of the country’s new global impotence. The nation that had defeated the Nazis and the Empire of Japan in the Second World War found itself, thirty years later, humiliated by both half of an obscure southeast Asian country and a relatively small and unstable Middle Eastern nation.

With his popularity plummeting Carter, in April 1980, ordered a secret rescue mission, Operation Eagle Claw, that ended in disaster. A U. S. helicopter crashed in the middle of the desert, killing eight servicemen, and leading Carter to take responsibility for the losses and the continued inability to free the American hostages.

Moreover, Carter’s efforts to ease the Cold War by achieving a new nuclear arms control agreement (SALT II) disintegrated under domestic opposition led by conservative hawks such as Ronald Reagan. They accused Carter of weakness, and cited Soviet support for African leftist revolutionaries as evidence of Soviet duplicity. And then the Soviets invaded Afghanistan in December 1979, returning the Cold War to the forefront of U.S. foreign policy. A month later, a beleaguered Carter committed the United States to defending its “interests” in the Middle East against Soviet incursions, declaring that “an assault [would] be repelled by any means necessary, including military force.” Known as the “Carter Doctrine,” the President’s declaration signaled the administration’s ambivalent commitment to human rights and a renewed reliance on military force in its anti-communist foreign policy. The seeds of Ronald Reagan’s more aggressive foreign policy had been sown.